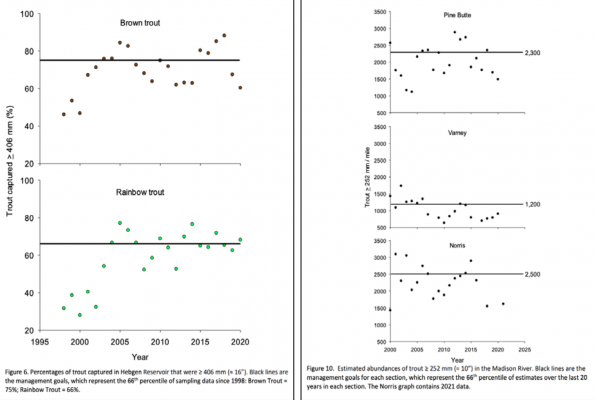 Trout fisheries are below 20-year averages in the upper reaches of the Madison River and at Hebgen Reservoir. While Hebgen and Madison dams work in part to mitigate temperatures and maintain flows, an already hot summer heightens concern for the forests and the fish.

Every year, Fish Wildlife & Parks (FWP) biologists complete an annual report for NorthWestern Energy (NWE) on topics pertaining to the health of the Madison River fisheries and what effect dams have on the fisheries. NWE is the owner and operator of both the Madison and Hebgen dams, and with help from the FWP report, NWE can obtain a Federal Energy Regulatory Commission (FERC) license that allows NWE to operate hydropower systems on both dams.

The agreement between FWP and NWE allowing hydropower systems on both dams and seven others on the Missouri River is referred to as the 2188 Project. The 2188 Project lists requirements for NWE to follow to operate the dams. NWE established a ten-year memorandum of understanding with state and federal resource management agencies to provide annual funding for implementing FERC license requirements, which include protection, mitigation and enhancement (PM&E) of fisheries, recreation and wildlife resources.

Hebgen Dam forms the Hebgen Reservoir and serves as a water storage facility to control flow into the Madison Dam. Madison Dam, which forms Ennis Lake, is a power generating dam, but is not generating power this year due to turbine replacements. Both are meant to address thermal issues in the Madison River below the Madison Dam and provide year-round minimum flows of 1,100 cfs. Maintaining flows is a component of the FERC license.

“Generally speaking, the entire Madison has great flows compared to most other rivers because of the dam and also that pulsing in the lower river,” Travis Horton, FWP Region 3 fisheries manager, said. He mentioned that as the summer progresses, many if not all major rivers will experience fishing closures, pushing the traffic to the Missouri and the Madison. With the Madison Dam not generating power this year, the dams exist to maintain Hebgen Reservoir levels and keep fish from dying in the lower Madison, Horton said.

Horton described the effects of pulsing as a simple physics concept—a smaller pot boils faster. More water released into the river keeps the temperatures low. After fish kills in the 1980s below Ennis Lake and water temperatures reaching 88 degrees, NWE built a model to tell the dams how much water to let go to prevent temperatures from getting to 80 degrees.

The results from the 2020 report for NWE are mixed, but overall, trout populations are below 20-year averages in both Hebgen Reservoir and the Madison River. The report defines the most concerning portion being the near lack of brown trout 6-11 inches in the Norris section of the Madison River in 2021. This section reached a 20-year low of 459 brown trout/mile this year.

Brown and rainbow trout were below management goals for Hebgen Reservoir in 2020. Brown trout were estimated to have decreased by 56% since reaching a 20-year net catch peak in 2017.

“Although this is concerning when considering recent declines in brown trout elsewhere in Montana including the Madison River, similar trends have been observed over the last 20 years,” the report noted. Rainbow trout and their sizes were trending upward, while brown trout sizes remained below management goals.

Brown and rainbow trout at least six inches long were below the 20-year average in the upper Madison.

Rainbow trout at least six inches long were above average in the Varney to Eight Mile Ford Fishing Access Site (FAS), the highest number of rainbow trout in this section in 20 years. Most of these rainbow trout were one-year old and only 250 out of thousands were over 11 inches. Brown trout were stable for the fourth year in a row in the Varney section.

“It makes me think there’s a release of competition and predation from adults because they’re not there and that allowed the recruitment to be really high,” Horton said. A lack of larger and older fish may have allowed for the younger population to thrive in the upper river. If these fish survive that would bode well for the fishery, but Horton brought up that the 2019 class did not see many fish reach adulthood.

“Overall, the trout fisheries are below average. The lower river is worse for brown trout…and that one is kind of a poster child for the general decline we’ve seen in brown trout. Low density, overall lack of juveniles and still a bit higher proportion of large fish,” Horton said.

On June 25, FWP enacted a hoot owl closure from 2 p.m. until midnight from Madison Dam to the Madison River’s confluence with the Jefferson River at Headwaters State Park. Hoot owl closures are initiated when river temperatures exceed 75 degrees for three days or more. Expanding the closure to the dam was deemed necessary due to whitefish and trout mortalities observed last month.

The cause for the May fish kills is still undetermined, but Horton said the more conservative we can be on the lower Madison, the better. With unseasonal high temperatures in mind, Horton is concerned about what that may mean for the fisheries this summer.