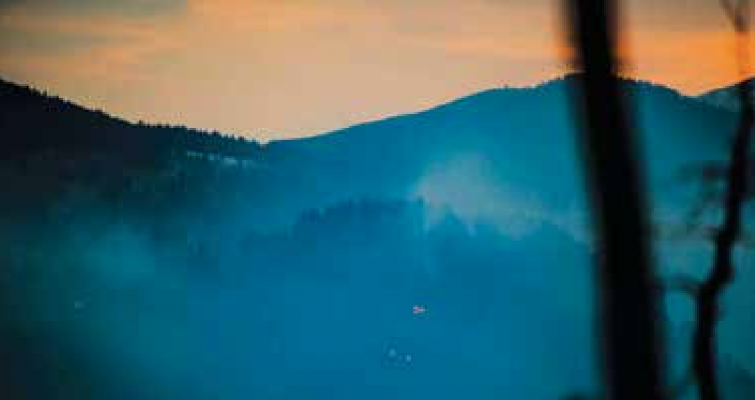 Fire engines from the Beaverhead-Deerlodge Forest Service (FS) and the Helena-Lewis and Clark FS responded, along with the Madison Valley Rural Fire Department and the Montana Department of Natural Resources and Conservation (DNRC). One helicopter worked the fire on Friday.

Jeff Barnes, Beaverhead-Deerlodge National Forest (BDNF) engine captain and lead on the Elk Lake fire, extended his thanks to the Madison Valley Rural Fire Department for their quick response and additional resources.

Initial response on Friday to the Elk Lake fire was focused on valley risk and making sure structures were protected. The Elk Lake Lodge was not affected as it sits on the opposite side of Elk Lake from the fire, King said.

Joe Brummell, director of emergency management in Madison County, said multiple startup fires were reported over the past week. “You can’t blame it on lightening right now,” Brummell said. McRae said last Monday 31 active fires were being tracked in the BDNF.

The Elk Lake fire was a human start, King said, “but outside of that we don’t know what it was.” This fire is not currently being investigated, but the Sourdough fire—which has burned up to 5,000 acres—by Sourdough Peak near Dillon, is under investigation, McRae explained.

BDNF encourages the public to ensure warming fires are completely extinguished, McRae said. King said in a normal year there is enough snow or moisture to help put the fires out, but the current dry conditions allow them to continue burning.

As of Monday, the Elk Lake Fire was snow covered. Timber in the area was still smoldering and burning in some cases. McRae said smoke would be visible for a while and that the fire grew to about 1,500 acres. Crews will commence the cleanup operation and will walk the fire and access the containment level, which is made more difficult to gage by the snow. No structures have been damaged.

“We really appreciate the general public’s understanding that a fire was going on out there and were not actively trying to get into the area,” McRae said. BDNF did not need to issue a closure order.