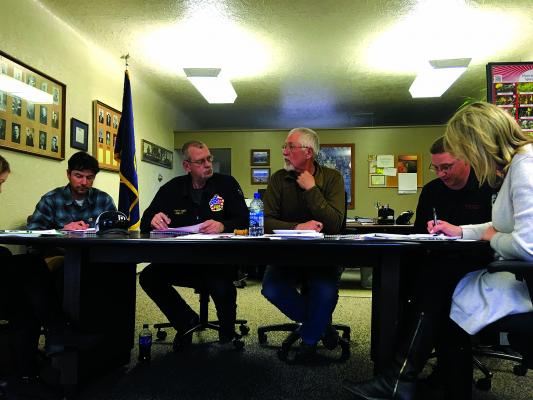 SHERIDAN – You know it’s spring when the baseballs start coming out, and in Sheridan, Little League is moving ahead, gearing up for baseball season, which began April 13, the town council learned at its Monday, April 8, meeting.

Lyra Hyndman and Hana Dietrich came to council to ask for some help getting the ball field and dugout back in better shape.

Hyndman and Dietrich pitched a plan to improve the dugout. They said they would donate the stain, IMOC would donate roofing, sandpaper and paint to spruce up the dugout.

What they needed and wanted from the town was a donation for fencing in front of the dugout and in the outfield and two plaques dedicating the field and both dugouts to Art Bieler, a cost of about $200.

The plaques would be 5 x 7 commemorations of Bieler. The fencing was needed to cover a hole in the outfield and across the dugouts.

Another ballfield issue was gravel in the infield. Hyndman and Dietrich said it was tough for ball players to slide on this surface, that many skinned knees and elbows doing so.

Council approved a $250 donation to the Little League, to be used to purchase fencing and the plaques.

Stump said bids for drilling the new well had been opened and a contract was in front of the U.S. Department of Agriculture’s Rural Development (RD) team working on Sheridan’s well.

The town received two bids for drilling the new well, one from O’Keefe Drilling Company, in Butte;  one from Coldwater Drilling & Pumps, in Arlee. The low bid, Coldwater’s, was for $275,000, about $5,000 less than the engineer’s estimate.

The next step was sending a letter to RD with the bid package, recommending that RD approve Coldwater’s bid and give the go-ahead to drill the new well. RD had 15 days to do this, Stump said.

Another issue was the railroad permit/lease, for the distribution line from the new well. Stump was in touch with the railroad to accomplish this.

Stump expected RD to award the contract as soon as possible after approval.

The problem was all the delays – again – were driving everyone connected with the project batty, waiting for governmental approvals: Coldwater was anxious to get working on the project because he had other projects to complete. Stump also has been worried that the continued bureaucratic delays bumped the timing of more water for Sheridan back.

He laid out a time line of the well being completed between May and June, a transmission line for the water being done by August, which means that throughout the prime growing season, water would again be in short supply.

“No different than last summer,” Stump said. This could result in watering restrictions again, he told council.

Stump offered an alternative: Rehabbing existing well No. 1, using a process that would essentially air-blast openings in the plugged screen intlets and rock surrounding the well casing. This could possibly up the amount of water coming into the well to 60- 80 gallons per minute.  This technique was used in Whitehall, Stump said, and it doubled the flow rate of the well.

“I’d like to proceed with this one other well so we can do some watering,” Stump told council. “But if the situation is not changed, we’re going to have to reinstitute watering restrictions: No lawn sprinklers, hand watering, using a garden hose with a hand on the nozzle.”

Stump said last summer, one well was running 24 hours a day for five days in a row, and the concern was that the pump would burn up. The flow rate of this well is currently the same as last fall, he said, although water tables are due to soon rise somewhat.

If the town could get another well back in service, it could offer residents limited irrigation, he said.

Councilman Mike Walter said priority No. 1 was fire suppression, and he thought risking the cost of rehabbing the well was worth it.

Councilman Emilie Sayler wondered how to enforce the watering restrictions. Public Works Director Curt Green said someone sneaking water wouldn’t get away with it, that it would show up on their water bill.  Stump talked about last year, how notifications were distributed throughout the community, and that anyone caught watering illegally the second time could have their water shut off.

Sayler noted that during the public hearing to increase water rates last fall, the town was promised another well. Since the council couldn’t deliver on this promise until later, she thought the town “owed it” to the public to find a way to increase water, depending on the cost of rehabbing well No. 1.

Stump said he would contact the company that offered the air blast screen cleaning and find out the cost. One figure he’d seen was $3,000. If the town could rehab the well and get more water, he’d have no problem spending $5,000, but not $25,000 to get this done, he said.

Green said the current production well is running about 8.9 hours per day to produce 150-160 gallons per minute.

Ralph Sand from the Senior Center explained that beginning in February, the new Senior Center had been gutted for restoration, and to bring it up to codes.  Sand said this included about a full kitchen, seating for 40 people, and other work. The restoration, he said, was more extensive and expensive than first thought, including the need for a water line. However, considering the $200 per square foot cost for a new 40 x 90-foot building, the $225,000 remodel project seemed like a bargain.

Seniors are currently using local churches to run their activities while the work is being done. Sand told council the water line was not needed right away, but getting it done would be a blessing.

Installing the new line was approved

“This will be something the city can be proud of,” said Sand.

Sheridan’s pool problems are resolved, according to a report from the parks district board.

Janet Doornbos and Mary Pat Graham told council that the board went through its bylaws and discovered that the parks district was up for repairs to the pool.

At March’s council meeting, it was revealed that the pool needed more than $20,000 in repairs, including filter system work, and rebuilding the pool’s boiler unit. Also on the wish list was a $9,000 pump.

Between the town, the pool club and the parks, Graham said, the money for the filter and other repairs was available, and the pump could be rebuilt for this season, then used as a backup in coming years. Replacing the pump would be a 2020 item.

“Things are looking up,” Graham said, “but if we have any other large expenditures, we’re in trouble.”

In a related matter, council approved the renewal of the yearly lease agreement for the Ruby Pool.

Previously the lot address for the production expansion was 101 East Hamilton Street. A lot line adjustment turned two lots into one, both sharing the Main Street address. This would help the brewery not have to apply for separate alcohol production licenses to cover both locations, a time-consuming and bureaucratic hassle.

Town clerk Ginger Galiger told the council that the town’s audit, done in late March, came back fine.  Galiger and council listened to Morgan Scarr, CPA with Amatics CPA Group, explain the town’s audit during a phone conference, saying it was “clean.”