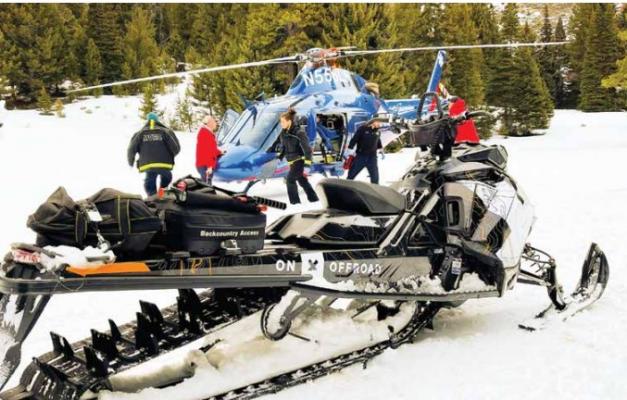 ‘Be your best for their worst day’

When you’re in the backcountry, anything can happen. Sure, that’s the reason many of us are called there: to shed the distractions of civilized life for the sanctity of the woods where nothing is programmed, and a human is just another animal walking into view. To relinquish the illusion of control is to enable a wilderness experience that can have many enlightening dimensions. But as backcountry experts will tell you, making oneself open to nature doesn’t mean being unprepared for the associated risks.

The principle codified by the Boy Scouts – “Be Prepared” – was a key element in a playbook followed by skiers, guides, EMTs, and the Madison Valley Search and Rescue team (SAR) that kept a recent skiing accident in the Tobacco Root Mountains from becoming a catastrophe.

A few weekends ago while many of us were being slightly inconvenienced by uncompromising wind and cold, the Madison Valley SAR team was facing the unforgiving steeps of the Tobacco Root Mountains to bring an injured backcountry skier to safety.

The Saturday morning at the end of February started out with the promise you experience most acutely at the beginning of a day in the mountains. Five friends from Seattle, all skilled backcountry skiers sharpened by experience, had looked forward to a weekend at Bell Lake, guided by Big Sky Backcountry Guides out of Bozeman. They were joined by two other skiers, out of state clients of the guide service owned by Drew Pogge, who were strangers at the beginning of the weekend. By the time it ended, the group was bonded in the way that having survived danger will tie lives together.

Not far from the Potosi Campground outside Pony, the five-mile Bell Lake trail is popular with hikers for its remarkable views. During the winter, intrepid skiers enjoy the climb up to Bell Lake and overnighting in a yurt owned by Pogge.

What the Seattle friends got was more adventure than anyone expected: a freak accident, multiple fractures, and an adventure tale worthy of Hemingway. Importantly, everyone in the group came away with appreciation and respect for the skills and professionalism of Pogge’s guides and Madison County’s SAR.

The tale bears telling because it has implications for everyone who enjoys recreating in Montana’s expansive backcountry.

Be aware and stay fit

Let’s face it, modern humans are used to certain creature comforts: food, warmth, safety, high-speed internet. We don’t have to make ourselves uncomfortable or scared. Yet we do, during every season in Montana. The explanations range from the practical (mental and physical well-being) to the spiritual. Some of us have no choice: we’re compelled to be out there. We all know this but should always keep it top of mind: being in the backcountry has risks. Always be aware, before and during a trip up there.

The Seattle friends are experienced skiers who had the physical strength to not only enjoy a day of rigorous activity, but were strong enough to deal with an emergency, when endurance really counted.

Communication is key, so is calm

As Paul was enjoying his second turn of the day above Bell Lake, something happened. The tip of a ski hitting a snow-buried tree branch. The skier catapulting forward at high velocity. The impact of two forms colliding.

This is where experience, preparation and training came quickly into play.

The two guides and seven skiers responded as a team, recognizing the gravity of Paul’s injuries, and swinging into action. Among Paul’s group were two physicians. Both the skiers and the guides were equipped with first aid supplies and satellite communications devices. Although the guides were familiar with a few spots where a cellular connection could be found, they were equipped with Garmin InReach, a hand-held device that allows two-way communication with emergency responders through personal smart phones.

911 was reached while the physicians and others worked to move Paul back down to the yurt where they could administer emergency medical treatment.

Then several things happened at once. The Madison County Sheriff’s office, which operates SAR (one team for the Ruby Valley, and another one for Madison Valley) dispatched a LifeFlight helicopter to the yurt where Paul was being given first aid. After making several attempts, the pilot determined that high winds would prevent a safe landing or an evacuation using a hoist or long line. Meanwhile, the ambulance service at the Madison Valley Medical Center had been notified and dispatched.

Wilderness EMT and SAR team member Steve Primm was on ambulance duty at the Ennis hospital when the call came in. Primm and EMS partner Nick Roman rushed to the base of the mountain where the helicopter was to wait for Paul.

Primm attributes the effectiveness of the rescue mission in large part to good communications and urges backcountry adventurers to carry communications devices that will connect via satellite, in case of emergency.

“Madison County's 911 dispatcher activated our EMS team and SAR. Thanks to good communications from the group at Bell Lake, we had GPS coordinates for their location, which allowed us to strategize our response and contingency plans," Primm recalled.

Among Madison Valley’s SAR volunteers are two expert snowmobilers, Rory Edwards and Mike Strong. Along with the SAR team, Edwards and Strong assessed the terrain and determined they could reach Paul’s group as it made its way slowly down from Bell Lake. Had Edwards and Strong not had the skill and determination to reach the injured man, the alternatives would have been to use a rescue toboggan kept at the yurt, or the SAR lightweight rescue sled and stabilization mattress – still effective but slower.

Madison Valley SAR has among its equipment inventory a sideby-side UTV, but it couldn’t have made the steep climb.

It wasn’t just climbing the mountain to where the party was slowly descending, the injured man making his way down on skies with the help of his friends and guides. The heavily timbered area had barely room for a skier to make a 180-degree turn. Yet Edwards and Strong handily navigated a steep slope so that the group could help Paul onto the front of Edwards’ snowmobile.

David Shoultz, one of the skiers from Seattle, recounted how the skiers, guides, SAR team, helicopter pilot and Bozeman Deaconess staff coalesced as an efficient but compassionate unit that day.

“[After the accident] we moved down the mountain as a team. There were two physicians with us. One went ahead to the yurt to prepare an exam and treatment area, while the other stayed with Paul. The snowmobilers were incredibly expert. They had to do 180-degree turns on a steep side of mountain. It was a rough ride out in rough terrain,” he recalled.

Thanks to Edwards and Strong, and despite a bumpy descent, Paul was able to board the medical helicopter much faster, and a short time later arrived at Bozeman Deaconess Hospital where he underwent surgery.

It’s another iteration of the principle that no matter how prepared you are, things can happen in the backcountry. While no amount of preparation can ensure complete safety in the wilderness, a solid plan can help you deal with unforeseen incidents.

Shoultz noted “It’s ironic that we all headed into Bell Lake looking forward to not having cell phone or internet access. As it turns out, effective satellite communications are becoming an important part of back country travel.”

He added, “What happened could happen to anyone. We were with professional guides. They were a huge part along with Madison Valley SAR of the evacuation.”

Shoultz said the other two skiers who were not part of the Seattle group “became instantaneous friends,” dedicated to a safe evacuation. “One of them accompanied Paul to the snowmobiles, side-sliding on skis to groom the trail. They said this is part of being in the backcountry. We may do a trip together next year,” he noted.

“One of the guides went all the way down to the chopper and didn’t get back to the yurt until dark. The professional guides’ role in a medical emergency became clear. The owner of the guide company drove up from Bozeman, was waiting at the chopper when we came down. One of the snowmobilers had just come from work, it was freezing cold. This made us grateful for people who give up their time to help.”

According to Shoultz, Pogge, the owner of Big Sky Backcountry Guides, also met everyone on the Monday they left for home.

When asked if he will ski again, Shoultz answered with an emphatic “yes.”

“I’ll refresh my wilderness first aid training. This was a powerful lesson that things can happen at any moment. We’ll be back to Montana and to Bell Lake,” he said.

The terrain was a skier’s delight: steep and snow-covered. For snowmobilers, not optimal, especially the tree cover.

“It was a little bit of a challenge with the snowmobile but not the worst I’ve seen,” said SAR volunteer and expert snowmobiler Mike Strong. “We caught up with the skiers about one-half mile down from the yurt. We had to get the injured skier a couple of miles down to the helicopter. He sat in the front of Rory’s snowmobile. On a few side hills I had to stop, hike up the hill, stand on an uphill ski to keep the snowmobile from rolling over.”

Strong said he knew the SARS UTV wouldn’t make it. He grew up in McAllister in a family that goes back multiple generations, and has familiarity with the country. He also uses his horses in SAR, but not that day, not in those conditions.

“I had just gotten off work when I got the call,” Strong remembered. “I’ve volunteered for at least 16 years. Have been around snowmobiles all my life. Rory and I took two snowmobiles up to the scene. We volunteers have a saying: ‘be your best for their worst day’.”

Strong is also the assistant chief, Ennis Fire Dept. He stays busy year-round. When asked what he likes to do on his days off during the winter, he said, predictably: “snowmobiling.”

If it happens to you…

“I had a great first day skiing up at Bell Lake,” said Paul, who is recovering but was eager to express gratitude for everyone who helped him that day. “Then on the second day, I felt strong on the climb up. On the second turn, something happened.”

“All of us and our guides were well-prepared,” he recalled. “We had the right equipment. No one panicked. We had good communications. I give huge credit to Big Sky Backcountry Guides. By its nature, backcountry skiing is risky. Everyone made the decision to be there and prepared to be there. Sometimes things happen in the backcountry.

“The snowmobilers made it up farther than we thought they would. They were generous, kind, and skilled. I appreciate Madison Valley SAR. Also, we didn’t know the area, would not have gone out without guides.”

Also an avid climber, Paul cited an admonition from famous mountaineer Ed Viesturs: “Getting to the top is optional. Getting back down is mandatory. A lot of people forget that.”

Will he ski again? “For sure,” Paul answered.

“All of our guides are wilderness first responders,” says Pogge, the guide service owner. “I’m very serious about avalanche safety, education, helping people stay safe in the mountains. In avalanche courses we talk about this: people will get hurt in the backcountry. Have the ability to self-rescue, have tools to call for help including satellite devices. Also have wilderness medicine training.”