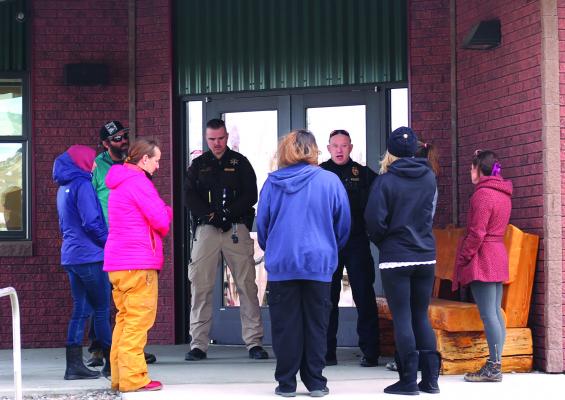 ENNIS – The Madison County Sheriff's Office dispatch center received information regarding a threat to the Ennis school last Wednesday at 9:05 a.m., and immediately notified the school. Law enforcement responded and the school was briefly placed in lock down.

After receiving notice from Madison County Dispatch, Ennis Schools went into a code yellow and sent messages via the school’s alert system to parents. A code yellow is not a full-blown lock down, but notifies staff of a possible concern and to keep students in their classroom and continue teaching.

Moore said this was the first time an incident of this nature has happened during his seven years with the Ennis Police Department. “Any perceived threat to the school, all law enforcement and school officials want to make sure everyone is safe and go to the extreme, then back off upon an investigation.”

Following an investigation, law enforcement determined the threat came from a student of the school, but found no crime had been committed. The incident has since been turned over to the school.

“It was a poor choice made by a youth mentioning a weapon and the school, but there was no credible threat to the school after looking into the call,” said Ennis Schools Superintendent Casey Klasna. “It was a poor, immature choice and that student is learning the consequences through law enforcement and the school.”

A special, closed school board meeting was held Feb. 7 to discuss the incident and disciplinary action via the school’s student code of conduct. “The handbook gives administration a lot of flexibility to make sure we still have the right to discipline students in a situation like this,” Klasna said.

Authorities are not releasing the name of the student involved due to his/her status as a minor.

‘It could happen anywhere’

With school shootings happening all over the nation, Klasna said it's important to treat any school safety concerns seriously. “It can happen anywhere – the Hardin School was just shut down because a student brought a gun to school and a teacher found it and didn’t report it,” he said. “Our teachers did an outstanding job and kept the kids calm, didn’t bring a lot of attention to it, and we had a mandatory staff meeting after to inform them of the incident and that there was no immediate danger or threat.”

Both Klasna and Officer Moore thanked the public for the help and patience during the investigation.