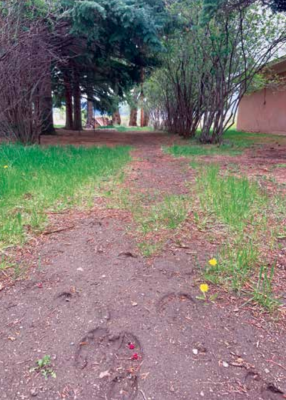 There’s a 12-foot wide stretch of seldom used alleyway between Grizzly and Armitage streets in Ennis that has caused quite a stir over the years. The narrow alley leads past two homesites to the Ennis Ditch and the Madison River beyond. This is the site of an ongoing lawsuit between one of the landowners, Michael Stears, and the Town of Ennis.

The Town of Ennis asserts the land belongs to the Town, while Stears asserts that while the alley portion leading to the ditch was dedicated to public use by Charles Armitage in 1946, the remainder leading to the river was not.

Stears cites public meeting documents from 1979 where residents of the area requested an end to public access in the alley to the ditch as teenagers were causing issues there. That request was granted by town commission, with landowners asked to split the land down the middle. In 2018 it was determined the town’s procedure in closing the alley was not sound, and the closure was undone.

Stears said when he purchased their home in 2002, he was under the assumption the alley was private or didn’t exist. When surveyors from the Town showed up to delineate the alley, red flags were also raised as to what the Town’s plan was for the stretch of land.

Stears filed a lawsuit against the Town in late 2016 seeking a quiet title to the alley. Mediations with the Town followed in 2018, but the meeting, said Stears, did not produce any negotiations or useful outcomes. An offer to swap the Armitage Alley for another 12-foot-wide public river access nearby was also turned down by the Town.

“At that point and time I would have hoped that we could have worked collaboratively on a solution,” said Stears. “But what we see moving forward it was more divisive, us against them.”

Marie continued, “Which it was never meant to be… we could have figured out a way to make it work for everybody, but the Town would not meet us on the property, would never sit down with us and talk about it.”

The Town’s contested ownership of the riverside portion of the river aside, Stears and his wife assert that access, which they said they continue to allow, was never really an issue for them, except if it was learned the Town wants to bring large numbers of people down the alley.

“We have no problem with people accessing,” said Marie. “What our issue is, is with people developing that property. It’s a wildlife crossing, we have birds that nest in the wetlands.”

Her husband agreed, adding, “Our intent is to allow access but not to develop it to the point and time we start to get into conservation risks.”

The Stearses provided the Town with a settlement proposal earlier this spring, which was met with a request for more time. The Town then met with the judge a month ago requesting more time. The town’s response was filed last week, and the process continues with no official settlement just yet.

Mike and Marie are currently readying to head to Montana from Colorado to spend their summer here. Marie said she’s frustrated and has struggled with the negative comments directed towards them from the community, but Mike said he’s cautiously optimistic that they and the Town will come to a resolution before the case goes into litigation and even more money needs to be spent.

“I am hoping in 2021 things go at a much faster pace,” said Stears, recalling that the pandemic slowed the process even more. “If you were to ask me, what can we do? I’d say, have the parties sit together. Let’s put the past behind us, meet at the land, and work like we’re people.”

The Town of Ennis’s attorney Sean Morris offered his insight on why the Town has held strongly on to its assertion the land is theirs.

“The public officials here have a real obligation to preserve public land, and rights and access,” said Morris, the litigator for the Town. “It’s a lot of what Montana is based on, this idea that we as a state really put a lot of emphasis into our public land. There is a duty of officials to defend public lands and access rights.”

Morris addressed the split of the alley, noting that a judge did agree the first potion of the alley was in fact dedicated to public land. As for the stretch that reaches the river, a request has been made for a judge to officially make that a public access point. The judge requested more information to make that decision.

Right before Covid hit, Morris said the parties came together to see if they could get the issue resolved. Perhaps the Town could fulfil its obligation to preserve the public lands, and the Stears could have limitations that would stop overcrowding and other issues. Then Covid put the brakes on the process for about a year of standstill.

Morris, like Stears, is hopeful a resolution is coming soon, within the next month or two, he said. “For us to preserve the public’s right, and at the same time satisfy the Stears’ concerns.”

If that resolution is not agreed upon, Madison County’s Judge Luke Berger will make the ultimate decision.

So, why keep fighting for the seemingly small strip of land? “It’s a really important access point since it’s the only one that accesses the river on that side of the highway,” said Morris. “Potentially this could be a fantastic thing for people to access the river. And part of me can see where they’re (the Stears) coming from, but you can’t take public land, and the Town has the obligation to defend public land.”

A group of public access advocates called The Ennis Tubing Club was recently formed in response to the Stears lawsuit. Organizer Lyndsey Lalicker said a story she heard from a long-time Ennis resident whose children used the alleyway every summer empowered her to be a part of the organization. The woman had not heard of the lawsuit, and said that now she’s uncomfortable going down there, afraid she’ll step on private property.

Lalicker and others who have floated the Madison River for years came together to create the Ennis Tubing Club to raise awareness about the lawsuit and promote the importance of protecting public access.

“I think the people in the community have the right to know what’s going on, and what the funds in the town are being used for,” said Lalicker. “It concerns me as a parent, the potential that it is blocked off, the effect that it has on all of us and future generations. Any time there is oppression, I think we all have a responsibility to stand up for the right thing, as a collective consciousness.”

The Ennis Tubing Club has also set out to make sure the community can feel comfortable to use the access. Events will be created to maintain the alleyway and long term the Club hopes to put up an Armitage Alley sign in memorial to Chuck Armitage who platted the land for public use forever.

“We want people to know what a cool thing he did and to honor him for all he gave back to Ennis,” said Lalicker “And, so people know where it is and can feel safe.”

On the Fourth of July the Tubing Club plans to hold a tubing race at Armitage Alley with all proceeds going to support the town in fighting the cause. They’ll also have a float in the Ennis parade as another effort to raise awareness.

The club has received some pushback from fishing guides who don’t want another “bikini hatch” hampering their fishing, but the club asserts this stretch of river would potentially keep floaters from getting in the way at the town access site across the river. Parking has been another concern – club members are reaching out to neighbors in the area to come up with solutions to that.

“It’s nothing personal against the gentleman filing the lawsuit,” said Lalicker, “It’s just the focus of the greater good and doing what’s right. And we plan on having fun while we are doing it.”

To learn more about the club visit https://ennistubingclub.com/