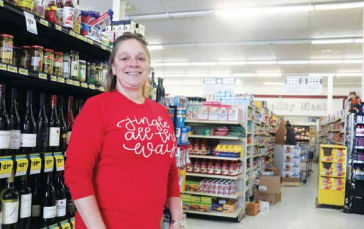 S taffing has always been a challenge for Chris Gentry, owner of Madison Foods grocery store in Ennis. But when the COVID-19 pandemic hit, the issue became even more apparent. Throw an influx of new residents coming to the area, add an increase in residents shopping more locally, and include a pinch of older employees leaving for retirement, and Gentry had a challenging recipe to contend with.

In the mid-2000s Gentry was able to purchase a rental home to house her J1 student employees. But much has changed since 2006, and as Gentry recently looked to purchase employee rental housing during the pandemic, her bids were outmatched or, in one case, quickly beat out by a cash offer. Meanwhile, employee shortages continued as more and more customers continued to flow through the automatic sliding doors. More employees were needed, and fast. But with affordable housing lacking in Ennis, potential hires were declining job offers as they realized they’d have nowhere to rest their heads.

Gentry realized it was time to not only secure a housing option for her team, but to also expand her business, meaning, even more employees would be needed.

Even before the pandemic, plans were underway to expand the store. Madison Foods, like other markets around the country, saw sales skyrocket as Covid took hold, rising 20% in 2020 and surpassing the income predicted for three years into the future.

Recognizing an expansion during a pandemic may not be a good move, Gentry put the brakes on the project for a while. Then building costs went through the roof while availability of skilled construction workers plummeted, extending the expansion delay even further.

She had no expectations that 2021 would beat out 2020’s sales, but they have, and she doesn’t expect a slowdown anytime soon. With commercial lots lacking right alongside the housing shortage, Gentry was in a bit of a pickle. The solution, however, was just around the corner.

In September Madison Foods purchased the lot between the market and Sportsman’s Lodge. The purchase will allow for the store to be expanded to the south. It also opens 11 newly remodeled housing units being offered for rent via Madison Valley Property Management, to both Gentry’s employees and the community at large.

Housing? Check. Expansion? Now in the works once again. Gentry said the plan is to break ground in the spring for the addition which will more than double the store’s square footage from 13,000 to 30,000. The extra space will allow for more product variety, a larger produce section, deli, bakery and more.

“It was just a win-win that the lot and units happen to be there,” said Gentry.

Ennis Mayor and Madison Foods Manager Blake Leavitt said the need for affordable housing, and workforce housing in general, is a topic being addressed as part of the Ennis Master Plan.

“Everyone’s talking about housing,” said Leavitt regarding input received from the community for the plan, “It was one of our big pushes.”

The creation of a roadmap for the community, “Envision Ennis,” is being done by Cushing Terrell of Bozeman. The process started in the spring of 2021, and a draft master plan is being unveiled on Wednesday, Oct. 13 from 6 p.m. to 7:30 p.m. at the Madison Valley Public Library.

Visit https://cushingterrell. com/envisionennis/ to learn more about the plan including community survey results and a recap of July’s virtual meeting.