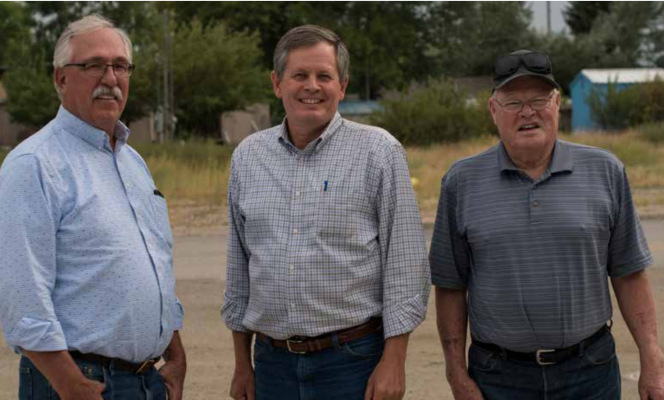 Daines was on his fifth 56-county tour, which he does every other year. He met with Madison County Commissioners Jim Hart and Ron Nye at the Twin Bridges Community Building. According to Daines, the LWCF, Land and Water Conservation Fund, has contributed to 17 projects in Madison County and it can provide more.

“You know as county commissioners, it’s hard to get two nickels sometimes to help do some of these projects and this is what it’s for,” Daines said.

Both of Montana’s United State Senators cosponsored the Great American Outdoors Act Aug. 4. The act permanently funds the LWCF $900 million a year. Energy companies drilling for oil and gas on the Outer Continental Shelf are required to pay royalties, which fund the LWCF. The $900 million each year must be spent on protecting natural areas, water resources, cultural heritage, and provide matching grants for state and local parks and recreation projects.

Most of Madison County’s economy is directly linked to recreation, agriculture or the natural environment. The LWCF is a tool for local governments to use to fund township recreation too. It had helped fund projects like Sheridan’s tennis courts, city park and city pool additions. Virginia City’s and Ennis’ community parks were completed with the help of the LWCF. The Varney and McAtee Bridge also qualified to receive funding from the LWCF.

“It’s one of the most understated and not very well understood conservation programs that benefits the people of Montana in a way that we need to continue to talk about,” Daines said.