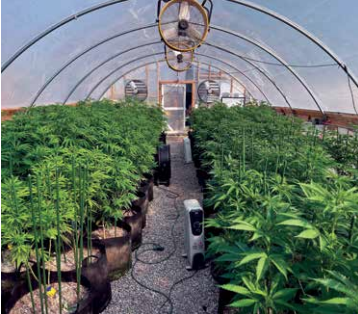 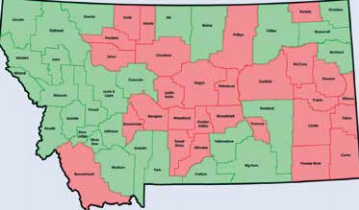 Madison County Commissioners have been learning a lot about the now legalized marijuana industry in the county. Their interest stems in part from concerns expressed by Shining Mountains residents who have grown weary of a medicinal marijuana grow operation in their neighborhood.

As Commissioner Dan Allhands explained at the Sept. 7 commission meeting, Madison County is considered a “green” county, in reference to its population voting in 2020 in favor of legalizing adult recreational use of marijuana. Counties whose majority voted against the measure are considered “red,” and adult marijuana sales will remain prohibited in those locations.

After speaking with an attorney familiar with the new rules regarding the legal use and related cultivation of marijuana, Allhands provided some information to Shining Mountains residents whose concerns allege light pollution, water overuse and even cartel connections, as well as threatened violence from the owner of the property which houses a greenhouse where medical marijuana is being grown.

That operation is Canna Connection Montana, officially registered in Bozeman according to the Montana Department of Revenue’s Cannabis Control Division. It’s owned by Mike Smith, who did not attend the commission meeting.

In rebuttal to claims of possible drug ring connections Smith stated he’s been in the marijuana business for 15 years and while his business is a family one, he has never had any connection to nefarious crime organizations. He doesn’t own any medical marijuana licenses, but rather, he owns a management company that assists people that do have a license manage their growth operations.

Smith also rebuts that some residents of the Shining Mountains neighborhood also maintain businesses of their own, such as vacation rentals, in the neighborhood, and that he has also been the recipient of threats of violence and a lack of law enforcement response. He also maintains that he no longer uses grow lights and stays within the limits of his water usage allotments.

Grievances aside, commission meeting attendees wanted to know what could be done to get the grow op out of their neighborhood. Madison County, as Allhands and meeting attendees understood it, would have the authority to opt out of allowing marijuana sales via a county-sponsored special election. The hour-long discussion highlighted the many unknowns and unexpected outcomes resulting from the legalization of marijuana. In Nov. 2020 57% of Montana residents passed Initiative 190 which legalized adult use of recreational marijuana. In Madison County 52% of voters approved the measure – a difference of just 267 votes. Since Jan. 2021 Montana residents can legally grow and consume marijuana, but will not be able to purchase it at a store until Jan. 2022.

In addition to his outdoor and greenhouse operations Smith also facilitates marijuana cultivation in a warehouse near the fire department in Ennis. He said once marijuana becomes legal for all adults, he plans to open a number of Canna Connect stores in the state, with Ennis as the base of operations. Rather than obtain a license of his own he’ll continue to operate in a management and consultant capacity for licensed cannabis growers. He said he expects to employ up to 30 people in Madison County with wages of $20 or more.

As the agenda item concluded commissioners stated they’d do more research into what is and isn’t allowed regarding marijuana cultivation facilities within the county as well as what powers and responsibilities the county has regarding a potential opt-out election.