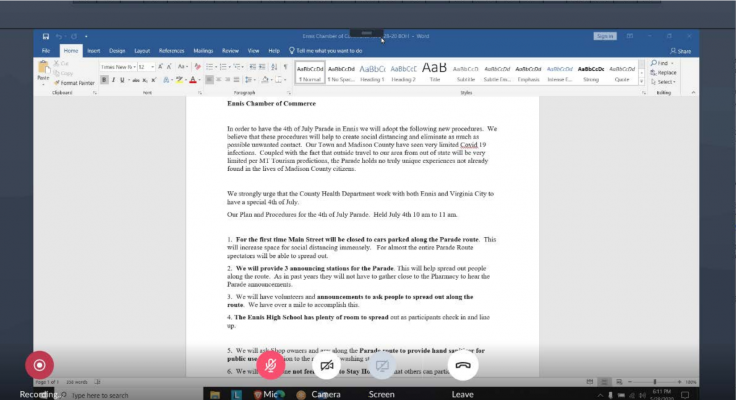 Private and public events over 50 people in the county will have to go through the Madison County Public Health Department, but expectations are unclear.

The governor’s directive specified that “groups larger than 50 people should be canceled unless physical distance can be maintained.” Local public health departments will make the decision. One event dominated the conversation, Ennis’ Fourth of July Parade.

“My job is to review the plan,” Brummel said. “The Public Health Department will not come up with a plan.”

The Ennis Chamber of Commerce [ECC] submitted a broad outline of their plans for a Fourth of July Parade in the MCPHD meeting May 28. It was the first time most members of the MCPHB and the ECC were seeing the document. Plans included efforts to spread out spectators, such as removing cars from Main Street, having three separate announcing stations and using volunteers and announcements to ask people to spread out along the route. Handwashing and sanitizing opportunities will be implemented with the help of businesses along the parade route.

Main street businesses expressed concerns for both outcomes. The Fourth of July is a significant economic driver for Ennis. Amy Kelley, owner of the Gravel Bar, understands the financial gains of the Fourth of July weekend in Ennis.

“In three days, we earn more than three months in the winter,” Kelly said.

But Kelley, like some other main street businesses, is concerned with Ennis’ ability to enforce physical distancing and safely have a parade. Individual responsibility remains the most important factor in mitigating the spread of COVID-19, which is a concern for some and a reassurance to others.

The ECC plans to provide the opportunity for physical distancing but does not have plans to enforce it. The planned regulators are volunteers for the parade and individuals taking responsibility.

“There is no way to prosecute people for not adhering to social distancing,” Madison County Sheriff Phil Fortner said. “And I worry about people telling other people what to do.”

Other main street businesses owners, like Plain Janes and Average Joes owner Cindy McKitrick, said that she believed the community can maintain the safety measures required to conduct an event over 50 people.

“We just need to give people a little more credit,” McKitrick said. “I think you’re going to be shocked that if we do have this parade that people will automatically socially distance themselves at that parade. People are going to police themselves and we shouldn’t have to tell people to be 6 feet apart.”

The ECC is continuing plans for the parade but will abide to any decision that the MCPHB makes and the Town of Ennis makes on June 11. The Lions Club lunch and the Madison Valley Fire Department pancake breakfast have both been canceled. According to Bettendorf, those cancelations make sense, but the Fourth of July Parade has more of an ability to be creative and room for physical distancing.

“If there is no one to enforce social distancing for events over 50 people, then how can we approve something like that?” MCPHB member Dayna Thergensen asked.