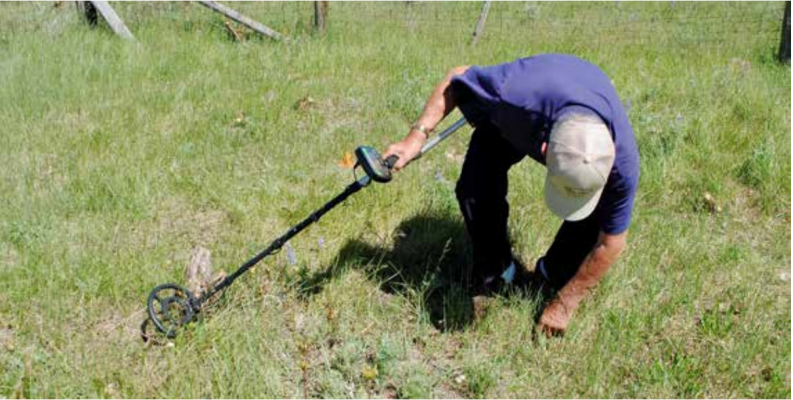 A family story, a history lesson and extra time

Forty miles from Alder, past Upper Canyon Outfitters on the right side of the road near Poison Creek, sits a fenced in portion of grass.

The Forest Service put up these fences to compare the amount of grass outside the fence to the inside to get an idea of how much grass was there before grazing, Bill Tate, second-generation Montanan in a family that extends five-generations deep, said.

“Everyone assumed this was one of those,” he said. The tale passed down through his family described something different.

“The story is they are U.S. Calvary soldiers who are buried there,” Tate said.

The Battle of Camas Meadows fell amidst the five-month Nez Perce War in 1877. After sustaining significant causalities during the Battle of the Big Hole, the Nez Perce began to travel southwest through Montana, according to the National Parks Service (NPS).

They traveled circuitously to throw off U.S. troops, going south from the Big Hole, into Idaho, over Bannock Pass then east to Yellowstone National Park (YNP). U.S. Army General Oliver Howard planned to cut across southern Montana to intersect the Nez Perce’s route near YNP.

General Howard was under pressure to defeat the Nez Perce. The war—beginning in June— had already lasted two months, and the expectation going in was that it would be quick.

Approximately 45 volunteers from Virginia City rode to William’s Junction from Puller Hot Springs on Aug. 16 to meet with General Howard and offer their services.

On Aug. 19, 1877, General Howard, his troops and the volunteers made it to Camas Meadows, located near Kilgore, Idaho. Camp was made in open space and the horses were let out to graze. Nez Perce scouts located the troops, but both parties knew of the other’s presence. There was little fear of being attacked that evening and the troops let down their guard.

“But…the wisest calculations often go amiss, and it was destined to be so in this instance,” a Madisonian archive from Aug. 25, 1877 read.

Early the next morning, the Nez Perce cut the U.S. Calvary’s horses loose and barraged the camp with steady fire.

The Nez Perce took advantage of the early morning hour, the relaxed nature of the camp and the open meadow setting. They accomplished their goal of forcing the army on their feet, setting 200 horses and mules free, and continued east towards Yellowstone. General Howard and his troops walked back to Virginia City to get more horses and tend to their injured. Five wounded were brought to Virginia City.

Tate figured they would have made it back around the 23rd or 24th of August. The discrepancy in his family story is that his relatives thought those buried near Poison Creek were U.S. Calvary soldiers, but Tate reckoned they may be the volunteers.

“By a badger hole, there was a person’s kneecap up on the surface,” Tate found while in the area one day. “The badger apparently dug up the kneecap.”

Tate used a metal detector and found three sets of four metal stakes in the fenced in area. They were arranged rectangularly and the spacing led Tate to think three people may be buried there.

“We don’t know how to tie it all together,” he said.

According to The Madisonian’s archives, three dead from the Battle of Camas Meadows were named. Bugler Bernard Brooks was killed at Camas Meadows, Private Harry Trevor was buried in a Virginia City cemetery and blacksmith Samuel Glass died in Pleasant Valley.

Burial practices changed after the Civil War due to the unprecedented amount of death. Before, burying the dead was the responsibility of the Army’s Office of the Quartermaster General, according to NPS. In 1861, the responsibility shifted to the Union Commanding Officer.

Land was purchased for Union cemeteries in 1862 but Confederate soldiers were not offered any burial benefits. When the reburial corps came around, Confederate dead were often left lying on the battlefields, NPS explained.

On Oct. 3, the Sheridan American Legion Post 89 refenced the site near Poison Creek. Michael Morgan, adjutant for the post, said the goal was to get a plaque set up that tells the story. Morgan was also trying to figure out who was buried at the Poison Creek site and was working on looking into military archives before the refencing. Many of the places he planned on visiting for research were closed due to coronavirus precautions.

“We are still working on identifying who is buried in the cemetery and would like to hear from anyone in the community who may have information on this site,” Morgan said.

The Sheridan American Legion Post refenced the area, without knowing for sure if soldiers were buried below, out of a respect for veterans in general and history at large. “We’ve got a little more time to give back to the community, I guess you’d say,” Brian Rumsey, Pony VFW Post 3831 member, said.

Tate has placed American flags on the rickety fence near Poison Creek every Memorial Day for the past five or six years. It was something he had time for and cared about. “Young people… you’re busy every day,” he said.

“We have a hard time attracting the younger members. They’ve got other things going. They’ve got families to raise and they’re going to school, and they’ve got jobs and things and life gets in their way,” Rumsey said.

According to an American Association of Retired Persons (AARP) report from 2016, Veterans of Foreign Wars (VFW) posts nationwide have lost a third of their members over the past 20 years. The average age is 67 and more than 400,000 are 80 and older.

The Ennis VFW sent in their charter last year as it did not have enough active members to operate. Some die, some move away, and some are remote members but not very hands-on, Rumsey said.

“We all want to keep our posts going, but it’s kind of like that song, where have all the flowers gone?” Cynthia Rumsey, Brian’s wife, said. The Pony post started in 1969 and struggles to get the five-person quorum for a meeting.

AARP cites some of this decline to less people fighting in wars and younger veterans not finding a hook within the VFW community. Some VFWs have tried to switch to a more modern appeal, building playgrounds or moving headquarters to a more central location.

While acknowledging decreased membership, Tate and local VFW groups and legions understand that young people do not always have the time to place American flags on veterans’ graves.

“After you get up to 55 or 60, you’ve got some time to do things, and you care about doing those things,” Tate said.