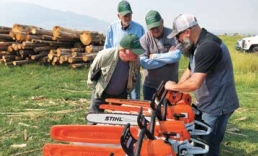 Hear the buzz? A heart and hearth-warming story

Can you hear the buzz? The familiar buzz of chainsaws at work is often evident just south of Sheridan as the Firewood Bank of Ruby Valley volunteers prepare to keep hearths in need in fuel.

This week, Ennis True Value and Stihl sent some helping hands to the “Wood Bank’s” helping hands. Danny Lamb, a representative from Stihl, a german manufacturer of chainsaws and other handheld power equipment including trimmers and blowers, and Cody Bittick of Ennis True Value traveled to the Ruby to “show them new tools, new techniques and new safety measures, “ according to Wood Bank financial director, Frank Ford. The duo spent time discussing maintenance and other tricks of the trade with the volunteers. After discussion and the sharing of chainsaw knowledge, the group shared lunch.

“They did a great job for us, we appreciate the time they gave us,” said Ford.

The Wood Bank has been helping meet the heat needs of the community since 1994 when it was formulated by Fr. Harry Neeley and his wife, Val, as part of the parish ministry of St. James episcopal Church of Dillon. The group was initially known as the Tri-County Wood Bank and served Beaverhead, Madison and Silverbow counties. Today, The Ruby Valley Wood Bank serves approximately 25-30 families. While the organization has changed over the years, the mission has remained the same, “The volunteer members cut, split and store firewood while awaiting to deliver it to those in need.”

When asked how he got involved, Ford responded, “Harry grabbed me by the neck and said, ‘get to work’ and I’ve never regretted it.” “Harry is a hero,” commented another, he helped at the wood bank until he was 85.

Last year, the Ruby Valley community rose to the challenge and demonstrated amazing generosity after the Wood Bank lost many of their tools to a senseless breakin. Community members and businesses alike helped refill the coffers and replace missing tools after the crime.

“The average age of the active volunteers is in their 70s, with at least three octogenarians in their number.” They are quick to point out that they’d be happy to accept some young blood into their ranks. Interested volunteers may contact one of the RVWB Directors: Donald Snyder, Frank Ford or Tom Roberts for more information.