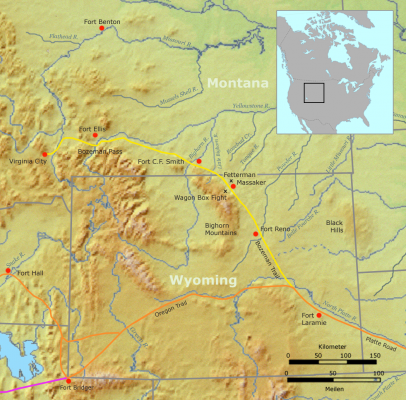 Most people who have awareness of early Montana history have some knowledge of John Bozeman and the Bozeman Trail. The Bozeman Trail was an overland route through Wyoming and Montana, connecting the gold rush territory of southern Montana to the oregon trail in eastern Wyoming. It’s most important period for pioneers was from 1864–68, and the trail and a critical pass came to be named after the colorful John Bozeman who--with great assistance from John Jacobs--originally platted what was initially known as the Bozeman-Jacobs Cut-off.

Many people don’t realize that the end of the Bozeman Trail was not the town of Bozeman, but Virginia City. In late May 1863, a prodigious new gold deposit was found at Alder Gulch; about 75 miles east of the earlier strike at Bannack. Word spread fast and the miners left Bannack and rushed to the new diggings. Soon the hillsides along Alder Gulch were covered with miners’ tents, brush shelters and crude log cabins. and when it came time to christen the epicenter of the new mining district, the official document was abruptly amended from “Varina” (the wife of Jefferson Davis) to Virginia City.

The first attempt by Bozeman and Jacobs to guide a train of wagons across their new trail in the Summer of 1863, ended well short of the intended destination; Bannack. Near present-day Buffalo, Wyo., the train was met by 150 Sioux
and Cheyenne warriors who advised there would be serious consequences to continue—the pilgrims wisely turned around. While Jacobs led the wagons back to the Oregon Trail, Bozeman dared to ride on and was joined by nine men on good horses. After 21 days, traveling mostly at night, they safely reached the Gallatin Valley by way of what is now known as Bozeman Pass, between present Livingston and Bozeman. The men continued to Three Forks where they met a party of men who told of a fabulous new gold discovery at a place known as Alder Gulch. Bozeman quickly changed his destination and the course of “his” trail and they arrived in August of 1863.

Returning to Wyoming in the Spring of 1864, Bozeman organized another pioneer group headed to Virginia City by his new shorter route. After a three to four month journey, the early Bozeman Trail pioneers who arrived in Virginia City spread out among the nine mining camps along Alder Creek. The new arrivals (reportedly 200- 300 daily during the summer of 1864) represented several states and countries. John Bozeman would lead his second—and last—wagon train (of approximately 150 wagons) in the Spring/Summer of 1864, arriving on August 1st of that year. One of the many families on the Bozeman Trail in 1864 was the Canary family, including their 12 year-old daughter, Martha Jane, who used the travel time to improve her marksmanship and riding skills. For all their cultural differences, most of the thousands of those who traveled the bozeman trail arrived in Montana with the great hopefulness of wealth and peace in beautiful new cities among the mountains...most would be disappointed.

The thousands of miners soon exhausted the gold in Alder Gulch using the tools and methods they had available. By 1870, Virginia City was a shadow of its former self with a population of only of 867. The Bozeman Trail had been officially closed, John Bozeman had been killed a few yards from his namesake trail, and Martha Canary had left Montana and become widely known as “Calamity Jane.” Nevertheless, Virginia City was still the territorial capital and the government land office map shows many of the streets which exist today, including a road in the 1870 government survey map called the “road to Sterling” leaving Virginia City to the north-east. Sterling was
a mining area three miles west of Norris. The road traveled through the Tobacco Root Mountains, exiting in the Madison Valley and connecting with the road to Gallatin (Bozeman).

An early pioneer VCPA will be remembering was Sam Word. Word was a young attorney and diarist who was part of the 1863 wagon train lead by Bozeman and Jacobs that was turned back half of the way to the Yellowstone river by the Cheyenne. Word followed the Oregon Trail to Salt Lake City and Fort Hall arriving in Virginia City in September 1863. Word kept an extensive diary and based on Word’s diary, his ‘ghost’- portrayed by a VCPA member - will join us and tell the story of his experi- ence on the Bozeman Trail and later life in Virginia City and later Helena.

Join the Virginia City Preservation Alliance (VCPA) in celebrating the arrival of the first pioneers on the Bozeman Trail! The organization will be hosting a full day of events on Saturday, July 23 to support preservation efforts in Virginia City and the greater Alder Gulch area. The day begins with a guided hike up the Bozeman Trail where participants will learn the history of the trail and hear accounts of those who ventured westward seeking their riches. Following the hike trek down to Depot Park for the Kid’s Hot Dog Roast (adults welcome too!). Entertainment fills the afternoon and evening beginning at 1 p.m. with the Dillion Junior Fiddlers. The Ghost of Samuel Word will be portrayed by longtime resident and VCPA board member Larry Leonard based on the diary of a prominent man who traveled the Bozeman Trail in 1863.

Country western singer, song- writer, guitar picking cowboy Colt Angel is up next followed by a reading from the Girl from the Gulches: The Story of Mary Ronan, a detailed memoir of a young girl growing up on
the Montana mining frontier written by Ellen Baumler. At 5 p.m. T.J. Casey, “Montana’s singing cowboy” takes the stage with his “vivid tales, wisdom and gut-busting humor.” Ennis’ own ‘Lil Hogpit' will be serving up a cowboy BBQ with pulled pork, pulled chicken and all the fixings. During the music finale, The Cowboy Jamfest, treat yourself to a selection from the VCPA hosted Cobbler Bake Sale. Top it with ice cream to make the day complete! Visit www.virginiacitypreservationalliance.com for tickets and more information.