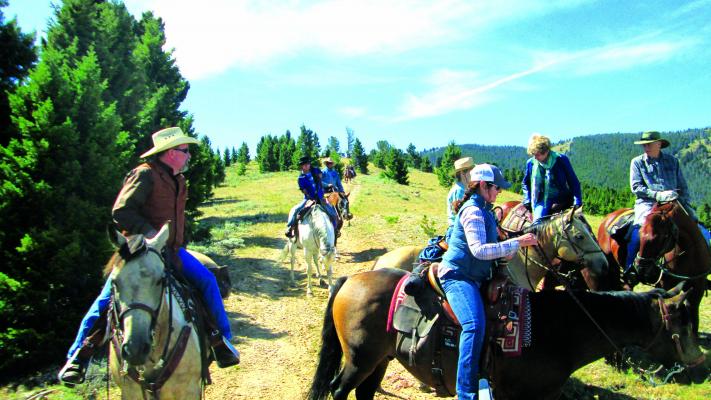 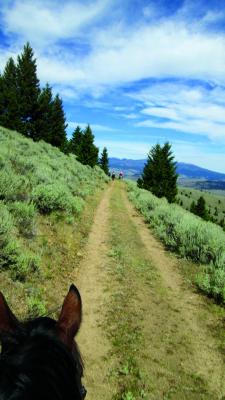 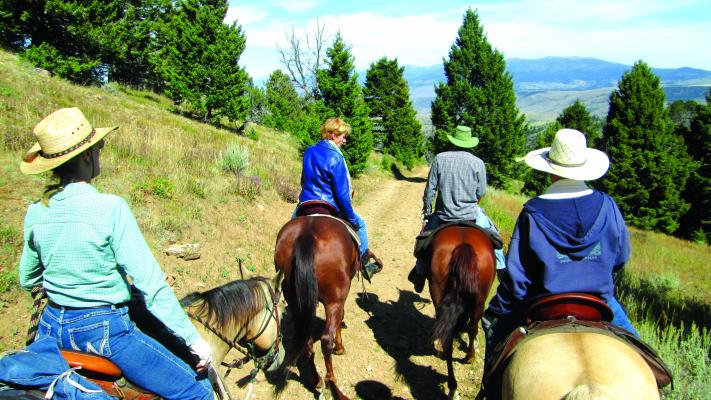 VIRGINIA CITY – The 1968 western, “Five Card Stud,” with crooner Dean Martin and the legendary Robert Mitchum, was a story about vengeance – about Van Morgan, Martin’s character, wanting revenge on the people who lynched his father, who allegedly cheated at a poker game in a saloon and was hung for it. He didn’t, and Martin winds up getting Western justice on everyone at the table that night.

On Saturday, Sept. 1, five-card stud – no draws, no jokers or one-eyed jacks wild – was also the name of the game for the town Chamber of Commerce’s annual Poker Ride.

The ride was a horseback event that, according to Mark and Jean Savinski, who were manning the registration table, drew more than 70 riders to compete in the event. This figure was down slightly from 2017’s event, which hosted more than 80 riders, probably because a lot of competing activities were taking place.

The Bale of Hay Saloon, with its “Nymphs and Satyr” painting, was the starting point for the 11-mile, four and a half hour ride.

For $20, riders received a hand, a paper with five slots to fill in when they drew a card from a deck – Ace of Spades, King of Diamonds, Queen of Hearts, 10 of Clubs, etc. The riders pulled the first card at the Bale of Hay registration table, had this marked on their paper hands, then they rode to the three other stations, manned by patient volunteers along the trail, to pull a card from a deck and mark these cards down.

Whoever got the best poker hand – three of a kind, a pair of Aces, a straight, etc. – won. Winners of the best hand, second best, third best, would receive nice prizes: First prize, for example, included a fine leather headstall. Also, there were door prizes.

But the real prize wasn’t the plunder of winnings, it was the scenery and the camaraderie: Horse people are just great people to hang out with. And the 11-mile trail included a trot up Alder Gulch Road, to the first card-pulling slot, then up into Hungry Horse Hollow, then climbing to “the top of the world, no finer view around,” as McAllister rider Ann White, who was working her new buckskin quarter horse that day, said riding the ridge towards the radio towers above Virginia City.

And she was spot on. No less than eight mountain ranges were visible from the ridge. The beautiful Ruby Valley lay below. And these things, coupled with a bright blue sky, cool temperatures, and a good group of people to ride with made the long ride a real joy.

Bev and Melanie Hoffmann and Greg Schwab agreed. Bev Hoffman and Schwab had traveled all the way from New Ulm, Minnesota, to participate in the ride.

They were visiting daughter Melanie, who lives in Three Forks, and Melanie arranged for them to participate in the ride in 2017. They returned this year.

“This is the best poker ride we’ve ever been on, “ said Bev, who took a second place prize home last Labor Day. “This has all of it.”

Melanie said her husband was babysitting their young son, so she could enjoy the ride with her mother and step-dad.

Schwab explained that their original plans had included bringing some friends from South Dakota along for the ride, but they had to cancel at the last minute. They’d visited Medora, in North Dakota, then went horseback riding in the Theodore Roosevelt National Park and the Little Missouri National Grasslands in North Dakota.

Following the ride, a bountiful and delicious lunch was served to riders at the Bale of Hay, and their cards were called, hands on the table. One woman was heard to say she’d drawn four kings.

Still, every rider was a winner.