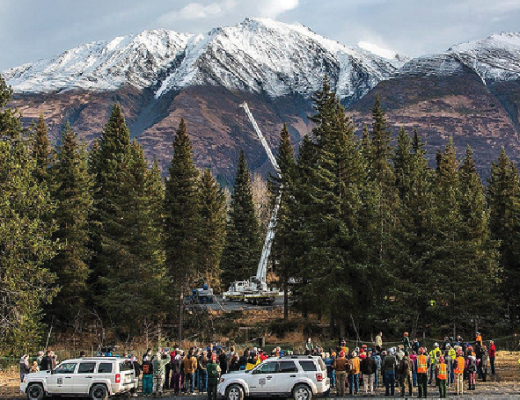 Christmas Trees at the White House have a lengthy history that has changed with the times. Currently, a rotation of states supplies the annual tree, and one year a former Alder resident chopped down the tree meant for the Capitol Building.

The tradition of designating trees for the White House Lighting Ceremony dates back to 1923 and President Calvin Coolidge. A 48-foot fir tree was adorned with 2,500 red, white and green lights and lit as a local choir sang and a Marine Band played. Through war and peace, this tradition endured.

According to the National Christmas Tree Lighting website, President Franklin Delano Roosevelt never missed giving a Christmas Eve message through radio waves. In 1934, one of his presidential years, two Fraiser Fir trees were planted on opposite sides of the Jackson Statue to serve as National Christmas Trees in alternating years. They prospered until 1978.

For four years as World War II dragged on, the National Christmas Tree did not illuminate the White House lawns. In 1945 as the war ended, it was finally relit. “This is the Christmas that a war-weary world has prayed for through the long and awful years. With peace come joy and gladness. The gloom of the war years faded as once more we light the National Community Christmas Tree,” President Harry Truman said.

As with most traditions, the passing of time led to more grandeur. In 1954, the singular lighting day stretched into a three-week celebration. A ‘Pathway of Peace’ was constructed and lined with trees from all states, territories and the District of Colombia. The trees themselves transformed with the times as children started to help with the lighting process and energy efficient measures were incorporated in 2007.

Montana trees had moments in the spotlight, first in 1958 during the Cold War, again in 1989 as the Berlin Wall fell and later in 2017. The 1989 tree from the Bitterroot Forest was the tallest at that point at 78 feet and paraded through Montana before leaving for DC. “This tall tree stands as a tall symbol of freedom, democracy and peace,” Sen. Max Baucus said at the lighting.

While the 2015 tree did not come from Montana, it had roots in Alder. Ed and Judi Osborn live in Alder and have two sons, Jon who lives in Virginia City and serves on the city council and Dan who currently lives in Alaska.

Dan went to elementary school in Alder and high school in Sheridan before attending the University of Montana in Missoula. He worked with the Madison Ranger District in Ennis his first year out of high school, preluding his career in fire management. Now, working with the Seward Ranger District in Alaska, he conducts chainsaw classes as a component of his job and, as his father put it, was one of the better sawmen on the team.

“It was kind of a feather in his cap, so to speak,” Ed Osborn said. Dan was given the honor of cutting down the 2015 National Christmas Tree from the Chugach Forest. This varietal of spruce tree was native to south-central Alaska and only grew in that part of the state. It was displayed at the Capitol Building and decorated to commemorate the National Parks Service centennial.

“We watched him on TV cut the tree down,” Ed said. Ed and Judi were able to see the tree in Bozeman before it was transported to DC. This was the first time a tree had come from the noncontiguous United States and also the first time a barge was necessary for transport.

“It was fun to watch on the news when you knew it was his tree,” Mary Jo Smail, Alder resident, said.