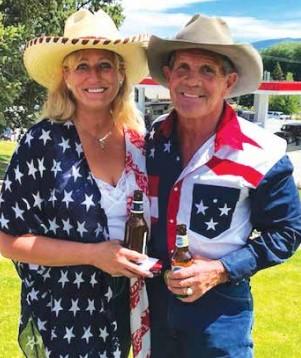 Then, He Was Named Grand Marshal!

Dr. Robert Marks has only lived in Ennis for thirteen years but based on the impact he has left on its hospital, patients, and community, the honor of Grand Marshal could have come a long time ago. When given the news Marks joked “I didn’t think I was old enough, the miles must count.”

Originally from Clancy, Montana, Dr. Marks recalls his first visit to Ennis at the ripe old age of five. He came with his father, a rancher, to attend a bull sale. Specifically, however, he remembers the BBQ beef sandwich he ate that day. It was made by Betty Goggins and he grinned ear to ear as he talked about it; now that is a memorable sandwich! Some time after that phenomenal meal Marks attended high school in Boulder then joined the Marines and served in Vietnam. Marks then obtained his degree in biology, with a business minor, at Carroll College and planned on going back to the ranch.

Then, a classmate asked Marks if he was going to medical school, assuming that was the case as he had such high grades. “I thought, well, why not just take the entrance exams (MCATs), no stress, just see what happens… and I smoked ‘em!” he declared, “That was the first multiple-choice test I ever did well at!” This fortuitous suggestion and success led him away from the ranch to the University of Washington Medical School.

Dr. Marks opened a family practice in Missoula where he said he “delivered lots of babies” and then he joined a multi-specialty group, where he remained until 2007. By that point stress was setting in and he decided it was time to go back to ranching.

Then, a friend asked if he had ever thought about working in the Middle East. He had not, but there was a sports medicine hospital opening in the country of Qatar, and he had just the experience they needed to help get it off the ground. Dr. Marks lived in Qatar for two years where he worked with nurses from twenty-six different countries. His ‘ask for forgiveness instead of permission’ style and hard work brought the hospital world class status. Another adventure and success under his belt, Marks came home to settle back into that ranch.

Then, Mark’s father, who was with the Madison Valley Bank, suggested he join the Ennis hospital, which he knew to be struggling at the time. “You’re breaking too much equipment [on the ranch] anyway!” his father told him.

Dr. Marks, with his experience in the medical and business fields, came to the Madison Valley Medical Center. Marks' humble dedication and out of the box thinking was a great fit and the hospital was well on its way to becoming what it is today. “I take a lot of blame for that”, he said, “but I don’t deserve the credit. It was a perfect storm that made it happen.” The right doctors were available and the “finance guy” he brought in was a perfect fit. “The staff had been there a long time too. Like Joan Goetz and Jodi Sprout… they stuck with it through the hard times,” he praised. Dr. Marks also gave credit to the board and the community.

Marks’ professional life is not the only thing that ignites his passion. He loves the outdoors, and he loves his mules. He spoke fondly of the many years he has spent with his animals and the many travels they went on together. One mule in particular, General Jackson, seemed to have a special place in his heart. I sensed a crack in his otherwise upbeat persona when he mentioned that mule had passed. Dr. Marks has had a long-standing tradition of driving his mules in the Independence Day parade, so it is likely you know how proud he is of them, and you likely got a glimpse of General Jackson himself.

Andi Marks, Robert’s wife, shares in his love of the outdoors and of ‘the red, white and blue’. This year’s holiday has special meaning for the couple as Andi, originally from Canada, will become a citizen of The United States.

As my conversation with Dr. Robert Marks, 2022 Grand Marshall, came to a close I remarked on how well things had fallen into place for him in life, and particularly in Ennis. He responded with a list of people and opportunities to be grateful for, outstretched his arms, looked around and declared “Then, I get to live here!”