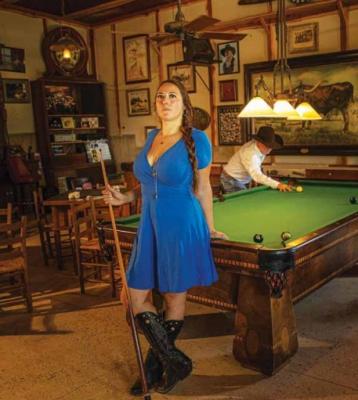 Back to her Pony roots

Tessy Lou Williams first performed at the Pony Bar at age 19 and then she moved to Austin to chase a career in music. Three records and a wealth of touring experience later, she returned to Pony, Montana, and now she even calls the once booming gold-mining destination home.

“Yes, I was born here,” says Tessy Lou, “but every day, I find something that takes my breath away about Montana, and there’s nothing more inspiring than that.”

Indeed, Tessy Lou’s Tobacco Mountain roots are fixed deeply in the southwest town of 100 residents. Her father, Kenny Williams, and her mother, Claudia, moved to Willow Creek from Nashville in the 1980s, forming a band called Montana Rose. For a number of years they serenaded the Pony Bar, and it became an extension of their operations, and perhaps not surprisingly, it also served as a key part of Tessy Lou’s upbringing – both creative and social. In due course, it would become the spot where she launched her stage career, rising above a “paralyzing” sense of performance anxiety amid a throng of familiar faces.

“At one point early in my career, I was playing at the Pony Bar on Sundays for about two years straight.”

When Tessy Lou returned to Pony in the summer of 2020 – her parents still reside there, too – she at first planned to spend just a few weeks, but as the COVID-19 pandemic carried on, her decision not to return to Texas but to remain in Montana seemed the best option. The longer she stayed, the more sensible it seemed to her to stick around “permanently,” she says.

“In November 2020, I moved my belongings,” says Tessy Lou, who is also employed at a boot maker’s shop in Harrison. “It was my first Montana winter in eleven years and I enjoyed it, and it was a pretty mild winter. Pony is a good spot: close enough to everything and not in the thick of it. It’s a community, and it’s quiet and peaceful, and it’s beautiful.”

The building that houses the Pony Bar was built in 1877 and became a bar in the early 1930s; it’s a community-gathering ground abounding with so many melodic memories for two-generations of the Williams’s.

“I was fully comfortable starting out on those Sundays at the Pony Bar, and getting used to the performance aspects of music,” says Tessy Lou. “I knew everyone in the crowd, and it was very exciting as the crowds began to grow. I could ease myself into that world. I had about 30, 40 songs of my own and I played some Montana Rose songs (her parents’ recordings) that were some of my favorites growing up.”

Tessy Lou was exposed to scores of different genres of music throughout her childhood; while she sounds cozy on two-stepping country or slowly waltzing honky-tonk playlists, her appreciation of music stretches much wider. Her mom’s favorite musician was jazz star Ella Fitzgerald and her father worshipped rock n’ roll sensation Elvis Presley. The most pervasive elements of her childhood memories revolve around the inevitable vagaries of music: rehearsing, touring, traveling, anticipating, and performing. When Montana Rose toured, Tessy Lou and her siblings frequently accompanied their parents to motels and festivals.

“We’d always have a hotel room, sometimes with a TV with a VHS attachment. They (her parents) would check in on the three of us kids while on breaks and send friends up to keep an eye on us. At Chico Hot Springs, we roamed that place a bunch. If it was more like an art festival setting, we’d set up the merchandise table and watch the crowd dance to my parents playing.”

After gaining confidence at The Pony Bar, Tessy Lou branched out at different venues in Montana, primarily within and near the Gallatin Valley, such as Buck’s T-4 Lodge in Big Sky and the Corral Bar in Gallatin Gateway. While the local scene provided an inestimable boost, Kenny Williams was adamant that, if Tessy Lou wanted to successfully establish a career in music, then she must set up camp in either Nashville or Austin. Tessy Lou selected the latter, and in November 2010, Kenny accompanied Tessy Lou south on a long, necessary trip to Texas. At age 20, Tessy Lou was blessed with the invincibility of youth, buzzed by the pleasure of embarking, and an idea (that she could be her own act) grew into a realization, and then solidified into a resolve.

“Eventually, I moved to Austin, and we played every Sunday at Poodies Hilltop Roadhouse (in Spicewood, Texas), a place opened by Willie Nelson’s stage manager. Poodies was exciting and terrifying for me. In Montana, I was the Montana Rose kid and people had expectations and connections, but I wanted to strike out on my own. There was the unknown in Texas, and the unknown allowed me to create my own existence.”

Keen to spin her own variation of country culture, Tessy Lou is committed to honing the swooning magnetism of her vocals and the catchy grooves purely delivered by her and her bandmates, the Shotgun Stars. (Tessy Lou has released two recordings with the country band and a solo album.)

The desire to be a musician was an irresistible tug, and that desire has now been replaced with a soothing internal humming, a conscious sense of self-satisfaction and purpose.

“My first trip back to Montana after we released our first album (“Leaving Montana”) we were playing in West Yellowstone and playing songs from “Leaving Montana,” and there was a crowd of people singing along, and it was a huge confidence booster. Not only did they know music, but it struck enough of a chord in them for them to know the words…It feels good to make people feel something. That’s why we are here.”

Williams’s solo album, a self-titled collection of original compositions written and recorded in Nashville, was released on May 17, 2020 to a stream of favorable reviews, and though she wasn’t able to execute a tour after its release, she is grateful that she was able to put forward such well-produced country music.

“Each person who I wrote a song with did their own harmony vocals, and that was special to me to keep that theme throughout the album. I brought dad in on the album and he did harmonies. Their playing helped and pushed me to sing at my best, on a more personal level. It’s the best I have ever sung. My prime was inspired by the musicians and the songs.”

Sunday night sessions at Pony Bar Live streaming and virtual events condemned to the past, Williams says that she is buoyed by all of the aspects of live performance that can’t be simulated: the unique grace, elegance, spontaneity, and feedback, and the precious immediacy created and shared. She plans to generate a couple local tours this summer, including frequent

Sunday night sessions at the Pony Bar, and then formulate a new touring schedule come fall.

“The live stream was awkward because there was no interaction with the crowd,” says Williams. “You could go into your bedroom and sings your songs the best you’ve ever played them. But to make the crowd feel something is what the musician plays for. Music is the human-to-human reaction. It is such a special, powerful emotion on our end to play and such a beautiful thing for both the musician and the listener. People are regaining an appreciation on both sides. We didn’t have each other for a while.”