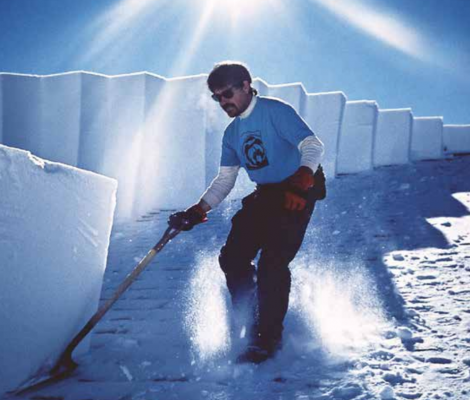 Tales from the tundra

For years men have harnessed the tools of the woods and tamed the onslaught of winter weather in a most inventive way. Their efforts have kept buildings standing in Yellowstone National Park (YNP) and allowed for people to better experience a largely untamed world. The passage of time in wild places like Yellowstone consistently reveals a harsh and beautiful truth: predictable unpredictability.

When Jeff Henry reflects on his 42 winters spent in the park, he waxes nostalgic and notes that his mind recalls details of winter weather with near-encyclopedic accuracy. Originally from Pennsylvania, his family moved around a good amount since his father was in the Air Force and then an executive for J.C. Penny.

Henry has seen it all – every kind of weather, nearly every kind of event, nearly every kind of person and has experienced ungodly temperature deviations. He quickly climbed the ladder, from a kitchen employee to a seasonal ranger and then to winter keeper. His stories are vast after over four decades on the tundra. The summer fires in 1988 decimated the park with flames. By fall, many employees sought escape to exotic locales and paved the way for Henry to further explore the place of his dreams.

“Park Service people worked tons of over-time…and people got burned out because of the fires, no pun intended,” he said. “A bunch of Yellowstone babies were born as a result of the lavish vacations they took.”

As a seasonal ranger at the time, he was asked to stay over the winter and tasked to snowmobile all the roads in his district twice a day – about two hundred miles of snowmobiling. A different world from anything he had ever known, it was exactly what he wanted. Things were a bit more relaxed in the early days of YNP. The millions of visitors per year had not yet hit.

With the swirling assortment of feelings that nature often creates, it was beautiful, blissful, thrilling and serene. He had company, too – a big German Shepherd search and rescue dog named Hoss – “a tough guy; a very macho dog”. Hoss found fame with more than a few mentions in the book, “Death in Yellowstone,” by retired YNP Historian Lee Whittlesey.

Henry would saddle up on the snowmobile and Hoss would clamor on and sit between his arms and legs. The duo would zoom around those hundreds of miles per day – traverse over 4,000 miles in four weeks. It was a sight to see – man and beast enjoying the thrill of wind and powder, but few people saw them. Winter visitors were virtually non-existent. A month went by and they did not see another human. Hoss loved it, but seating arrangements being what they were, he took the brunt of the wind. When the temperatures hit 30-40 below one day, the chilly force pushed his lips open – and his mouth froze. The big dog was humbled by the harshness of Yellowstone – and drooled for several weeks. Henry felt terrible guilt, but Hoss healed and the adventures continued.

Now with 41 years under his belt as winter keeper for Yellowstone General Stores, he tosses out trivia-like questions with ease, but in addition to the facts, he also has personal stories. How many times has the Yellowstone River flooded? Twice. He was there. The winter of 1996/1997 he was removing 12-foot-deep sheets of moisture saturated snow – heavy chunks that would have crippled and collapsed structures.

He creates a grid pattern on the snow-covered roofs and then sets to work with his saws and “arsenal of tools” he has accumulated over the years. He saws all 15 to 17 blocks, depending on the size of the roof, and only then does he pick up the shovel and skid the blocks off the incline. That process is simply more efficient with the repetitive, physically taxing work. Saving a couple of steps with each block adds up when faced with the massive undertaking.

There is no documentation, but he suspects that the initial winter keepers of 1881 had similar thoughts to cut squares of snow for removal. They were independent and clever, dependent on firewood for warmth and cooking. They had the saws and he believes they had the ingenuity, too. Regardless, the process he now uses is a time-honored tradition passed down from winter keepers for decades.

The work is a solid workout for legs, upper body and aerobically, he said. He also credits the winter work in Yellowstone for helping him keep in shape. He is feeling pretty good for 67 years old.

What he does now, and what he has done for over four decades has been a dream come true ever since witnessing the winter keepers working when he was a young buck, new on the scene in Yellowstone and working in the kitchen at the old, Old Faithful Ski Lodge.

“That was the first winter I saw people winter keeping, shoveling roofs and I thought it was the coolest thing I had ever saw. So, I did some work with those guys, made a pest of myself with the guys who were doing it,” he said. “I was immediately hooked.”

In many ways, Henry is one of an honored few who get to know what for many is the unknowable. He has seen some of the roughest conditions Mother Nature has ever hurled at the lower 48.

His first Yellowstone winter of 1978-79 was exceptionally cold. That winter, there were unconfirmed reports that the temperature was in the neighborhood of 70 below zero on New Year’s Day. It was so cold there was concern that the Old Faithful Snow Lodge that was full of guests would lose heat because “apparently propane doesn’t vaporize at that temperature.” There was discussion of evacuating all the guests, something he considered a bad idea: “If the snow coaches would freeze up and break down, that could have been a bad deal.”

Fortunately, the propane continued to vaporize and the evacuation was not necessary.

Still, Henry’s first solid exposure to Yellowstone as an adult saw such brutally cold temperatures that there was concern for human survival. Yellowstone immediately presented as harsh, dangerous, and unconquerable despite the best efforts of man. When others might have been detoured, Henry knew he found his home.

“I’m just so taken by winters,” he said.