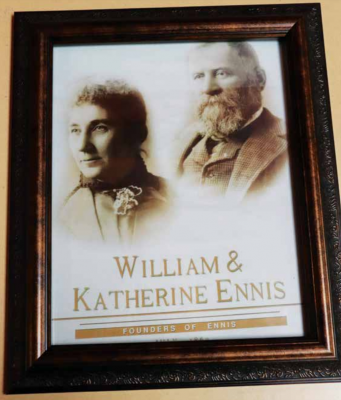 A father of Madison County

The month of March is an especially appropriate time to consider the life of one of Madison County’s early residents and founding fathers, William Ennis. William was the sixth of eleven children born to John and Mary Ennis; who had emigrated to Ireland from Scotland. William was born on St. Patrick’s Day in 1828, at, or near, the village of Kirkestown in County Down.

In 1842, William joined those in the vanguard of what would be millions of Irish immigrants to the United States and Canada during the next ten years. It’s possible that prior to his departure Ennis would have seen the first issues of the popular newspaper, The Nation. Outspoken on behalf of the cause of Irish nationalism, the paper featured articles by such prominent dissidents as John Mitchel, Thomas Davis, and Thomas Francis Meagher. It’s unlikely, however, that William Ennis—or anyone else—could have predicted the dramatic course of events which the Nation would stimulate, or that he would one day meet one of these controversial Irishmen halfway around the world.

William Ennis arrived in the United States at the port of Boston, and initially lived and attended school in the community of Holyoke. He may have briefly served an apprenticeship as a “moulder,” but soon left Massachusetts to seek his fortune. His first stop was in Detroit, Michigan, where William lived with an uncle and found work as a mechanic for the Michigan Southern Railroad Company. Ennis also worked as a conductor before earning a position as a Roadmaster for the Chicago & Rock Island Railway.

Seeking new opportunities, William left the life of a railroad man to begin a freight wagon business serving the gold fields of Colorado. Ennis established a general mercantile store, and small cattle ranch, near Central City, Colorado. He also found his life partner during this time. Katherine Shriver, a native of Ohio, was a schoolteacher living in Iowa when she met William. Following a brief courtship, William (age 33) and Katherine (age 26) traveled to her family home in Ohio and, under the deepening clouds of Civil War, were married on August 5, 1861. Their honeymoon was a return trip to Colorado.

By the early spring of 1863, Ennis decided to join the thousands who were seeking their fortunes in the new gold camps of the Idaho Territory. Katherine, who was pregnant, returned to her parent’s home and William trekked westward with eighty tons of merchandise, 100 oxen, and several mules and horses. Passing the cut-off which would soon become the trailhead of the legendary Bozeman Trail, Ennis followed the established route into Utah, and then turned north; arriving in Bannack on June 10, 1863. As most of the new arrivals, however, William quickly moved on to the new boom camps of the Alder Gulch. Ennis established himself as a reliable and capable businessman, and sold all his merchandise within three days.

Recognizing the need of providing for his stock, as well as those of the rapidly growing population in the Alder Gulch camps, Ennis decided to expand into the hay merchant business. William was greatly impressed by the farming and ranching potential of the nearby Madison River Valley and, on July 5, 1863, led a crew of men out of Virginia City. The crew rode up the Daylight Gulch to Moore’s Creek, then followed the course of the creek down to the floor of the valley. Ennis put his crew to work cutting the lush growth of grass, while he set to work building himself a cabin. William’s cabin was along the bank of Moore’s Creek, at the point where it intersects the present-day Main Street of the town of Ennis. William returned to Virginia City to sell some of his hay crop (at $125 per ton) and to file a homestead claim of a quarter section of land. He filed his claim on August 13…the same day his daughter, Jennie, was born in Ohio.

Ennis prospered in his new enterprises and, in the autumn of 1864, he left his business operations in trusted hands and went to Ohio for an eagerly awaited reunion with Katherine and an introduction to his daughter. In the early spring of 1865, the little family was in Omaha where Ennis assembled another large shipment of goods. By May, the Ennis family had arrived in Virginia City, where they made their home until the following spring.

Another Irishman making his home in Virginia City during the winter was the former Irish revolutionary, now the Secretary and acting governor of the Montana Territory, Thomas Francis Meagher. William built an addition to his Madison Valley cabin during the autumn of 1865, and he and Katherine made an addition to their family on January 29, 1867, with the birth of William John (“Will”) Ennis.

William Ennis aggressively developed his business and ranching interest to serve not only the needs of the Alder Gulch communities, but also a growing number of settlers along the Madison River. Among the enterprises he established were a general store in 1873, a hotel and boarding house, a livery service in 1889, and a telegraph service in 1891. He discontinued his freighting business in 1874. In 1876, Ennis led a cattle drive to Wyoming in order to ship some of his stock to the eastern markets. The quality of life for the Ennis family also significantly improved in 1882, with the construction of a fifteen room “mansion;” the furnishings of which included the first piano in the Valley. Ironically, in a time filled with happiness and prosperity, it would be an old friend who would bring great sadness to the Ennis family.

Martin Peel was among the first friends William Ennis had made after arriving in Virginia City, and the men had worked together in a few projects. In May of 1897, a small building commonly described as a “hall,” located in the settlement of Jeffers, caught fire and burned to the ground. The building was owned in partnership between William Ennis and H. H. Mitchell, and sat near the home of Martin Peel. Examining the site of the fire during the following day, Will Ennis and a few friends discovered a set of footprints which led from the charred remains of the hall. The trail led them toward Peel’s home but the men stopped approximately two hundred yards short of the house. Rumors soon spread that Peel had set the fire as an expression of jealously toward the affluence of his old friend.

Although Martin Peel maintained his innocence, the gossip openly persisted and was a festering source of humiliation to him. Moreover, rumors begin to circulate that the Ennis men were plotting to hang Peel in retribution for the fire. During the following months, Peel became obsessively consumed with the thought that Ennis was going to kill him. On June 18, 1898, both Peel and William Ennis were visiting Virginia City. At approximately 1 p.m., Ennis was standing near the Madison House Hotel and speaking with a friend when Peel approached. When he was within a few feet of the pair, Peel drew his gun and fired a single shot into the left side of William. Peel immediately turned and walked to the sheriff’s office where he surrendered himself. Meanwhile, William walked, unassisted, to his room in the Madison House as a friend ran to the telegraph office and sent a message to the Ennis station… where Jennie Ennis happened to be on duty.

Jennie urgently notified Will of the tragedy, and he immediately rode to Virginia City; arriving approximately an hour after the assault. Although alive, William was badly wounded and in great pain. An examination of Ennis revealed the bullet had initially passed through his left arm, then entered his body where the bullet passed through his intestines, split the spleen, and lodged in his spine. In addition to being attended by local physicians, the family also brought in two surgeons from Helena. William was certain that his wound was fatal, however, and refused any surgery; which a post-mortem examination conceded would have likely been futile. After suffering for several days, William Ennis finally died during the evening of July 4, 1898.

William Ennis was buried in the Virginia City cemetery but, following the death of Katherine in 1931, his remains were disinterred and he was re-buried beside her in the Ennis cemetery.

Editor’s Note: This article was originally published in The Madisonian in March of 2010 and was submitted by the Madison Valley History Association.