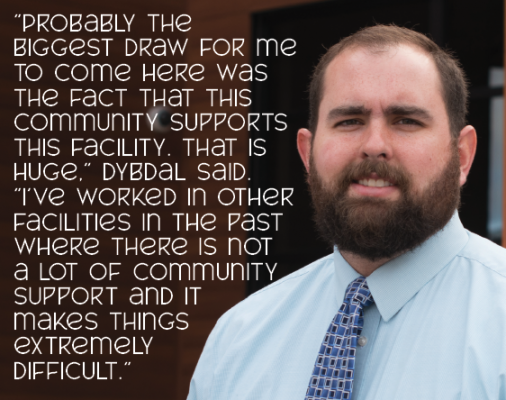 Since freshman year of college, Landon Dybdal’s goal was to become the Chief Executive Officer for a hospital before he turned 30.

“I love it out here,” Dybdal said. “I really do, and that’s not just me saying that.”

Dybdal grew up in Alexandria, Minnesota. He earned a bachelor’s degree in health care administration less than two hours away from where he grew up at Minnesota State University Moorhead. He attended St. Louis University in Missouri for his master’s degree in health administration. Directly after graduate school, Dybdal worked as a clinic manager at Cuyuna Regional Medical Center, a large critical access hospital in Crosby, Montana.

His entire career has been in Critical Access Hospitals. The challenges, opportunities and the lifestyle that comes with rural health care drew Dybdal to Montana’s CAHs.

He spends his off time outdoors, hunting and fishing. This fall, he filled his elk tag on opening day of general hunting season. It was a blistering cold morning, which sent many hunters back indoors. A dark blizzard surrounded Dybdal and a couple of his friends in the early morning hours outside of Virginia City. When it was light enough, Dybdal spotted the bull from a ridge line. He harvested the five by six bull, on his 29th birthday.

“Probably the biggest draw for me to come here was the fact that this community supports this facility. That is huge,” Dybdal said. “I’ve worked in other facilities in the past where there is not a lot of community support and it makes things extremely difficult.”

Within less than a year, the Ruby Valley Healthcare Foundation fundraised $2.5 million in 2016 to build the new RVMC facility. Hospital CEOs are in charge of the entire operation of the facility. The new building allows Dybdal to focus more on providing adequate healthcare to the community and less about aging maintenance problems. His predecessor, John Semingson, left RVMC in much better condition than when he first came.

“He did an excellent job and really set me up for success,” Dybdal said.

Dybdal’s house is visible from the hospital, he lives across the street. As he settles into his role and life in Sheridan, Dybdal sees opportunities to be more involved with his community. But his first hunting season as a Madison County resident will dominate his spare time for now.

Dybdal expects to progress RVMC in the future, but his first six months have been about understanding the staff of 74 and maintaining the critical access hospital. As CEO, he works closely with the leadership team, but makes time to speak with all of his employees throughout the week.

“Someone has to make those tough decisions and I feel comfortable making them,” Dybdal said. “I try to better this facility and better the community through the decisions that I make.”