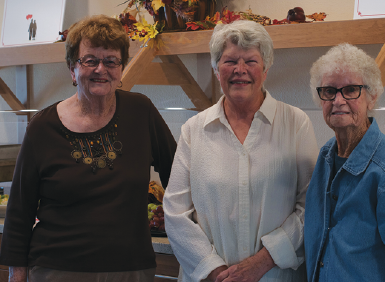 The grand opening of a new community building

Several white signs and quilts lined the walls of the Sheridan Senior Center during its grand opening Oct. 15. The signs acknowledged donors who helped make the new facility possible, and members sewed the quilts.

The Sheridan Senior Center outgrew its fourth home at the old Gemmel House on West Hamilton Street. In April 2019, the senior center launched a campaign to raise $500,000 for renovations on the former Ruby Valley Medical Center Clinic. The money was quickly raised, and the doors opened to the community on a sunny October day.

The president of the senior center, Shirley Sand, and one of the directors, Ann Good, recalled the crowded last lunch at the Gemmel House July 2019. They had to set up tables in unconventional spaces to accommodate everyone.

Shirley is the cook at the Sheridan Senior Center, serving lunch Monday through Friday. On average, she prepares 40 to 50 lunches a day, which is roughly a third more than what the former building could seat at once. The new building more than doubles the seat capacity, comfortably seating about 75 people at a time.

The Sheridan Senior Center employs one full-time employee and two part-time employees. With the help of its 20-plus volunteers, the private non-profit organization aims to improve the lives of adults older than 54 through social interactions, basic support and nutritious lunches.

The new facility enhances the opportunities for the senior center to be successful in its goal of enriching the lives of its participants, volunteers and staff. Providing a space to gather with activities and services, the senior center opens its state-of-the-art kitchen and facility for the community to rent.

The Sheridan Senior Citizen Food and Service Center was established in 1979 and is now located on Crofoot Street. The center is financially supported with two annual mill levies in Madison County, Congregate Meals and Meals on Wheels.

The Ruby Valley Medical Center Board of Directors leased the building to the Sheridan Senior Center for 75 years, costing $1 a year.

The center is located near the Tobacco Root Mountains Nursing Home, an ambulance barn, RVMC, the CHC Pharmacy and the Sheridan Schools.

David Grigsby from Montana’s American Institute of Architects designed and converted the 3,6000 square foot space to incorporate a large dining area, a commercial kitchen, a reception area with a gas fireplace and bathrooms. Toni Simonsen was the project manager who kept the work in the area, hiring local tradesmen for the project.

Shirley prepared the first meal in the new kitchen the next day.