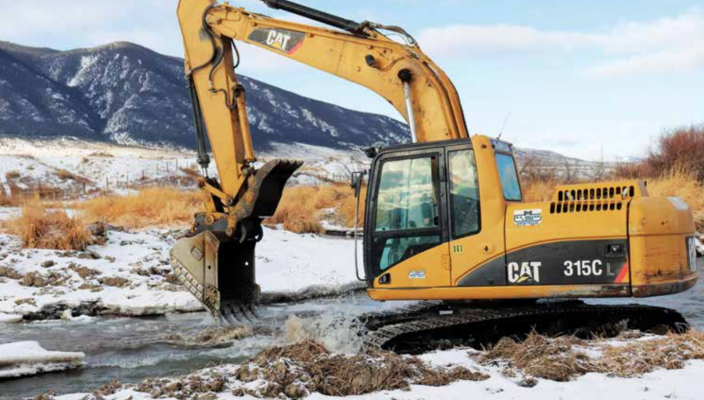 Science and art converge in the Ruby Valley

For Ruby Habitat Foundation employees Les Gilman and Dave Delisi, working on the Woodson Ranch in Alder is truly a labor of love. This passion for the land becomes evident when they discuss the foundation’s 1,100-acre property.

Sitting down for a chat in the little log cabin that serves as the ranch’s office, their eyes light up, checking the time to see just how long they’ve got for the discussion – whether it’s about the number of moose spotted there (16 different moose in one day this fall) or how many total bird species have been counted on the ranch (119).

Lately, though, the conversation has been focused on Clear Creek, a windy, 11-mile braid of the Ruby River that partially runs through the working ranch. Clear Creek used to be even windier, but in the 1950s, using newly available heavy equipment, ranchers molded and straightened it to function more as an irrigation ditch than a creek habitat.

Due to the modifications, as well as historical flooding events, Clear Creek was flowing faster downslope, eroding the channel bed and completely disconnecting the stream from its floodplain. Water quality went downhill with it.

Funding concerns and Craig’s passing in 2011 put the project on hold, but in a collab with the NRCS, Spanish Peaks Engineering and Kingfisher Consulting, a plan was eventually devised to slow down the creek, reestablish several oxbow turns and reconnect the creek to its floodplain.

Years in the making, the effort is officially underway.

Now, heavy equipment is back to effectively reverse the changes to the creek. Crews with R.E. Miller and Sons of Dillon began excavation work in late December, and already by early January Clear Creek’s waters were redirected into a meander that had been cut off by an irrigation ditch for decades. Pointing to willow branches strategically placed along the riverbank, Gilman, the foundation’s executive director, called the work “a mixture of science and art.”

The purpose of the project, explained Delisi, Woodson Ranch’s outreach coordinator, goes back to the foundation’s mission. “Which is really, essentially, to balance agriculture and wildlife, and then let people see what happens when you do that.”

Unlike many large working ranches, Woodson Ranch welcomes the public to come appreciate the land while still maintaining its agricultural background. Delisi works to manage the flow of visitors. The Clear Creek project, he said, is consistent with finding the balance between ranching and land conservation.

“We’re taking Clear Creek, and moving the channel, and we are actually going to lose a little bit of agricultural production by doing this,” he said. “We are deliberately dropping our revenue stream from agricultural production, and exchanging it for wildlife purposes, in this case fish, and whatever else benefits from riparian area.”

The work will also upgrade and relocate irrigation ditches which historically stopped trout from spawning, re-establishing new ditches with fish-friendly dams. “As an avid fisherman myself, and one who has counted the fish in spawning beds in the rivers for the past couple years, I think that’s going to have tremendous benefits,” said Delisi.

Those benefits, in theory, go beyond just Clear Creek, which separates from the Ruby south of Alder and then comes back into the Ruby just north of Woodson Ranch. “Now, when the fish come upstream to where the Clear Creek join, they’ll have a choice they haven’t had in 70 years,” said Delisi.

Gilman shared in the excitement of the project. “By removing these fish barriers and by improving water quality and quantity, it will basically bring that braid back to life,” he said. Around a half a mile of water will be gained, and by raising the streambed, plant life will also be restored.

Prior to the current groundwork, which addresses Clear Creek water quality, water quantity was addressed a couple years back. During summers, explained Delisi, the creek would get dewatered. Temperature gauges on the ranch, used to monitor fishing conditions, found that Clear Creek was a hot spot.

Working with surrounding ranches, and using a USDA grant, pivots were installed that allow for more efficiency in irrigation. The source of the water for those pivots also switched from in-stream to stored water from the reservoir which comes from a different ditch. Suddenly, Clear Creek had more water in it in August, said Delisi, than it’s probably had in 70-some years.

Anyone interested in doing so is welcome to come experience the work being done firsthand. Flyfishers need to sign up ahead of time with Delisi, since only four fisherman can access the property per day. Typically, about 400 people a year visit the ranch to fly fish the property’s combined eight miles of water.

But it’s more than just fishing – bird watchers, artists, hunters and those just looking to take a stroll also find themselves on the property. Just over 1,000 came in 2020 and the year prior nearly 2,000 people visited. While there, visitors are likely come across the ranch’s resident cattle, various bird species, deer, and maybe even a porcupine or moose.

Speaking of those massive, creek-loving ungulates, Delisi said he keeps an eye on what he calls affectionately a resident moose. The cow, with her distinctively notched ear, has given birth on the ranch since 2015 when he started working there, and likely, he said, before that. In 2020 she gave birth to twins, a feat which happens less than 20% of the time. “It’s indicative of good habitat, safety and food supply,” he said. “She raised them and they look great.”