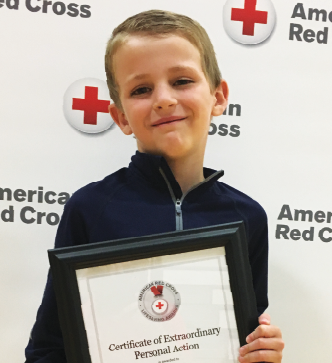 The American Red Cross awarded Parker Walter, 6, with a Certificate of Extraordinary Personal Action from their National Lifesaving Award Program in the Sheridan School gym Sept. 26.

It was the first time in at least 20 years that a Montanan has been awarded a Lifesaving Award.

“He represents what the Red Cross does every day,” ARC communication director for Montana and Idaho, Matt Ochsner said. “Which is to save and help people.”

Parker and his 4-year-old brother, Cooper, played inside their fenced backyard in Sheridan as their mother, Shaleena, and grandmother, Marilyn, gardened. It was late in the Spring 2019 season and the drainage ditch behind the house flowed full and swift.

Unknown to Shaleena and Marilyn, the fence was left unlocked and the two young boys got out. Cooper wondered over to the drainage ditch about 15 feet away. A few planks lay across the 4-foot-wide irrigation ditch leading to more of the Walter’s property.

Most of the time the ditch is dry, but the irrigation system was turned on to capture the wet spring. About three feet deep of forceful water flowed approximately 100 yards from the Walter’s property to a grate-covered culvert, pinning debris and trash, before continuing to rage.

As Cooper walked over the footbridge, he fell over the north side of the bridge. He grabbed onto one of the wood planks as water pulled his feet under the bridge and splashed around his neck. Parker heard Cooper’s scream and yelled for his mother as he went to his brother.

Seconds rushed as Shaleena and Marilyn ran to the boys. When they got to the footbridge, both boys were soaked but on land. At four years old, Cooper feared for his life. Dripping on the bank with his brother, he cried that he didn’t want to die.

“It all happened so fast,” Parker’s grandfather, Tom Walter said.

A few weeks later, Tom stumbled across the music video, “Angels Among Us” by Alabama. The music video paired the song’s lyrics with the faces and stories of individuals who responded heroically in extraordinary circumstances.

A 7-year-old was highlighted in the music video. In the caption, it said that the ARC honored him for saving a drowning child.

“I thought, hey, that’s what Parker did,” Tom said.

The ARC offers training like CPR, lifeguarding certifications, babysitting classes and many others that can contribute in saving a life. Over 350 individuals received a National Lifesaving Award this year. Eighty of those awards went to individuals like Parker, who performed lifesaving actions without ARC training.

“He deserves this, he’s an amazing kid,” Tom said.

ARC gave a short presentation, before awarding Parker in front of the entire Sheridan Elementary School body and most of his family. The next day, Parker celebrated his seventh birthday.

“We thank him for his heroic and brave actions,” Ochsner said.