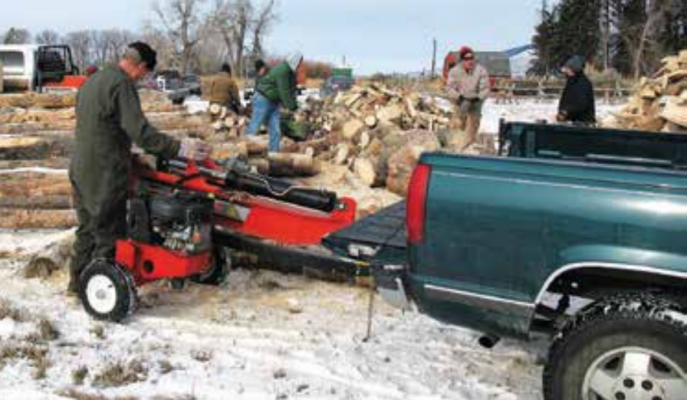 Proud of the Ruby Valley

After chainsaw theft, community comes together to support the wood bank

Frank Ford was almost in tears last Friday. The day before, it might have been due to the three chainsaws stolen from the Firewood Bank of the Ruby Valley, but that day it was from the immensely generous community response to the theft.

“Yesterday my entire vocabulary was four letter words, but today I have been getting calls from people in the community wanting to help,” Ford, financial director of the wood bank, said.

Everyone from autobody repair shops, the ‘old folks’ home, as he called it, and a restaurant in town—that wanted to host a spaghetti dinner and give all the proceeds to the wood bank— heard what happened through word of mouth and reached out to help.

“Every rancher in the Ruby Valley is calling me and asking me what they can do,” Ford said.

The Firewood Bank of the Ruby Valley cuts down lodgepole into firewood length pieces, splits it and delivers to those who cannot do this task themselves. Ford said the nonprofit normally goes through 90 cords of 4x4x8 stacked firewood, provided for 25-30 families. Many families that use the wood rely on wood fire as a main source of heat.

This year the demand has been higher, nearing over 100 cords, and the wood bank’s income has been down. Ford associated both of those components with the coronavirus.

As far as expenses go, the wood bank has to maintain their truck, shed and tools. The three chainsaws that were stolen out of the wood bank shed cost about $1,200 a piece, Ford estimated. “And that’s a major blow to a little outfit like us,” he said.

The average age of wood bank volunteers is 70, with a few in their eighties. Ford explained these tools are needed by the wood splitters to, “keep our neighbors taken care of.”

“I’m a little antsy because of this uptick in demand, whether we’ve got enough on the wood lot to get us all the way through the winter,” he said. The wood bank crew typically cuts wood in the summer to reach the desired quantity to deliver in the fall and winter. With that schedule, most of the chainsaw work has been done up to this point.

“We’ll come out of this alright I think,” Ford said, with help from such a generous community.

“It makes you proud to be a Montanan, doesn’t it?” he asked as he took a moment to reflect on all the calls he has received. The community has a big heart but understands that the wood bank is run by people with equally big hearts.