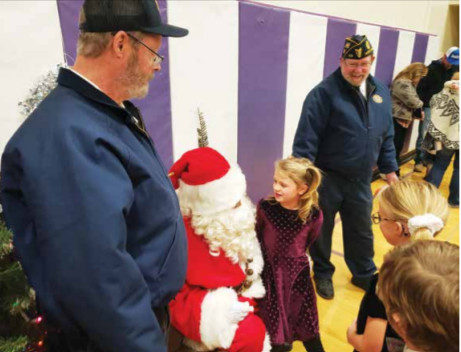 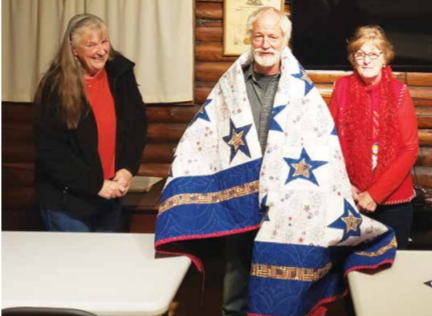 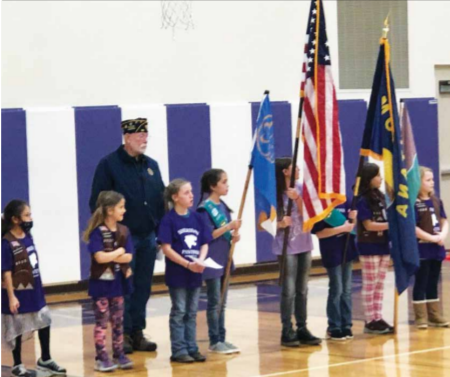 On 15 December 2021 the Sheridan Elementary School conducted its Pre-K to 3rd Grade Christmas Concert featuring individual class musical programs for family and friends. At the end of the concert Post 89 provided a Santa Claus to meet with the kids in the audience and after hearing what the kids wanted for Christmas, they were provided with a bag containing fruit and candy. Other Post members were stationed at the school entrance to hand out oranges to the departing families. Over 90 children visited Santa and received their treats. Leftover bags of goodies were taken to the Tobacco Root Mountain Care Center (Nursing Home) and the local Assisted Living Facility (Home Park) for distribution to their residents. (L to R ) Elf Charlie Rossiter (Past Commander Post 89), Santa Clause (Tony Simonsen) greeting a child and Elf Cliff Morgan (Post 89 Commander).

At the Sheridan Post 89 meeting on 14 December 2021, Post member Lynn Hofland was presented his Quilt of Honor by the Patchwork Pals Quilt Guild. The Guild puts the quilts together for Ruby Valley Veterans and after getting the quilt Nationally Registered, they are presented to the Veteran at a suitable ceremony. (L to R) Patty Bates (Patchwork Pals Quilt Guild President), Lynn Hofland (Post 89 member) and Janet Larson (Guild member who made the quilt).

Post 89’s Bugler Greg Granken (Past Vice Commander) provided Sheridan’s Girl Scout Troop 3535 with Flag Etiquette training in preparation for the Troop to conduct the opening flag ceremony prior to the start of Sheridan’s Basketball game on 20 December 2021. This is the second year that Granken has provided training on the care and use of the American Flag to the girls. The Troop’s Girl Scouts did an outstanding job of presenting the flags as part of the opening ceremony.

On 3 December 2021 Sheridan Post 89 participated in the annual Sheridan Christmas Stroll. It started with a parade of vehicles that drove down Sheridan’s Main Street before proceeding to parade past the Tobacco Root Mountain Care Center (Nursing Home) and the Home Park Assisted Living facility. The Post provided a truck float for the parade that had Post members along with Santa Claus riding in the back of the float, waving to the Community along the parade route. After the parade, Santa set up shop in front of the Post building to greet all kids who wanted to talk to Santa. Over a hundred children sat on Santa’s lap. Post member Dave Dixon drove the truck in the parade. In the back are Post members Bob Reimard, Julie Witt (Post Vice Commander), Cliff Morgan (Post Commander) and Charlie Rossiter. Santa is the Post Adjutant, Mike Morgan