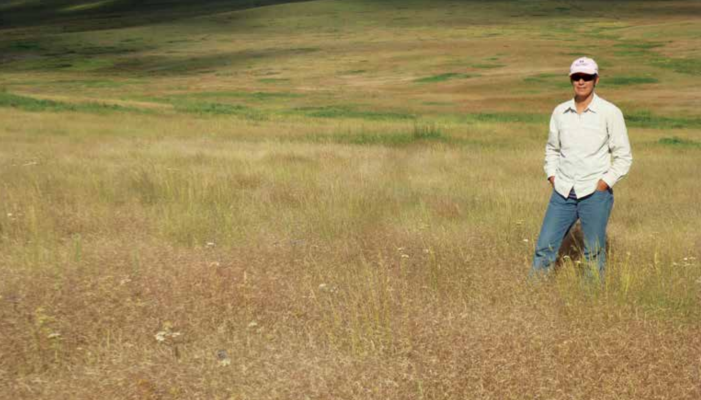 Outstanding in her field

Unlike noxious weeds, which can oft go unnoticed, Mangold’s work has not – the noxious weed guru was recently recognized with a national award by the Weed Science Society of America for her excellence in outreach.

Mangold was happy to discuss the recognition with The Madisonian, but the topic of conversation quickly shifted to an opportunity for her to pass along more invasive species knowledge to her greater community. Mangold sees three challenges facing Madison County’s invasive species management: large, difficult to access land areas, high levels of recreation bring disturbance and species introduction, and small acreage interfaces posing a coordination challenge between neighbors.

Other challenges include absentee landowners who may only spend time here a month or so out of the year, and may be unaware they even have a weed problem. Then there are newcomers from other areas of the country who may also need guidance, as they aren’t aware of which species are native or invasive on their land.

Whatever the challenge, Mangold recommends that any Madison County residents looking for advice should reach out to their local MSU Extension Office, located in Whitehall, as well as the Madison County Weed District. Experts at these locations are there to help identify issues and create a plan of attack.

Some of the main invasive offenders in the Madison and Ruby valleys include spotted knapweed, hoary alyssum, cheatgrass, and a newcomer to the scene, ventenata. Ventenata was added to the local noxious weed list in 2019, and poses a threat to the landscape since it’s unpalatable to livestock and wildlife, has shallow roots which do not adequately hold soil in place, and dies off each year to dry out and fuel wildfires.

“It’s concerning, because if it ends up covering large acreages and displacing native, perennial grasses which are providing forage for livestock and wildlife, those end up being dominated by ventenata and forage resources are depleted to almost nothing,” Mangold explained. “So, I think this species could pose a big threat to Madison County given the ranching community and wildlife there.”

Early spring may not seem like prime time for noxious weed control measures, with most sprouts yet to appear, but Mangold said now is actually a great time to start thinking about what can be done to slow the spread of invasive species.

One species that can be tackled early, said Mangold, is cheatgrass, which is already greening up in Madison County lands. Cheatgrass has been a topic at a number of Mangold’s Madison County presentations and poses a problem here because, like ventenata, it’s annual – dying off to become wildfire fuel as soon as precipitation lessens.

Unlike ventenata, cheatgrass is edible for livestock and wildlife in its early stages, but is not a great food source. Since it comes up early while other grasses are dormant, early spring is the time to treat this invader via herbicide, mowing, or grazing before it goes to seed.

When it comes to flowering noxious weeds, Mangold noted that mitigation often needs to happen before those flashy flowers even appear. Once those flowers are out, seed production is not far behind, and the opportunity to stop the growth cycle via herbicide has been missed. “To get the best control you need to be managing them before that point, and you need to know where they are before the flowers make them easier to see,” she said.

Noxious weed offenses are many: choking out native species, depleting livestock and wildlife forage, fueling wildfires, contributing to erosion, and can prove toxic to livestock, wildlife and even humans. Mangold hopes more Montanans will take the time to understand the issues, and then take steps to curb the spread.

Whether you’ve got a couple of acres or a wide expanse of land, anyone interested in learning more about how to stop the spread of noxious weeds in Madison County should reach out to the MSU Extension office at http://madisonjefferson.msuextension.org/ or by calling 406-287-3282 and/or the Madison County Weed District at https://madisoncountymt.gov/222/Weed-Office or 406-842-5595. Madison Valley residents can also reach out to the Madison Valley Ranchlands Weed Committee at https://www.facebook.com/Madison-Valley-Ranchlands-Group-Weed-Committee-... or 406-682- 3731. Madison County’s native plants and wildlife will thank you for it.