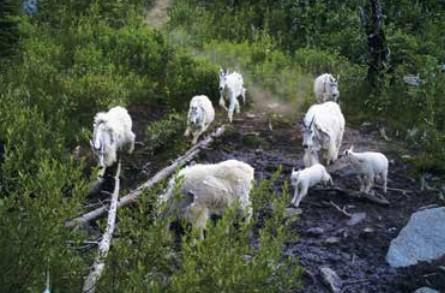 One hundred and one mountain goats!

It took 18 volunteers hiking more than 60 collective miles in steep terrain to put eyeballs on the places where Rocky Mountain goats live in Henry’s Mountains, below the Madison Range, south of Quake Lake and Hebgen Lake. The final tally of the 2022 cooperative goat survey led by Montana Fish, Wildlife and Parks (FWP) and Rocky Mountain Goat Alliance (RMGA) is good news for conservationists and hunters: volunteers found a minimum of 101 mountain goats, with the possibility that even more goats are living among the peaks and basins in Henry’s Mountains. This is a substantial increase over 58 goats found in the 2018 ground survey, and 77 goats counted in 2020. Because FWP relies on population data to determine the number of hunting licenses to issue, the current limit of three mountain goat licenses for the area known as “Hunting District 361” could be increased to four.

Julie Cunningham, wildlife biologist, FWP, who authored a report on the work, “Rocky Mountain Goat Alliance and Montana Fish, Wildlife and Parks cooperative goat survey results,” was pleased with the story that the volunteers’ data tell.

“RGMA volunteers always work hard and do a great job,” Cunningham said. “This year did not disappoint. Our volunteers returned excellent-quality data with numerous goat sightings.”

The youngest of those volunteers was Lila Durkee from Bozeman who turns nine next month. Lila accompanied her father Shaun to Sheep Lake where they spotted 18 goats far away, atop a 10,000-ft. peak. Lila found the hike wasn’t easy.

“A lot of switchbacks. I kept myself going by telling stories to my father,” she said.

Shaun Durkee and his wife coown Alpen Fuel, a manufacturer of backpacking food. This was Shaun’s second tour of duty with FWP and RMGA; he volunteered for the 2020 goat count.

“This is part of our participation in ‘2% for Conservation,’ along with some other local businesses,” Durkee said. “Every year we donate time and proceeds to a conservation project.”

RMGA recognized the important role played by volunteers in a survey that must be conducted from the ground.

“It’s fantastic to be able to track and see the population trends in an area like the Henry’s! And the numbers seen this year were great. Our volunteers were marvelous at spotting and recording goats,” according to Stacy Berry, RMGA.

Berry encouraged anyone who is interested to get involved in projects like the goat counts. More information can be found at goatalliance.org.

“Science and conservation often seem like too big of issues for an individual to tackle, but citizen science projects like the RMGA’s goat counts are a wonderful way to get involved, and enjoy mountain goats and mountain goat terrain,” she noted.

In addition to counting the mountain goats, volunteers documented the animals’ sex, maturity and observable behaviors.

In order to avoid double-counting, volunteers assigned to seven survey units conducted their surveys during the same time on the same evening, July 16, using binoculars and spotting scopes. The observed animals were classified as billies, nannies, yearlings or kids. FWP compared the reported time of day, location, and total numbers to remove duplicate counts.

• Unknown sex/age - 5 What do we know about the goats in Henry’s Mountains?

FWP’s Cunningham says mountain goats are not native to the Madison Mountains nor to Henry’s Mountains. “Goats were not transplanted into the Henry’s Mountains either – so how did they get there?” she says. “Goats were transplanted in the Madison Mountain Range in the Spanish Peaks and Wolf Creek in a series of transplants from 1947-1959. Eighty-five goats were brought in from three different sources: Deep Creek (Teton County, Mont.), Canyon Creek (Beaverhead County, Mont.), and Van Lookout (Lake County, Mont.). These goats explored their new ranges and their populations grew. Wolf Creek is less than 20 airline miles from the Henry’s. It is most likely that pioneers from this new population trickled south into the Henry’s.”

When asked why the goat counts occur in July, Cunningham said July is a good time for the “biology of the species.”

“Nannies separate from the herds in late May and early June to give birth to their young,” she explained. “Once the young are mobile, nannies and kids can rejoin herds. When we count at this time of year, we can get a view on kid production. Also, July is a friendly time of year for humans to get out and count! July makes for pleasant backpacking with low risk of snow falling and usually clear skies before smoke comes in.”

Cunningham hopes that the next count will be scheduled in 2024.

“As we raise licenses to increase hunter opportunity, it becomes especially important to keep monitoring the herd to ensure that the population remains healthy and that the harvest is sustainable.”

She says the partnership with RMGA helps people learn and become enthusiastic about the species. RMGA provides resources to hunters such as videos and a Facebook page that help hunters field-judge billies and older goats, for better population management.

“As a wildlife manager, counts like we did in Henry’s Mountains help me have the data I need to provide hunting opportunities that are sustainable in the long-run,” Cunningham said. “I have done nine counts now with RMGA, and am always impressed and pleased with the quality of data that I get.”

Look for this recent information to be calculated into setting hunting regulations and communicated to next year’s hunters.