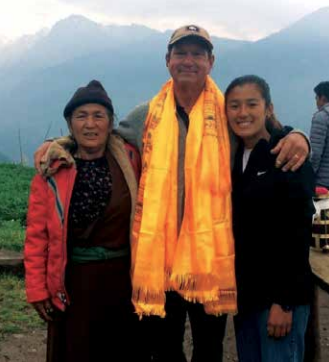 Not so average Joe To Nepal, with love

Peter Schmeiding will be the first to tell you: he’s not one to talk about himself. But for the Ennis, Big Sky and Bozeman dentist, there’s a lot more than just a successful dental practice to discuss. He’s also chairman and president of Tsering’s Fund, a non-profit with a goal to help underprivileged Nepalese children, changing lives through scholarships, medical care and basic living assistance.

If, 30 years ago, you’d asked Schmeiding where Nepal was on a map, he wouldn’t have been able to tell you. If you’d inquired as to whether he’d imagine himself making a documentary, the answer would be a resounding “No.” But 24 years ago, upon meeting his future wife Karen, an avid climber and traveler to Nepal and the region, Schmeiding’s eyes were opened to a country and culture bursting with beauty around every corner.

Unfortunately, along with that cultural and natural splendor, Nepal is also home to great disparity which often results in young girls being sent away for arranged marriages and prostitution. Tsering’s Fund started as a private effort between Peter and Karen who saw an opportunity to impact the lives of Nepalese children; helping them go to school and assisting older individuals with living expenses.

The Schmeidings soon recognized an opportunity to start a charity, inviting others to join in the effort. That they did, and over the years Tsering’s Fund has grown by leaps and bounds. There are currently more than 400 Nepalese girls, from kindergarten to law school, attending class thanks to assistance from the fund.

Covid did throw a wrench into the process, with students in Nepal just now heading back to in-person class in the coming weeks after nearly two years of remote learning.

The pandemic also threw an unexpected wrench into Schmeiding’s last visit to Nepal in April of 2021. The trip was to be his normal three-week visit to the country and his family and friends living there. This time around the mission was to begin laying the groundwork for an upcoming documentary film he was producing and writing – a creation detailing the life of his adopted daughter Maya.

As Peter busied himself in a remote region of Nepal the Delta variant began to take hold in India, rapidly spreading to Nepal. A medical disaster ensued; the country closed.

Schmeiding was stuck, but good fortune intervened. Tsering, the namesake of the fund, happens to own a very nice hotel in Kathmandu. She took Schmeiding, his two adopted daughters Lhakpa and Maya, and welcomed them to her completely vacant inn for three weeks while Peter awaited the go ahead to return home.

The girls, who reside in Nepal, continued their remote lessons in dentistry and nursing. The trio had the unexpected opportunity to spend some quality time together at a five-star hotel complete with a chef, waiter and housekeeper. They were safe and treated like Tsering’s family, since of course, that’s essentially what they are.

It wasn’t all fun, though. In the meantime, Peter watched as the city’s medical facilities, already less than stellar for most Nepalese, began to collapse. People were told by the government to not even bother going to the hospital. Schmeiding described the grim scene in which the sick died in hospital parking lots as “a terrible movie.” At one point the government-issued virus update simply read, “We give up.”

The situation was bleak, but even in the darkness of a Delta lockdown Peter and his daughters found a purpose: feeding hungry animals. The thousands of dogs in Nepal rarely have official owners – they live as strays and eat thanks to the spoils of the people who fill the streets. When those people vanished, the dogs began to starve.

Not ones to sit idle in the face of need, Peter and his daughters seized the two hours of the morning when Kathmandu residents could go outside to procure 50 pounds of dog food a day, hiking as fast as they could down the streets, scattering kibble along the way in their effort to feed hundreds and hundreds of hungry hounds. It was an experience Peter documented regularly on his Facebook page, and one that filled the idle days with purpose.

Peter returns to Nepal on Sep. 16 to continue his scouting for his documentary, likely to be titled “Maya of Helambu.” The story will detail the plight of Nepalese girls, as well as showcase efforts to curtail their trafficking and marrying off (Hint: it’s education). The story will focus on the uplifting tale of his daughter, Maya, who despite losing both her parents and at one juncture having to hike five hours through mountainous, leech-infested Nepalese terrain to and from school each day, will soon graduate from college and move to the United States.

Official filming of the documentary begins in mid-October and the film will be likely be released in the spring of 2022. Schmeiding said he hopes to submit it to film festivals in the hopes that it will be picked up by other entities that can spread his mission of education and hope for the girls of Nepal.