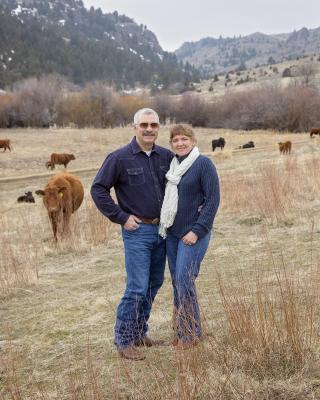 The Madison Conservation District has selected Jerry and Jolene Brush and the Jackson Family Ranch as the winners of the 2018 MCD Stewardship Award. The Brushes will accept the award during a banquet at the Round Barn in Twin Bridges on Saturday.

"According to Montana Stockgrowers Association, their cattle carry one of the oldest family-run brands In the state. Because of changing land ownership, they've had to consolidate their grazing and haying operations to adjust the resultant loss of lease ground. Although their grazing acres have decreased, Jerry and Jolene have expertly maintained or improved the native pastures through a carefully monitored rotational grazing cycle for their cattle. They have also greatly improved their hayfields by systematically revamping and redoing their old alfalfa fields, increasing yields from 1-2 tons per acre on their flood irrigated fields. Scheduling replanting based on their best estimate of available water; they were able to replant their fields effectively and thus prevent excessive wind and soil erosion. They also increased their use of hay pastures winter grazing to improve the soil organic matter and reduce fertilizer requirements for those soils.

"Jerry and Jolene work intensively to control the disease and weeds on their ranch. Each year, the Brush family wage war on weeds through spraying, digging or hand-pulling on the 12,000 acres they own and lease."

Owens continues to describe a successful expansion project undertaken by the Brushes.

"In 1989, Jolene and Jerry decided to go into the foundation seed business; using their wedding money to install a laminar flow hood in their garage where they began producing nuclear potato tubers. Jolene, with her previous experience at the Montana State Potato Lab, oversaw the greenhouse side of the Brush operations. Although they started in their garage, demand for their cultivated tubers quickly required more space. Now with over 26,000 square feet of greenhouse, they produce between 60,000- 70,000 nuclear tubers each spring. Instead of just Jolene and Jerry working the greenhouses, they seasonally employ 15-20 people to help with their greenhouse every year. Jolene also has diversified into producing mint, raising between 150,000-160,000 plants each year for producers throughout the United States and Canada. In fact, she now holds the mint seed bank for the Mint Industry Research Council, conserving genetic diversity and helping safeguard against disease. This seed bank thus functions as backup system in case of environmental catastrophe in the United States and Canada.

Jerry and Jolene Brush epitomize the stewardship ideals, caretakers of the land, environment and family and deserve to be the 2018 Stewardship Award winners."

Jerry Brush said the weather is the biggest challenge to operating the Norris ranch. "Weather and dealing with droughts - you never know what's coming with hay supplies or cattle prices," he said. "We just try to shoot for the middle and try no to overdo it or under-do it. It depends on the snowpacks and rainfall, because we flood irrigate everything. Back when they homesteaded around here, they had these nice meadows down here, it just made sense that they would stay here. You have natural hay down here and good water supplies. The bad thing about it now, if we want to expand our hay ground, with pivots or whatever, it doesn't work here. And the flood irrigation has been tough here for the past couple years."

Jolene Brush said weeds have become another big challenge. "The weed problem has come up, and it's almost required hiring a full-time person for three or four months," she said. "But we don't do that. Our family just does it. We have four kids and they help too. But to control the weeds is a real challenge. We have to be on top of it all the time. You can't let it go."

"Thirty years ago or so, there were a few weeds here and there, and now it's huge," said Jerry. "At first, I thought, 'we're going to nip this in the bud, we're going to get rid of these things.' That never happened. It's just a continual thing every year now, spraying, trying to keep it at bay. We battle the knapweed and houndstongue. We don't have the leafy spurge."

"Knapweed was introduced and the seeds will stay dormant for 10 years or more," said Jolene. "Each seed head produces hundreds of seeds, and it's allelopathic, which means it puts out a poison for other plants. Nothing will grow around it, except for it. It will take over your good grasses and hurt grazing."

Despite the challenges and hard work, the couple has never considered giving up ranching. "We like living here," he said. "You don't make a whole lot or anything, but it's a great place to live and raise our family here."

"That's one of the most important things, is raising a family in this environment," said Jolene. "The work ethic can teach them a lot of good values. It's been in my family for so long. It means a lot to my dad. He just really wanted it to continue. I wouldn't think about selling or anything because it would break his heart."

The couple maintains their ranch in an environmentally responsible manner because they think it's the right thing to do. "We're Christians, and we believe God has put us here, and God has created everything, and we're the stewards of his creation," said Jerry. "That's kind of where we're coming from."

The MDC Awards Banquet starts at 5 p.m. Saturday at the Round Barn in Twin Bridges. Dinner tickets are sold out, but general admission for music and dancing is $10 at the door after 8 p.m.