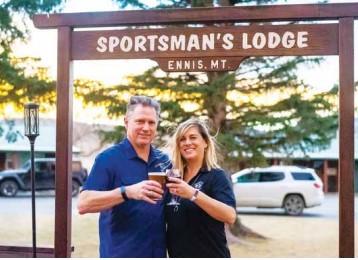 CORRECTION as of March 31, 2022. THE OWNERSHIP OF THE SPORTSMAN'S LODGE HAS CHANGED. PLEASE WELCOME THE NEW NEW OWNERS BRIAN and JANICE SPRAUGE.

Similar to many other transplants inspired to relocate to Montana, former NHL player Bob Kudelski, 57, decided to make the jump after he watched the blockbuster fly-fishing-family drama “A River Runs Through It.”

“I played with the Florida Panthers (from 1993-1996) and during one off season, I saw the movie (released in 1992),” said Kudelski. “Montana seemed like a really cool place, and my wife, France, and I figured that we should go out there (to Montana). Six weeks later, we visited Missoula, Hamilton and Glacier National Park.”

Bob retired from professional hockey in 1996, and subsequently the Kudelskis ended up buying a small cabin in Sula, the south end of the Bitterroot Valley. He and France called Sula home for a short period, before Bob decided on a second act, this time in the hospitality industry.

“After I retired, we bounced around a little and we couldn’t find anything that fit (our requirements as lodge owners). We bought a guest ranch, the Absaroka Mountain Lodge, in Cody, Wyo., and ran that for five years, but we ended up selling it and buying a hotel in Pagosa Springs (Colo.). I needed something to do, and if you retired back then, you knew that you couldn’t retire forever. The hospitality business was something that I enjoyed. I went to school for business and I wanted do something with my degree. We wanted to get to Montana, sold the Colorado property, bought a home in Bigfork, and found the Sportsman’s Lodge, and now here we are.”

Sportsman’s Lodge is similar to the property that the Kudelskis operated in Cody, an older set of structures, with a main lodge circled by cabins, fixed in a relatively pure mountainous setting.

“The Sportsman’s Lodge has been around since 1945 and it once had a runway where the planes would land for hunting and fishing trips. We pretty much looked at lodges in every little town in southwest and northwest Montana, everything west of Billings. We have been coming to Ennis since the early 1990s, and we were here in 2018 for Labor Day weekend and found it was for sale, and we bought it…we ended up buying it, moved her, lived in manager’s apartment for the first year and a half. We since have moved downtown.”

The Kudelskis have navigated the unforeseen bumps of the past few years with a well-preserved sense of optimism and intention.

“We got here in January 2019 and in 2020 COVID closed us for six weeks, but we picked up where life left off. We were lucky not to be closed forever, like in some other states. We’ve converted the inside of the lodge, rebranding it as a sports bar, have done some redecorating, upgrading the cabins with new beds. When we first got here, the food was probably subpar, and we have revamped that part of the business…in the winter we have lots of locals, Christmas parties, whereas the locals fade back in the summer.”

East Coast to NHL to Montana

It was a long, snaky road to Montana for Bob Kudelski, a native of Springfield, Mass., and Yale University graduate. (FYI: only one player has ever made it to the National Hockey League who was born in Montana, a winger named Bill Lindsay (1993- 2004), and he was actually raised in Canada and even considers himself “Canadian, through and through,” according to a recent interview. Brought up in Fernie, British Columbia, Lindsay went on to play in 777 NHL games, including several seasons with the Florida Panthers, which, by the way, overlapped with Bob Kudelski’s three seasons with the team from 1993 to 1996.) He grew up watching ice stars such as Boston Bruins defenseman Ray Bourque on television and, as it turned out, only a few years later, he would be playing against Bourque and other icons at the highest level of the sport. Kudelski saw his first action in the NHL in 1987-88, as a member of the Los Angeles Kings; one year later, the hockey world hit the roof with the news that the Edmonton Oilers had traded Wayne Gretzky, Canada’s most popular sports star and its transcendent national emblem, to Los Angeles.

“I made the Kings’ training camp out of college as a fourth line right-winger, and started the (1987-88) season, but ended the rest of the year in New Haven (in the minor leagues). The next year I got cut (by the Kings after 14 games) and sent to the minors and then called up a few times. I was called up one weekend, and one Saturday night, Ron Duguay, (who played helmetless), he went into the boards head first, and I ended staying two more weeks. In 1989-90, I stayed up in the NHL from there. I played with a lot of guys who were pretty well known. Gretzky. Jari Kurri. Steve Kasper. Barry Beck. Larry Robinson. Luc Robitaille. Marty McSorley. A long list. There was no internet, but somehow people knew when Gretzky would come to the hotel. You would be in Winnipeg, it would be ten degrees, and there would still be 25 people waiting for Wayne to show up to get his autograph.

” In 1992, Kudelski was traded from the Kings to the freshly re-created and re-launched Ottawa Senators, abruptly switching tracks from normally sunny California – where virtually yearround you could show up to the rink for practice wearing your shorts and T-shirt – to commonly single digit Ontario. On the upside, where the abundant sporting and entertainment existence in Los Angeles sometimes dwarfed the hockey scene, Ottawa fans, lacking such distractions, feverishly rallied behind their squad with single-minded fixation.

During the 1993-94 campaign Kudelski was shipped from Ottawa to the inaugural Florida Panthers, his final stop in the league. Bob’s NHL career ended in 1996, 442 games, 139 goals, 102 assists, including a personal-high of 26 goals with the Senators in 1993-94. He never hoisted the Stanley Cup, though the Panthers did appear in the finals the very year he last played for the team in 1995-96, swept in four games by the Colorado Avalanche.

“I ended my career at 32, but luckily played for about 10 years,” said Kudelski. “Back then the season would end and you had a couple of months off, now it is like a movie star, and you are working out all of the time, and there is a lot more money at stake now. At the end of my career I ended up coming to Montana…I didn’t really want to work in an office or work for anybody. France and I knew we could figure it out. We bought the guest ranch in Wyoming and figured if we could work hard, we would have a decent chance of making something happen.”

Some athletes find the transition away sport to a different portion of life to be rocky; Bob knew that he needed to claim and plug the space of retirement with something else that was equally productive, though he wasn’t interested in attaching himself to hockey in some other capacity.

“A lot of guys have a hard time with the leaving,” said Kudelski. “Some stay in hockey and coaching or are in the office or scouts, some stay in the game. When you left the game, you needed to figure something else out, especially back then.”

Kudelski said that his career as a professional athlete prepared him well for the role of hotelier, and he said that similarities could be drawn linking the two career choices.

There is no such thing as a sick day. I remember when someone had asked me, kind of condescendingly, ‘What makes you think you could do this?’I said, well, I stayed in a lot of hotels, and I know what people like, want, and expect.”

His philosophy as a business owner is rather direct – a simple mode of evenhandedness that should help keep the Ennis landmark sturdy and solvent.

“If there is a problem, you address it. If you make a mistake, you own up to it. Work hard. Stay honest.”