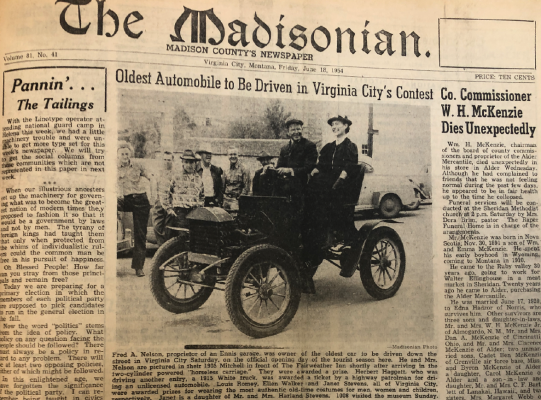 Hearing from the voices of journalism in Madison County

Sunday marked the beginning of the 79th National Newspaper Week. The focus this year is “Think F1rst, Know Your 5 Freedoms.” This is referring to the five freedoms listed in the First Amendment: freedom of press, speech, religion, assembly and to petition the government. Recent history shows many debates and dialogues concerning those freedoms, questioning the extent and scope. Not everyone agrees on who should be granted these protections and who should be refrained from access, especially in a polarized world where dichotomies are deafening.

79 years of annual celebration is a long time. That itself may show how important newspapers and free press are to this nation. And all of the argument over the five freedoms? Well, they allow us to argue.

The Madisonian has an extensive history. Editors, owners and reporters have come and gone. To honor National Newspaper Week, six people in the newspaper business have shared why they believe newspapers and journalism are important. Read on to hear their well-put answers.

“I think the most important thing a newspaper can do is to get both sides of any story and not report just what the county attorney allows them to report. (Then) they’re not able to visit with other people and see how they react to what’s going on. So I think that’s really important.

But the reason is that you have one story and you have another story and the truth is never on either side, it’s somewhere in the middle.”

“With sports writing, the perspective that I always took was nationally speaking 2% of high school athletes end up playing the game beyond high school, which is a very small number. Yet in Montana, where we live right now, you cannot find a town that doesn’t have a sports team that the community just doesn’t love. In Montana, that’s what keeps some of these small towns going. The gym is a place where people congregate in the cold of winter and they cheer on their home team, but they have great conversations about what’s going on around them. While they’re standing in line at a concession stand there’s conversations of the politics of the day: local, state and federal. Sports drive these communities.”

“I used to always tell people when I was at The Madisonian and we were going through a lot of contentious issues in the community at the time is that the newspaper is a reflection of the community. Our rule was never to try and whitewash controversy that was happening, or conversely, try to gin up controversy when there wasn’t any, but to be a reflection of the community and an accurate portrayal of what’s going on. It was my job as the editor to make sure those tensions were explained and reflected in the newspaper.”

“Journalism is important because it’s the way that we can communicate on a level playing-field. Good journalists, good journalism, helps create fair and balanced information. If journalists are doing their job, they’re trusted. They work, they build trust with the community, they use multiple sources and they help build community by making smarter, more informed readers, celebrating the great parts of community and bringing up topics that communities need to discuss and hopefully pulling interested parties together to converse, maybe even form solutions.”

“Our main goal, and our mission statement is long, was I think what every newspaper’s main goal should be, which is to inform and educate the public so they can make proper decisions. I think there was a time when some small newspapers were just focusing on ice cream socials or what’s going on at the local food bank. While that’s all important and still deserves coverage, it was very important to us to give a level of quality that people can actually trust and know what they’re voting on, know what’s going on, know what to have opinions on.”

“As far as a community standpoint goes, that’s what drives me the most. Knowing what’s going on in my community, being a part of it and helping everyone else be a part of it.”

“Everybody spends their life looking for the meaning of it all and I really do believe that the whole point of all of it is to just to connect and to feel like we belong to something bigger than ourselves. So when you’re really boiling it down, Erin and I have always had the very simple agenda of a being a conduit between things. Whether it’s we’re connecting you to entertainment, we’re connecting you to other people like you, we’re connecting you to the goings on in our area that make you enjoy your life more, it’s really never been more complicated than that.”

What is more, just about every one of these individuals gushed about their teachers and successors. Mr. Koenig labeled Mrs. Maddison as the best teacher ever. Lemon believed Leonard and Hill to be the best hires he made. The journalism and newspaper community in Madison County runs deep, is articulate and has passion for this topic in nuanced ways. National Newspaper Week is not just a celebration of physical newspapers, but one of the people involved that make the publishing, distribution and access of information possible for all.