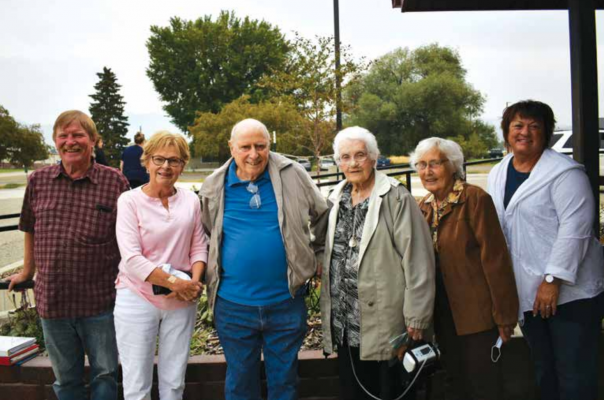 More than a spot for summer sun

Eileen Pearce, secretary of the Ruby Valley Swimming Club (RVSC) in Sheridan, moved to the area 20 years ago. In the early 2000s, she attended a pancake breakfast at the fire department and sat down next to a certain someone. “And that’s where it started,” she said of her Ruby Valley Swimming Pool (RVSP) involvement. “I came to the next meeting!”

“He came to my door! And said, Mickie we need a pool board member and I was tickled that he asked me!” Mickie Benedict, former RVSC member, said.

“These two are the pillar of our community,” Mary Pat Graham, RVSC president, said regarding Dr. Warren Swager, the certain someone alluded to above, and his wife Carol Lee.

Before ending up in Montana, Dr. Swager and Carol Lee lived in Texas where Dr. Swager worked in the public health service. He was looking to go into private practice and wrote to a handful of western states inquiring as to where there was a need for a physician. The couple hopped in their Volkswagen in 1958 and traveled to all the possibilities to figure out which place they liked the best, taking pictures along the way.

“We knew we liked Montana, you know. It was a revelation— when we got back to Seagoville (Texas), we had all the (35 mm) slides developed and approximately half the slides were of one state. And of those slides about half of them were of one town. That did it,” Dr. Swager said.

The Swagers landed in Sheridan.

Dr. Swager was the physician in Sheridan until 1986, during which he estimated delivering at least one thousand babies, while Carol Lee raised their six children. In the late sixties, Dr. Swager and a couple other folks, Art Warner and Bob Marta, felt it was a good idea to start a pool. They put together six other names to form the original corporation in 1966 and had Frank Blair, a local lawyer at the time, draw up the bylaws.

The complication, then and now, was raising money.

To do this, they went door to door trying to get people to donate. Original board members sat for a couple of hours at each house, showing the residents examples of different pools across the state. “We took the projector, slides and a flip chart and all that stuff with us,” Dr. Swager said. Some were certainly not into the idea, the anti-pool people, as Dr. Swager would call them.

He liked to mess with the anti-pool people. The first lot that was purchased for the pool on Mill Street was in an anti-pool area. Dr. Swager remembered digging on the lot just to freak out the neighbors.

On Poppleton Street where the pool would be constructed stood a dilapidated house owned by out-of-state-ers who did not want the lot to go to the pool club. To bypass that, a friend of the pool bought the lot that included the house and sold it to the pool club the next day.

John Anderson, a Sheridan rancher, was not anti-pool. He handed the door to door demonstrators a $500 check. “Back then, $500 would have bought you a ranch,” Dr. Swager said.

The pool went under construction in 1971 and the opening season was in 1974. Ever since, the RVSP has opened to provide a community gathering spot, opportunities for exercise and swimming lessons.

“I think that is one of the reasons they promoted the pool, too, was that there were a lot of deaths in this area. We have a lot of lakes and water in this area and it was important for kids to learn how to swim,” Graham said.

One particularly tragic death involved a boy named Keith Edsall going down the Ruby Dam spillway before the pool broke ground. His father joined the RVSC after this incident and was one of the ‘real movers and shakers,’ Dr. Swager said.

RVSC conducted a survey after the RVSP opened, asking high school graduates if they knew how to swim. Practically none did then, according to Dr. Swager. Today you cannot find a kid in the area who does not know how to swim, he said.

“All the realtors, when they’re selling property for people to move in and everything, they emphasize Sheridan has a pool,” he said.

“And I talked to a couple schoolteachers that said that was the one reason why they took the job was because of the pool,” Benedict said. A lot of the teachers also were lifeguards years ago.

RVSC has a hard time retaining lifeguards. Being a lifeguard used to be the summer dream, but according to those gathered eating lunch at the Sheridan Senior Center, kids want more money now.

Money, as well as lifeguard retention, remains a problem for the pool. After so many years of operation, multiple maintence updates are always needed—the building is falling apart; the boiler takes a lot of work and money to replace; before the RVSC was able to fundraise enough to acquire a pool liner, the concrete had to be repainted by volunteer hands each season; and water is now leaking out of the pool.

“We have some major expenses coming up,” Benedict said.

A parks and recreation flat tax in the Sheridan/Alder Park Recreation District allocates $25/household for things like parks, baseball fields and the pool. This flat tax requires each organization to match what they receive from the district— it does not have to be an exact match, but fundraising effort must be shown.

“Oh, that saved the pool,” Kelly Elser, Sheridan mayor from 1986-2002 and one of the originally trained lifeguards, said. “It really did because it was getting to be such a burden on the town every year. The maintence costs were going up.”

Major costs included salaries for lifeguards and managers, power bills and maintence. Elser pointed out the $40,000 it took to build the pool in the late sixties now is about the annual budget to keep it running.

Before the tax, each of the 16 years Elser was mayor the town gave money to help with pool costs. “These guys would even tell you that I was kind of a pain. I wasn’t always their best friend because we struggled to be able to give them how much money we could give them,” Elser said. Benedict remembered going to many town council meetings saying, ‘we need more money!’

Graham echoed that sentiment. We still do, she said.

Of course, as with so many other fundraising events this year, RVSP, a 501c3 nonprofit, basically lost all income they would normally gain in a fundraising season. Sheridan Days were canceled, the Sheridan Bazaar was canceled—the pool board is now waiting to see if they will be able to do their pizza fundraiser in February.

As a joke, but only barely, there was talk about putting a call to action for donations from the community in bold in this article. It is a money pit, those around the table said, but a good one.

“We always said the mothers would really complain if it shut down,” Carol Lee said.

RVSP is a community asset and a concrete example of how times change. Using grant money from Tree City USA, Elser and others planted trees around the pool. These trees were young when they first were planted and now stand tall. Boilers have gone from costing $5,000 to $15,000. Two dollars used to be enough to work as a lifeguard and the current $10/ hour rate is hardly capable of attracting youth today.

What has remained, though, is the sense of community that went into producing the pool, stemming from a desire to keep kids in the area safe.

“These are the things that make our county special,” Carol Lee said.