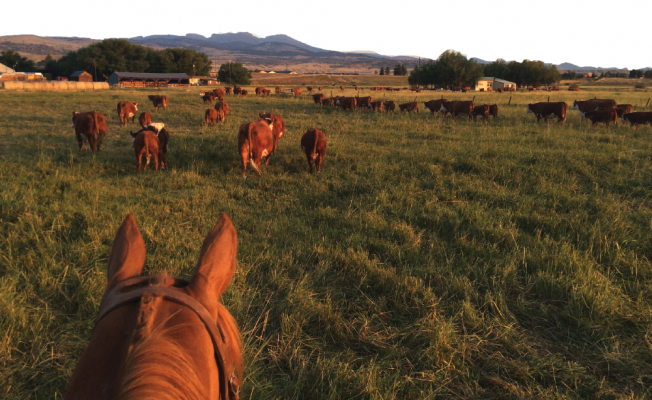 More than a job

Farmers and ranchers and mental health

Mental health affects everyone, regardless of gender or occupation. Suicide rates are higher in rural America and Montana leads the nation in number of suicides. The isolation and job factors associated with agricultural work in rural Montana, and the stigma tied to identity, makes seeking out help difficult.

Imagine you were told to write down a list of stressors stemming from your day job. Long hours, unimaginative work, tedious tasks, not getting paid enough, working below your skill level, not having enough time to spend with friends and family, fear of being judged, physical pain and lack of sleep may make the list.

For most of us, we are able to take that list and compartmentalize it into our “work box,” a figurative box where all the work stress goes so it does not seep into the rest of life when we clock out, or when 5 p.m. hits. Agricultural workers do not get the luxury of having a “work box.”

“It’s one of the only jobs in the world where it’s their whole lifestyle,” Ke’Lah Savage, MSW, LCSW, chair of the Mental Health Council in Madison County and practitioner at Peak Mental Health in Twin Bridges, said. Not only that, but it is a job based on forces the workers cannot control. “As a person involved in agriculture, whether you’re a rancher or a farmer, you’re at the mercy of two things: mother nature and the markets,” Rachel Endecott said.

Endecott is part of a cow-calf operation outside of Ennis. The ranch is a family affair as her mother, Jane, mother’s brother and sister, Pat and Betty Goggins, uncle’s wife, Michelle Goggins and mother’s mother, Cora Goggins, are all involved. Despite this, there is a feeling of disconnect. “A lot of what we do is fairly solitary. It’s certainly often going be the same, small group of people you work with each day for the most part,” she said.

“When you’re in rural America, you’re isolated. You’re set on a tractor for 10, 14 hours a day and think about all the things going wrong with your life. It can screw with your head,” Sen. Jon Tester said during a press phone call on Sept. 25.

“I feel like one of the real roots of depression is isolation,” Amanda Morrison, LCPC, LAC with mental health practices in Ennis and Bozeman, commented. Linking depression and isolation provides a window through which to view the baggage agricultural workers carry.

An early winter storm is forecasted. Summer turns into drought season. Products are not yielding the same amount of capital as before. This stress digs a deeper hole and leads to an advanced feeling of isolation. Prickles of fear start to pop up, maybe accompanying the already present beads of sweat. But this does not have to happen.

“We can get some support before we’re in a crisis,” Savage said, explaining how symptoms can manifest physically once harbored for too long. Anxiety and fear about mortgages or the early storm can present themselves as headaches or neck pain. Savage believes if mental stressors associated with these pains were addressed first, the following physical side-effects may never come to fruition.

On the other side, Morrison advocates for medical doctor appointments before seeking counseling in some cases. Maybe it is just a vitamin D deficiency or a diet change needs to be made.

Either way, Savage points out a good question. “When does a farmer or rancher get time off to get some help?” The entire process of going to a counseling appointment could take as long as three hours, including drive and appointment time depending on where the farmer lived. Would that “wasted” time not lend itself to more stress?

The brain has a lot to do with how the body reacts to stress, Savage explained. The nervous system triggers a response in the body when stress is approaching that the brain may perceive as fear. When all these fearful, pending questions start popping up, if sitting alone on a tractor, they can seem terrifying. “That isolation piece is a huge factor in Montana, being that we are number one in the nation for suicides,” Savage pointed out.

Suicide is 45% greater in rural America. During the Sept. 25 press call, Sen. Tester presented his Seeding Rural Resilience Act, the primary focus being agricultural workers’ well-being. “This legislation is a strong step towards addressing this crisis. There is no silver bullet, but my bill provides better tools and resources for folks in rural communicates to manage and reduce the stress that comes with this line of work,” Sen. Tester said.

The Seeding Rural Resilience Act would be a big step and has a few more to go through before implementation. Currently, Madison Valley Medical Center (MVMC) provides TelePsych options for patients as a more private and convenient option. A practitioner from Billings provides TelePsych care for a couple hours each week that people sign up for like they would a regular doctor’s appointment. Patient and psychiatrist talk through a Skype connection and chat via a TV screen. Appointments range from 30-45 minutes. “I think it’s a real team approach to mental health,” Maura Davenport, M.D., Family Medicine, said.

Back to the isolation factor, perhaps the most important thing to remember is mental stress does not discriminate. Everyone has a brain and a nervous system that takes stress and turns it into fear. It is not a condition specific to anyone. “One of my goals in mental health in general is to normalize some of it,” Savage said to this point.

Making mental health conversations part of the vernacular has the potential to carry that sentiment forward. Endecott mentioned the perception that it is easier for women to talk about mental health than men, but she pointed out it is primarily personality driven. Regardless of gender, it is hard to ask for help. Hard whether you are a rancher, plumber, writer, musician, tennis player, architect, or IT worker.

“Farmers are fiercely independent and they don’t want to come crying on my shoulder. That’s not what farmers do, that’s not what I do, that’s not what happens,” Sen. Tester said, explaining why he has not heard from farmers individually about the mental stress they experience. He went on to say he normally does not hear anything until it is in an obituary in the newspaper.

“From a mental health aspect, our culture is very independent and you want to be tough and you don’t want to let things bother you. You just kind of suck it up and make things work, but mental health is a seriously huge challenge in the agriculture industry, and something we need to pay attention to,” Endecott said.

“I think they’re the hardest population to get into counseling because of the stigma, but I’m feeling like that’s changing with the younger generation,” Morrison said. The idea of ‘cowboying up’ rings a bit louder in the agricultural community. “As we’re talking about mental health more, some of that stigma is going away. It’s just really slow in rural communities,” Davenport said.

“I just think it’s an area that we need to support. They support us and we need to find a way to support them as well,” Savage said.

Endecott laughed when asked if she has a relaxation or wind-down strategy. Those in her family are big list makers and when things start to feel too big, she breaks them down into partitioned items, asking questions like, “how much can I do in an hour?” “What can I reasonably accomplish in two?”

“Ranching is sort of the way I relax,” she said, bringing the fact that agricultural work is more of a lifestyle than a job full-circle.