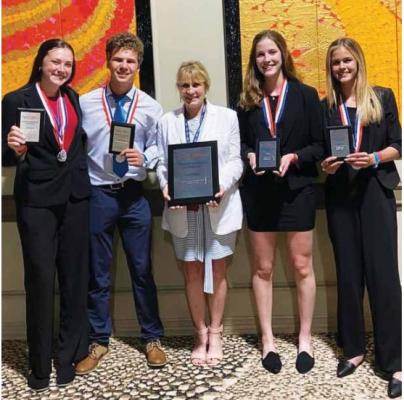 “Twin Bridges BPA just returned home from the National BPA Leadership Conference in Dallas, Texas with a National Championship in Broadcast News team. We feel like Rich Strike at the Kentucky Derby– a small rural school in Montana defied the odds and overcame equipment difficulties, kept their composure and surged at the finish line to win,” commented BPA advisor, Jody Sandru.

The Broadcast News Team won State and advanced to Nationals. The team created a five minute news broadcast containing two stories. One story focused on our Twin Bridges BPA chapter trick or treating for the local food pantry and the second story focused on the national unemployment issue and how it is affecting rural America. The news segment was presubmitted and received a technical score. At Nationals the team presented to judges and answered questions. After the first round, the 12 finalists were revealed and Twin Bridges High School made it to round two.

“For the finals round, we had to be in the Governor’s Ballroom at 7 a.m. with all the equipment to produce a live broadcast news video. There was a three-hour time limit to create and export our news segment.

The prompt was handed to all the teams at 7 a.m. and was ‘The sights and sounds of Dallas’.

The team decided to base our video from a small-town student’s perspective.

We delegated assignments to each member of the team and I was in charge of filming B roll. We started out by going around the hotel and finding places to film, get B roll, and find students to interview.

There were 10 minutes left and I had to take my shoes off and sprint across the hotel to get an important shot we needed to finish the broadcast,” said Emma Konen.

Ruby Waller commented on a last minute technical hurdle the team had to overcome, “We started to edit on our laptop and inserted the provided flash drive and our computer crashed. We ran to our room to grab a different laptop but it did not have Adobe Premiere. We were stuck with a 12 year old laptop that ran like molasses in January.

The commitment and donations from our community was the inspiration to keep going in spite of our technology challenges. After all, why would we make it this far just to give up?

We knew time was of the essence and miraculously with 20 minutes left the laptop started to work.

Everyone was on deck trying to compile a story working as a team. We were all so defeated by our equipment failures, but we knew we needed to submit something.

In the knick of time our export was completed and we ran the flash drive to the judge.”

Sandru was waiting in her room as advisors can have no contact with the team during finals. Shortly after 10 Ruby walked in and fell apart because she knew they could make an amazing story, but equipment failure plagued the team’s mission.

“We regrouped and realized that sometimes bad luck happens, but I told the team they were champions in every sense of the word because they fought til the very end,” wrote Sandru. Awards

“On Saturday night we attended the final awards ceremony and it felt like rubbing salt in a fresh wound because thousands of kids had a fair chance of winning their competition and we couldn’t help but feel robbed of the same opportunity.

Since we made the top twelve we knew we would be called to the stage to receive a medal. We were on the stage and as the places were called I was thinking, ‘get me off this stage.’

When first place was called and we heard Sam Konen, Callie Kaisew, Ruby Waller and Emma Konen it was utter disbelief!

Our Montana grit paid off and we are so grateful to bring back our national championship to the community that made it all possible,” said Waller.