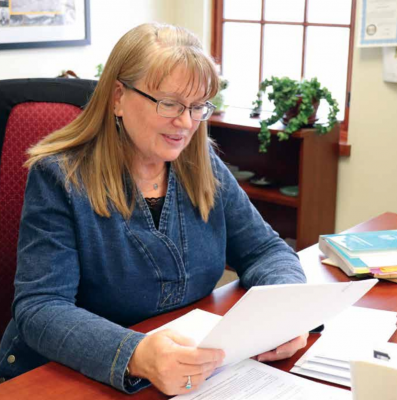 Madison County Clerk and Recorder Paula McKenzie may be new to the position, but by no means is she new to the office.

McKenzie started at the Clerk and Recorders office in 2007 and has been there ever since. So, when former Clerk and Recorder Kathleen Mumme retired, you could say McKenzie, as chief deputy clerk and recorder, was a shoo-in for the head role.

“I definitely had a good understanding of the position, it’ll still be a bit of a learning experience for me, but I have a pretty good grasp of what’s going on,” said McKenzie, who took her office’s lead on January 4.

A clerk and recorder wears many hats. McKenzie said the largest facet of her position is handling land records – deeds, mortgages, surveys as well as road information. She also manages birth and death records and certificates, recording county meeting minutes, resolutions and ordinances, as well as maintaining voter registration and managing elections.

Speaking of elections, this November her office facilitated a “wild one,” as she called it, garnering the biggest voter turnout in Madison County history – 94%.

Between Covid prompting 100% mailed ballots to the overarching drama of the election itself, “It gets a little dicey trying to deal with everybody’s opinion,” said McKenzie, “but you have to just let them have one. We can’t voice our opinion when we’re working, so we just work the election and let everybody come in and say what they want to say.”

Voter trust issues surrounding the mail-in process also presented a challenge in the 2020 election. McKenzie noted that prior to the pandemic’s prompt to mail all ballots, well over half of Madison County ballots were already handled that way via the absentee program.

McKenzie said her office likes the mail-in process. “But people have a lot of misconceptions about mail ballot elections, in Montana especially,” she said. “I can’t talk about other states, but Montana has a great mail ballot system. We in our office don’t feel worried about it in the least.”

As it played out, a majority of Madison County residents received their ballot and mailed it in with no fanfare. There were a few that didn’t trust the approach, McKenzie explained, and opted to drop their ballot off in person. “I don’t think people realized how hard it was on us to have people be so down on the process,” she said with a sigh. “Because we take it personally. We go to such great lengths to make everything safe and just the way it’s supposed to be, and then we had people come in asking ‘Now, are you sure this is going to get counted?’ It’s hurtful.”

Working in the office for 14 years, McKenzie has found many highlights to her job. Helping people sort through genealogy was the first that came to mind. “It’s really interesting,” said McKenzie, who also shares a long background here. “A lot of people come in the office in the summer to learn about their heritage here in Madison County. That’s probably the most fun thing, helping them learn about their origins,” she said.

Madison County, Sheridan specifically, has always been a true home for McKenzie. She can trace her heritage back to the Bielers – German immigrants who helped establish Sheridan. Both her parents were born and raised in that town.

In fact, she isn’t even the first in her family to work for the county – her paternal grandfather served as Madison County Commissioner until his passing. She now lives in the same home her great-grandparents, grandparents and mother lived in before her.

McKenzie's Madison County ties continue – her grandmother Ruth Shafer Bieler served as superintendent of schools in Madison County, and Ruth’s grandmother, Jane Ritchie Fairweather Davis, was William “Bill” Fairweather’s sister. That name might ring a bell for many – Bill is well-known for his pivotal role in discovering gold in Alder Gulch.

McKenzie’s father served in the Air Force, so she was born elsewhere, but her family would always return to Montana in the summers to visit family. In 1979 after graduating high school in Maryland, she quickly made her way back to her family’s homeland, and has been here ever since.

She spent her first years in Montana helping her aunt and uncle Braach on their Sheridan ranch, doing everything from irrigating, haying, to watching kids and cooking and cleaning. Nowadays, she’s happy to be settled in her ancestral home of Sheridan and working a multi-faceted job she continues to enjoy.

“Because I have such a past here in Madison County, it’s nice to see all the family names when I look through the old documents,” McKenzie said, regarding her appreciation for her career. “I had not even known that my grandfather was a commissioner until I came across his name in paperwork. It’s all the family roots, and liking the area, wanting to stay here. It’s a wonderful job for someone in this area. It’s just interesting, interesting work.”