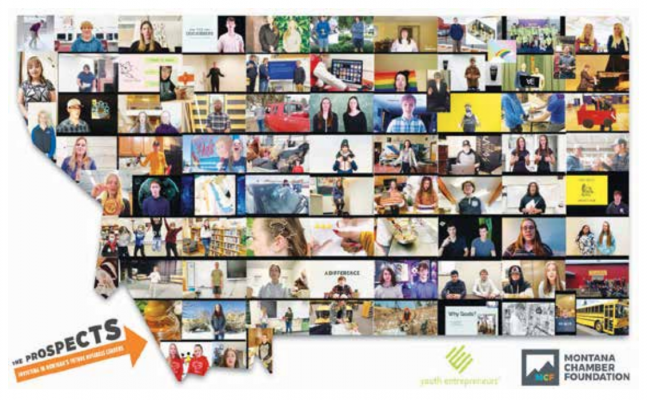 Tue, 03/23/2021 - 4:54pm
By
Keely Larson
connect@madisoniannews.com
“Entrepreneurs. They’re in every little nook and cranny in our state and as a teacher, you just have to draw it out of them so they can see their potential,” Ms. Sandru said.

A person can get stuck in the mentality that if you grow up in a small area, you won’t have the same opportunities as others living in cities or metropolitan places. It can feel like the success of whatever it is you are trying to succeed in is based on location, not ability or passion.

Really, the size of the area doesn’t matter. It is the mentors and educators that foster passion and creativity in small school districts that define success.

On April 12, sponsored by the Montana Chamber of Commerce and Youth Entrepreneurs, The Prospects competition hosted a virtual award show. Gov. Greg Gianforte was the keynote speaker and finalists from across the state watched from their devices, waiting to see which students would place or receive honorable mentions in the business pitch competition with categories ranging from new business, existing business and this year, a Covid-inspired business idea.

“What problem are you going to solve?” was the prompt Ms. Howser gave to her students as they formulated their ideas. Entrants had to write a 1,000- word maximum business proposal and create a two-minute project pitch video to submit to Prospects.

Nate’s pitch was a Bluetooth connected mat heater designed to be placed on top of a windshield to de-ice the windshield while you stay inside. She called it the Windshield Warmer.

“I know some people who went out and started their cars and slipped on the ice, and (it was) just one of those things I thought I could come up with a solution to help prevent,” Nate said.

She started working on the submission in November and her thoughtfulness and passion paid off. Nate placed first out of 93 different project entries in The Prospects competition for the new business category.

“They really liked her description and the problem that she was solving and thought that it was very relevant,” Ms. Howser said. “Her main target market was elderly people who risk falling as they walk back and forth to their vehicle in the morning to de-ice their windshield.”

After the announcement, another team that submitted offered to help Nate with the technical side of developing the Windshield Warmer if she wanted to actually carry it out.

“I think I’ll just see where life takes me right now. I’m probably just going to focus on getting through high school,” Nate said regarding her plans on developing the product. If an opportunity presented itself, she said, she would probably jump on it.

Nate plans to attend Montana State University when she graduates, where she was awarded a $1,000 scholarship for her first place in The Prospects, to study accounting. She also received a $5,000 cash prize.

In addition to Nate’s firstplace, Twin Bridges students placed in a variety of categories and received honorable mentions as well.

The Ruby Valley Tech Trainers—Zeke Redfield and Ian Frederick—focused on helping elderly residents with technology and took second place in the existing business category; Organize, Recycle and Repurpose (ORE)—Allie Dale and Emma Konen—took third place in the existing business category for cleaning teachers’ rooms with a recycling and repurposing-inspired motivation.

“Entrepreneurs. They’re in every little nook and cranny in our state and as a teacher, you just have to draw it out of them so they can see their potential,” Ms. Sandru said.

The focus of this competition summed up Ms. Sandru’s teaching methodology, something she really keyed into after attending a workshop a few years back. In essence, the workshop stressed teaching students to be book smart, but also life smart. “It was like learning the way it should be,” Ms. Sandru said about The Projects layout.

“Every single subject, every single student needs to have this mindset to be successful in life,” she said. She encouraged her Prospects applicants to come up with ideas that could benefit the Twin Bridges community.

“You should have seen my room. They were just alive, like a little beehive,” Ms. Sandru gushed.

The in-room condition expired rapidly as all but two of her students ended up quarantined right after they started their projects. To keep things in motion, Ms. Sandru came into the school on a Saturday to send her students all their video footage so they could put everything together at home themselves. “Every last one of them did it for me,” Ms. Sandru said.

“One of these days, we’re going to have a cheesecake party,” she laughed.