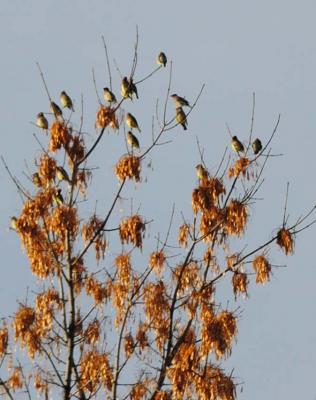 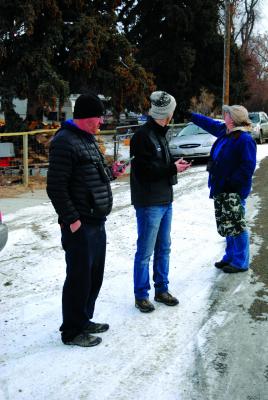 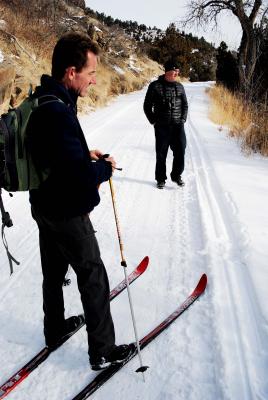 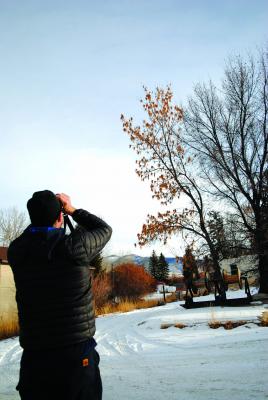 Counting birds by species a fun way to spend a Saturday

SHERIDAN – If the good citizens of Sheridan were wondering what a quintet of strangers with binoculars – one with a camera – were doing roaming around town early Saturday morning, January 5, the answer is counting birds.

Sheridan was part of the Ruby Valley’s third annual Christmas Bird Count (CBC), which took place Saturday, January 5. The five people wandering around town were counting the number of birds they saw of each species; everything from big birds like wild turkeys and eagles, all the way down to the tiny house sparrows that flocked around backyard bird feeders.

The CBC is basically an early-winter bird census. It’s called the Christmas Bird Count because it takes place annually around Christmas and New Year’s. This year’s census dates, for example, were Friday, December 14, 2018 through Saturday, January 5, 2019.

That’s when thousands of volunteers in the U.S., Canada and several other Western Hemisphere nations participated in the census.

The object of the CBC is to measure bird populations, to tally the number of birds for each particular species seen or heard on that particular day. For example, in 2017, the Ruby Valley CBC tallied 101 ravens, 111 black-capped chickadees and four American dippers.

Each CBC takes place within an established 15-mile diameter circle, and is organized by a count compiler. Count volunteers follow specific routes through the circle, counting every bird they see or hear.

The Ruby Valley CBC was part of a larger effort across Madison County: Ennis did a CBC on December 19. Three Forks had one on December 26. Over in Gallatin County, Yellowstone National Park’s CBC took place on December 23, and West Yellowstone’s happened on December 30.

The CBC has been conducted for 119 years by the National Audubon Society. Its roots come from a 19th century tradition known as the Christmas side hunt, where gunners would choose up teams and go afield, whoever brought home the most game (fur or feathered) won.

On that first CBC, 27 birdwatchers conducted 25 CBCs. Most were near East Coast cities, north of the Mason-Dixon Line, but others took place from Toronto, Ontario to  Pacific Grove, California. That original CBC tallied 90 species across all 25 counts combined.

Since then the CBC has grown tremendously, with CBC circles covering almost all of North America.

For Sheridan’s count, about 30 people – none of them looking like birdwatcher Miss Jane from “The Beverly Hillbillies,” bedecked in safari gear – gathered for some wonderful breakfasts and route coordination at Fritts Dream Bean Café in downtown Sheridan.

Tom Forwood, Jr., of Willow Valley, and Andrew Guttenberg, of Bozeman, ramrodded the routes and would compile the information gathered by the counters. Some counters were sent on specific auto routes up the drainages surrounding Sheridan. Two counters intended to cross-country ski the route and count birds. Others would walk and count.

After sending all of the other counters on their routes, Forwood, Guttenberg, Brad Barth, also of Bozeman, and Nancy Whiting walked the downtown Sheridan route.

Forwood led the team first south of town, towards the ball diamond, spotting ravens, house finches, magpies and robins. West of the ball diamond, along the railroad tracks, several bald eagles, mallard ducks, some geese and other songbirds were spotted.

As team members spotted birds, they counted them and marked the species seen. Guttenberg kept the tallies on his cell phone, and as each segment of the route was completed, Guttenberg “dumped” his data into Forwood’s phone, where a cumulative total of numbers and species were kept. Keeping up with these experienced birders was no easy chore. They spotted birds and recognized the species very quickly, binoculars or not.

Forwood, who helped instigate the Ruby Valley count, laid out the routes to incorporate the surprising variety of bird habitats available in Sheridan, including  wetlands (still open despite the cold weather), brushy fields, agricultural areas, deciduous riparian zones along the creek and urban habitats with ornamental trees and backyard bird feeders. Each of these had different species of birds. For example, many cedar waxwings and robins were seen in the urban settings, feasting on mountain ash berries and crabapples.

Later, the route took the quintet up along Mill Creek, up to the base of the Tobacco Roots, and into more habitats. Here, the team spotted droves of Townsend’s solitaires, mountain chickadees, several Clark’s nutcrackers, and even a loggerhead shrike. They hoped to spot a dipper, a robin-sized bird that haunts creeks and eats aquatic insects and vegetation, but this search didn’t pan out.

While Forwood and Guttenburg returned to town to run another segment of the route, Barth cross-country skied further up the Mill Creek Valley to count birds into the mountains.

Forwood said he got into birding via his earlier love of herpetology (the study of  amphibians (frogs, toads, salamanders, etc.) and reptiles (snakes, lizards, turtles, etc.), and his father. His passion for fly-fishing sparked a lot of this, he said. When first began birding, he wasn’t too good at it. So he studied, and things kind of snowballed from there, he said, with birding becoming an “obsession.”

Guttenberg said his interest in hunting and the outdoors led him into birding.

By about 5 p.m., with all of the routes run, the counters returned to the Ruby Valley Brew to compile all of the results from the counts.

Robin and Richard Wolcott – currently from Bozeman, but former Alder residents –participated in both the Sheridan and Ennis CBC counts.

They also served as compilers for the individual tallies in the Ennis CBC, which included the town of Ennis, Ennis Lake, Norris Hill, Meadow Creek and Jack Creek.

The Ennis count goes back to 1958, when Dr. P.D. Skaar and Homer Metcalf started doing the counts. In 1977’s CBC, Ed Harper traveled from California to participate in the 20th annual Ennis CBC, held on December 30. A dozen participants counted a record-setting 55 species, which included the first sightings of house finches, a species that has been observed every year since.

Blessed with good weather, temperatures in the low to mid-30s, and light breezes mixed with snow showers and sunshine, the Ennis CBC recorded a large number of Trumpeter Swans and a Canyon Wren, located for only the second time.

In addition to the birds, counters saw many deer, pronghorns, hundreds of elk on the bench and a mountain goat and young moose up Jack Creek.