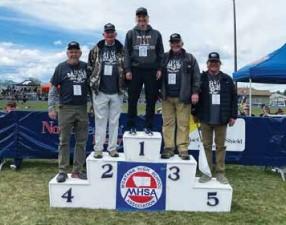 For the love of the sport

Over memorial Day weekend a group of five ennis volunteers helped to run the montana state track and field finals for Class AA and Class A. Although this group varies in age and background they share one thing in common, a love for track and field.

Kerry Koenig, Ray shaw, Julie Kieckbusch, Dave marsh and Kelly elser all pitched in to make sure things ran smoothly at the state finals in Butte.

Some of the volunteers have been helping run montana track meets for decades, including the 12C meets for our very own Madison County schools.

For Kerry Koenig, it’s a simple love of the atmosphere that keeps bringing him back.

“I love it because I get to be around the track kids and coaches… it’s a really close knit group and I love being a part of that community,” Koenig said.

Throughout the weekend the group helped set up for events and officiated many of them as well.

The importance of giving back cannot be understated. events such as these could not be possible without the help of these volunteers.

“When i started out years ago, the veteran coaches helped me, and through the years i’ve tried to pay that forward by helping,” Koenig said.

The state finals itself brought representatives from all 16 Class AA schools and 23 Class A schools from across the state. many of the best young athletes in the state of montana were on display.