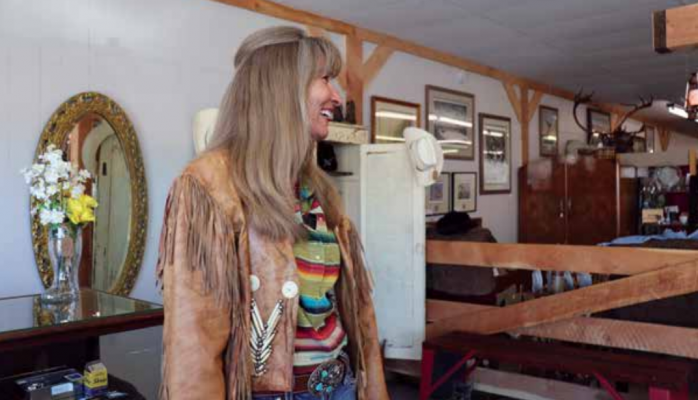 A little bit of everything

Tue, 06/15/2021 - 4:29pm
By
Jolene Palmer
news@madisoniannews.com
“That’s what I love about this business, it’s a little bit eclectic, a little bit of everything,” said Roxy Hudak, owner of Red Mountain Mercantile.

There’s a place Roxy Hudak goes when she needs a break from it all. It’s called her Woosah room – a place for clarity and calmness. Some folks find this place along the river, or perhaps in their garden. For Hudak, the room decorated with mementos of home and family, happens to be in the back of her new shop:

Red Mountain Mercantile in Ennis. Red Mountain Mercantile is a dream of Hudaks’s long in the making. She said she’s been a lover of antiques since she was a teenager and has bought and sold these unique treasures for years. Auctions, buying, selling, refurbishing, you name it, she’s into it. Hudak hasn’t, however, had a storefront of her own.

Until now. That dream finally came true earlier this month when Red Mountain Mercantile opened its doors, filling the space left behind after the previous store, Buckboard Mercantile, closed over a year ago. Eight months of renovation, and the store finally opened to the public on June 1.

Hudak hails from Minnesota where she first found her passion for antiques. The passed on that love to her youngest son Kohlmen at a four-story antique mall owned by one of her protégés, Dianne Rollie, at a place called Mulberry Point Antiques. There she sold her finds and Kohl ran up and down the flights of stairs helping shoppers with their finds. That earned Kohl the name “Skippy,” since he was always skipping off to somewhere at the mall.

It really was a family affair. Back then, Hudak would fill her van with her four kids and hit the road on buying trips, visiting farm auctions and making memories along the way. Over the years jobs with the Department of Natural Resources in northern Minnesota, Fish, Wildlife and Parks in Ennis and with an outfitter in Great Falls kept Hudak employed but antiquing always remained.

Now, Hudak has a store of her own where she and like-minded collectors can peddle their oft one-of-a-kind wares. That includes everything from primitive furniture to cowboy boots, art, glassware and so much more.

“That’s what I love about this business, it’s a little bit eclectic, a little bit of everything,” said Hudak, standing in front of a photograph of a mountain bathed in red. It’s a photo she took from her deck of the peak many know as Sphinx Mountain, though she learned its name as Red Mountain. “I just love being around people, and I love learning constantly, you’ll never know it all when it comes to this type of stuff.”

Hearing her customers’ stories is also a highlight of the business. Folks often come in to find something they just can’t leave without, but recently a customer’s experience brought both she and Hudak to tears. The woman was perusing the booths and came upon a doll that instantly transported to her childhood. It was seemingly the same one she and her sister both had growing up, though hers had been lost in the shuffle of time. But there it was – that very specific doll related to her family’s business – just waiting for her, states away, in Ennis.

“She was in tears when she left, but they were great tears,” Hudak recalled. “I turn into a puddle sometimes when I listen to some of the stories.”

You never know what you’ll find at the mercantile. One item owned by Hudak and showcased at the front of the store isn’t for sale but is certainly worth a look. It’s a castle made of colorful polished stones, crafted in the 1970’s by Dillon resident Steve Logan over the course his 10-year sentence for murder. Some claim Logan fired the shot in self-defense. Whatever the case, the time he spent resulted in quite the unique conversation piece.

As for what’s up for sale, it’s best to experience the ever-changing array first-hand.