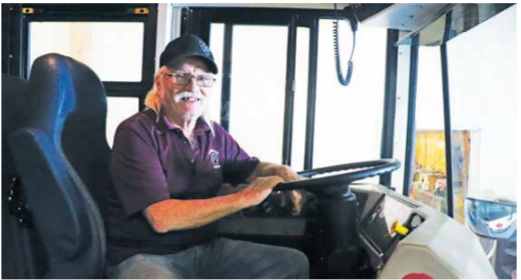 S heridan School District Lead Bus Driver Dave Gators estimates, in the 12 years he’s been transporting students to and fro, he’s accumulated around 132,000 miles of travel – not including extracurriculars, sports and the lengthy excursions to far away locales like Denver, Seattle and Salt Lake. (Fun fact – that many miles could get you more than halfway to the moon, or more than five times around the circumference of the Earth.)

His route mileage is a number Gators offers up with a grin, explaining that driving bus is a job he truly enjoys. His day starts around 6 a.m., getting the buses up and running before heading out for his 30-mile route which includes Tuke Lane, Mill Creek and Wisconsin Creek. His midday is filled with maintenance and cleaning, and the workday ends at around 5:30 p.m.

It can be a long, and sometimes challenging day, but Gators said it’s never been the kids that give him guff. Just recently it was the wind that caused some trouble, knocking down two trees onto Wisconsin Creek that Gators had to pull off the roadway so he could make his pickups. Snow drifts are another common nemesis, so is the mud. Fortunately, area ranchers are willing and able to assist when the need arises.

“I just like being around the kids, it makes you feel younger, it seems,” Gators said when asked what keeps him coming back every school year. That youthful energy translates into his goofy nickname, “Whitesnake,” which was given to him by a student the first year Gators took the Sheridan bus wheel. The student, who likely had no idea Whitesnake is also a hair band, thought the name was fitting due to Gators’ long, snow-white locks.

“Kids are gonna be kids,” Gators said, chuckling at the memory. “To me, every day is a good memory. There’s always something going on with the little kids, I pick on them, I tease them, and the teachers always tell me not to get them started, but I do anyway, just have fun with them.”

Gators originally hails from Nashville, accent still intact. He and his wife Dallas relocated to Madison County 13 years ago when Dallas took a lab tech position at the Ruby Valley Medical Center. Gators, who had recently retired after 14 years of building dairies for South Dakota farms, ran across a help wanted sign hung at the post office – Sheridan was looking for a bus driver. Beyond the dairy business Gators had driven a school bus in Nebraska for seven years as well as for Omaha for six years, so he was a shoo-in for the job.

Before this school year, Sheridan had been lucky to say it wasn’t affected much by the nationally felt bus driver shortage. Gators said that currently, he could use another sub driver, and ultimately, another full time lead bus driver.

The parttime, split shift nature of the bus driving career makes it a tough sell, Gators admitted. He thinks it’s first and foremost a job for someone who loves being in the company of kids. The position, he said, would be a great fit for a recently retired community member looking to provide a much-needed service to families.

“You’re not going to get rich doing it, but that’s not what it’s about to me,” Gators said. “It’s about the kids. I just enjoy it.”

Gators noted that if there is anyone on the fence about signing up, now would be the time. Not just for the immediate need, but because starting in mid-February a new law goes into effect that requires drivers to attend a special training school that would take several weeks to complete and will come at a substantial cost to schools.

Gators turns 74 in February. October 2022 will mark the end of his career as Sheridan bus driver. He always said when he got to a certain age, he would call it quits, readily admitting someone in their 70s must deal with eyesight issues, slower reactions and the like.

“I’ve done this for a lot of years, I’ve never hurt a kid, and I ain’t gonna start now,” Gators said of his upcoming retirement from a career he loves. While Gators will certainly miss his time with the kids and behind the wheel, he said he’s looking forward to retirement. The plan is to stick around the Sheridan area, and while he may not be driving bus, he’ll continue putting in the miles another way. This time, on a Harley alongside Dallas.

Kids will also remain in the picture – retirement means Gators will have more time to spend some with his family: kids, grandkids, great-grandkids and all.