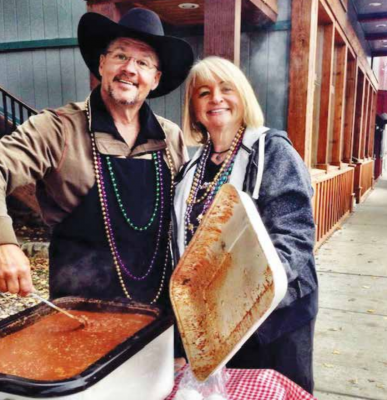 The Louisiana spice of the Hunter’s Feed

The Ennis’ Hunter’s Feed lost its Louisiana flavor this year.

Kenny Joffrion, known as “Kajun Kenny,” spent a decade driving to Ennis with coolers filled with meat and seafood from Geismar, Louisiana every year for the Hunter’s Feed. He fed his Madison County friends and the community classic Creole dishes like jambalaya and fried catfish. One year, he brought a bacon wrapped alligator with a whole chicken hanging out of its mouth. Kajun Kenny died after battling cancer for several years May 18.

“He always had frozen junk in his trunk,” Vicki Amussen said. “He was very generous.”

Kajun Kenny drove to cook in hunting camps and communities, from Louisiana to Alaska. He harvested a bull elk in Madison County one year, but mostly traveled to cook for old and new friends, family and to laugh with others around a heap of jambalaya.

“He’s one of the funniest people I ever met,” Tanya Matson said. “He’d always cook enough food for 30 people and there would be six of us there for dinner.”

Amussen met Kajun Kenny through friends like Matson and Mike McCan, who live in the Ennis-Big Sky Airport community. He stayed at friends’ houses out there, cooking meals and telling stories about life in Louisiana.

“Kenny loved to cook for people,” Amussen said. “He’d tell great stories at night that I’d just shake my head to. Stories about catching alligators and turtles in the swamp.”

About nine years ago, Kajun Kenny knocked on the Matsons’ door to ask a question. The stranger from the south invited them to his friends’ airplane hangar for a dinner party that night.

“Anybody he talked to, he’d become a friend to,” Matson said.

Every year, the Friday before opening rifle season, hunters and food enthusiasts take to Main Street in Ennis with steaming crockpots of wild game recipes. The tradition of a town cookoff to make room for anticipated new cuts from a successful hunting season is 35 years old. Recipes with last year’s meat are sampled and voted on.

Green, purple and gold beads always hung from Kajun Kenny’s neck as he served food from a deep crock pot or giant kettle on Ennis’ Main Street. He served samples of his Creole -style wild game dishes with a side of Mardi Gras beads.

Kajun Kenny came through Oklahoma to get to Ennis. He stopped in Owasso, Oklahoma, each time to grab several jars of spicy, sweet, garlic and dill pickles from the Atwoods Ranch and Home. They were a favorite of his friends in Madison County.

“I still have a jar in the refrigerator,” Amussen said. “I think I’ll keep them in there so, I think of him every time I open it.”

Along with pickles and beads, Kajun Kenny always brought Bayou spoons for his friends, in case they ever wanted to cook jambalaya when he was not around. The flat, wooden spoons are used to stir classic Creole dishes like jambalaya and gumbo.

Kajun Kenny would cook up other swamp cuisine in Ennis too, like fried frog legs, gumbo, turtle soup and chunks of alligator. He dished out leftovers in take-home containers after dinner parties and surprised friends’ freezers with leftover jambalaya.

“A couple of years ago, he brought a huge cast iron, like a caldron,” Matson said. “The next day we had six, two-gallon bags of frozen jambalaya in a cooler outside our door to feed our family through winter.”

Even when Kajun Kenny was not in Ennis, he was thinking of his Madison County friends. Packages would arrive with Mardi Gras beads when the New Orleans Saints were in the playoffs. He often followed up a conversation after leaving Ennis with a package referencing a talked-about-detail.

“He got me weird earrings,” Matson said. “You know, so I could look Cajun too.”

According to some of Kajun Kenny’s Madison County friends, one of his sons had planned to come to the Hunter’s Feed this year to see what his father had been a part of all these years. But due to the coronavirus, the 2020 Hunter’s Feed was canceled. His friends hope to honor Kajun Kenny at next year’s Hunter’s Feed.

Kajun Kenny died at home with his family among their pecan orchard in Geismar, Louisiana