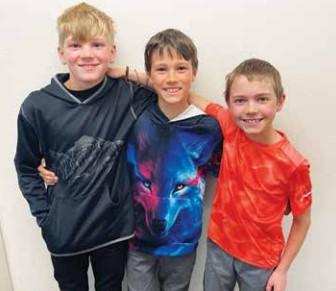 It started out as a busIness proposItIon

But ended up meaning so much more

On Monday, april 4th, Keyser edwards and sawyer Garland decided to start a business by making paracord bracelets. anyone can assume they were both very eager to make some spending money. However, the next day at school their teacher, Mrs. Brozovich, passed out a flier for ‘hat’ day, for a family that was in need. it was then that Keyser decided they would make these bracelets, sell them, and donate the money to this particular family. That day Keyser asked Kolby Marsh if he would like to walk around Jeffers selling bracelets. Kolby was eager to help. The boys made a goal of $100 dollars, but it didn’t take them long to reach that goal. By Thursday they set a new goal of $200 and all three boys: Keyser, Sawyer, and Kolby, walked around ennis to sell more bracelets for the family in need. By that evening they raised $400 dollars! This act of kindness inspired the rest of the 4th grade class to bring in more than the $1 donation. Many students brought in money from their own stash, not their parents’, to give to this family.

“it just felt so good handing the money over to that family.”

“it was so cool, but a lot of credit goes to Keyser. He’s the one who made most of the bracelets.”

“I wanted to help raise the money for the family “

Whitney Marsh, Kolby’s mother, said of this experience, “The boys truly enjoyed the time they got to spend together, and it was for a great cause. all of us moms are very proud.”

Nicole Edwards, Keyser’s mother, said of the boys and their project, “We are proud of their beautiful hearts and enthusiasm to help a family in need. i love that they quadrupled their original goal of $100.”

Sara Garland, sawyer’s mother, said, “These guys rocked it, but Keyser was the push and bracelet maker for the most part. This was a super cool, awesome project."