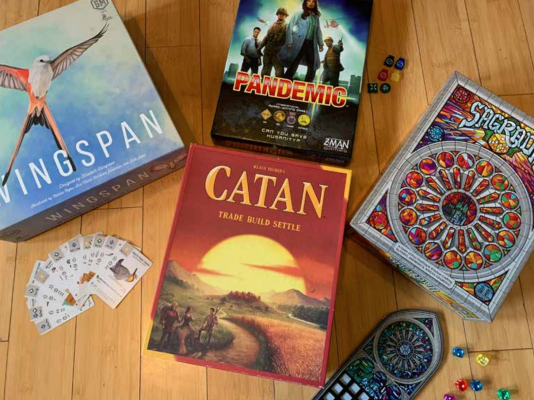 How to spruce up your small gatherings and family holidays

Game nights, for the win

One thing that is easy to do in a small group, and almost preferable, is playing a game. There are so many tabletop options anymore, even those ‘not-super-into-games’ people can find something they like.

Game nights—with family or those you are living through the pandemic with, or through any virtual platform—provide the type of connection we find ourselves missing, especially as the holidays come around. They can be safe, silly, a needed distraction and a way to make memories that is difficult to do while watching T.V.

“They bring people together. They’re a good thing to just enjoy with other people,” Eric Ottey at the Great Rocky Mountain Toy Company in Bozeman said.

Unless you are playing Monopoly. Maybe skip that one during a stressful pandemic.

These games may take a masked trip to the store or an online purchase, but they are worth it. They could also serve as a great gift idea, especially if you are able to find them at a local gift shop or game store.

Wingspan is one of those games that you start describing to people enthusiastically because you have already played it and loved it but end up sounding like a maniac. It is a card and dice board game that exercises your strategy muscle. Each card has a bird assigned to it that includes a point value, a cost, an action and a fun fact. The board lets you play your bird in the forest, grassland or wetland and each corresponds to a food action, laying an egg or gaining more bird cards. Sounds crazy, right? The game itself is also just beautifully designed and the facts are reputable—informed by the Cornell Lab of Ornithology and the Audubon Guide to North American Birds. Lou Ann Harris, with the Sacajawea Audubon Society, enjoys playing this game. In a nutshell (or an eggshell?), you will have your bird watching retirement plan ready after a few rounds of Wingspan.

This has been a favorite of Christina Koch’s since it came out in the late nineties. It is pretty much a smorgasbord of every game type. Players roll dice and land on different colors on the board. Four categories correspond to each color and include trivia questions, language riddles, drawing and a star performer—think charades. Before Covid, the Thompson Hickman County Library had game nights and this one was popular given its wide scope. “It has a little bit of everything mixed in so there’s something for everyone,” Koch, assistant librarian at Thompson Hickman, said.

Hitting a little close to home perhaps, the concept of Pandemic will be easy to understand. Basically, you are trying to stop four different diseases from taking over the world. This game is cooperative, meaning you work with those you are playing with to make a series of decisions to decide how to stop the diseases. Characters include scientists, medics, researchers and dispatchers. Cards correspond to different locations on the map. An infection deck is created at the beginning of the game which infects cities before the game starts. You have the option to cure or eradicate diseases, the latter which feels so victorious if accomplished. The game is won when all diseases are cured.

The way Ottey described this game made it sound like a physical version of Tetris. Players role dice and based on the numbers place wooden pieces on a coordinate grid. Other colored wooden pieces have to fit in different spaces. A variation of The Genius Square is The Genius Star, which takes the square game board and transforms it into a star, making the spatial reasoning a bit more complicated. “Those both have been really popular,” Ottey said, and are available at the Bozeman store.

Before the pandemic my significant other and I would have monthly to bimonthly game nights with another couple. We would have some drinks, play a few games and not end up getting home until past midnight. It was a way for both of us to get out of the house and socialize a bit, something we both get a little uncomfortable about.

Come March and the Stay at Home directive, we got creative and were able to play two different games online with our friends. One was Catan, which I will explain more about below, and another was Cards Against Humanity—an inappropriate version of Apples to Apples.

This has been a fun way to stay connected to our friends and keep that element of socialization. And in a practical sense, there is no game clean up when you are playing online…

Catan is a popular physical board game in addition to having an online format and the concept is the same on both. Players place roads, settlements and cities on the board and once the point values add up to 10 in the original game, a winner is crowned. The online version is a little wacky, but once you find the browser that supports it best, it is no problem. Find it here; less than $10.

Sagrada is similar to Wingspan in how pretty it looks. This is a dice game mixed with a bit of puzzle-ing—more commonly called dice-drafting— and has a physical as well as an online version. Players match dice they draw to either a color or number on the stained-glass window board. The idea is that you are creating your own version of the windows inside La Sagrada Familia in Barcelona. In a sense, you can get your travel bug out playing this game, too. Find it here: published by Dire Wolf Digital (maker of several digital board games); $10 or less

Wingspan also has an online component worth checking out and there are many apps for the classics like Scrabble, Monopoly and other card games.

Ars Technica, a technology news and science publication, has a component called Ars Cardboard that lists, describes and reviews tabletop and online games.