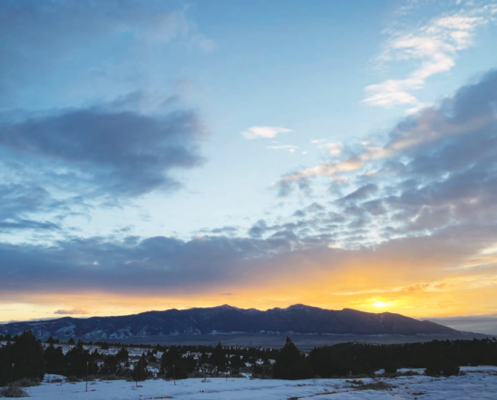 People (and bears) using the outdoors to refresh

Wed, 03/25/2020 - 10:46am
By
Keely Larson
connect@madisoniannews.com
“The changing of the season is always a reminder that things are hopeful,” David Delisi said.

It is crucially important to take care of ourselves in this time of uncertainty. New information unfolds daily and change is the default. Sometimes, to remember the bright sides, you just have to take a step outside.

With gym and studio closures, more are outside for runs, hikes or dog walks. Thankfully, Montana offers many escapes, mentally and physically, from the onslaught of coronavirus news.

Exercise boosts the immune system. Performing just a single workout has shown positive effects on immunity, but the type and amount of exercise play different roles.

In a study conducted last year with mice, immune cells in active mice were shown to cluster around infections. This study was in response to questions about marathon runners and whether they saw decreased immunity immediately after a race.

Marathoners’ systems showed immune cells flooding into the blood stream while exercising, but disappearing as soon as exercise stopped, presumably dying due to exercise stress, reporting by the New York Times explained.

The study with mice showed that these cells did not die, but rather clustered to vulnerable areas, the gut or the lungs, as infection entered the bloodstream.

Exercise does not have to be a marathon to count towards boosted immunity, however.

“Whether you’re going for a hike or a run, the first step is always the hardest. Once you take that step, you’re really glad you did,” David Delisi, Ruby Habitat Founda- tion Outreach Coordinator, said.

Getting out of the house and getting some fresh air is good for all of us, Adam Johnson, Parks and Trails Director with the Big Sky Community Organization (BSCO), said. BSCO is grooming three times each week to try and enable trail access for all.

“It’s that ability to deal with stress and anxiety. We all deal with it differently and for a lot of us, it’s getting outside and getting that exer- cise,” Johnson said.

On a different level, being outside positively impacts mental, not just physical, health. Focusing on the stilless and stability of nature allows the mind to slow down, desperately needed in chaotic times.

Hearing the water, seeing the birds, feeling the temperature change is a form of sensory meditation. It can be humbling and soothing to focus on these components of nature and remember our place in the world, Delisi said.

“The changing of the season is always a reminder that things are hopeful,” he said.

The sun continues to rise, birds return from migration and bears come out of their dens with or without the coronavirus.

Remembering that continuity also heeds some reminders about wildlife this time of year. 2019 saw more bear encounters than previous years with five people sustaining injuries and two grizzlies euthanized as a result.

Bear attacks happen in surprise settings, when a bear is found on the defensive. This could be in areas with dense brush, near animal carcasses or when a cub is nearby.

Grizzlies are listed as threatened on the Endangered Species list, but their population has expanded out of the monitoring area. An estimated 750 bears exist in the Greater Yellowstone Ecosystem (GYE) and they have become densely populated in southwest Montana, a press release from FWP stated. Recreationalists, even amid coronavirus, should always be prepared for an encounter. Carry bear spray and travel in groups. Those tactics proved life saving for people who survived attacks last year.

Keep exercising, go outside and take comfort in knowing that while times are uncertain, this too shall pass.