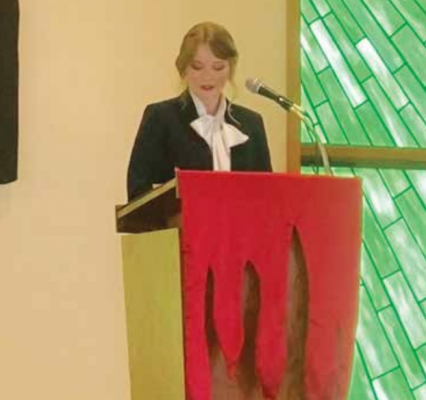 Head in the clouds

“He’s currently sleeping in the chair that is for other people to sit in, and I’m trying to find a way to discourage him from doing that,” Reynolds said during her first day as Madison Valley Presbyterian Church’s new pastor.

Thomas Jefferson was a rehome cat—one she found on Facebook from a family with a toddler who did not get along with the cat. The toddler could only pronounce the name Tom and when she adopted him, Reynolds decided his full name would be in tribute to our third president. She also has a cat named after the wife of our fourth president, Dolley Madison.

“When I was in high school, I just really took to my AP U.S. History teacher and I loved U.S. History,” Reynolds said. That class was everything to her at the time, she said, and her teacher was phenomenal. He instilled the love for history in his students and was an excellent enough teacher that most students in the history class in Kingsport, Tenn. flew by the national exam with a four or five.

Another influential figure came in the form of her Western Civilization instructor during college in Knoxville. As a Political Science major and History minor, Western Civ was required. Reynolds had the intention to stick with U.S. History classes, as that was her passion since that class in high school, but she fell in love with the Western Civ instructor’s teaching style. Through that class—the instructor’s jam was reformation history—and the Presbyterian Campus Ministry, Reynolds started to develop an interest in theology and scripture.

As the end of her undergrad career drew near, Reynolds anticipated getting a master’s in public administration. Her direction started to change as she noticed the feedback on her case studies was similar—she was too idealistic.

“There’s really no great way to say that,” Reynolds laughed. “I realized I wasn’t going to be the type of person who can make the sort of really tough calls that bureaucrats and politicians sometimes have to make.”

“I wanted to keep my head in the clouds a little longer,” she said.

In 2018, Reynolds went to seminary in Richmond, Va. and got her 87 credits done in three years, using summer and winter sessions to meet those ends. Covid got in the way during her second year and complicated some of her internship experiences. Instead of the way one tends to think about internships, Reynolds learned more about what was not going to work for her than what was. Namely, large congregations were not for her.

Reynolds had visited and vacationed in Ennis before, “And just never quit thinking about it,” she said. She perused through the Yellowstone Presbytery job openings a couple of years ago and was not seeing a lot of options. She put out a few more feelers in February and found an opening in Ennis. “My jaw kind of dropped and I was like, no way,” she said after finding what appeared to be the perfect fit.

She got an interview, got the job and drove from Richmond to Montana with a friend from seminary. The pair visited Yellowstone together and Reynolds got to stand in the Madison River for the first time.

“Standing in the river and I was like, oh my gosh my entire personality is going to become this river. And now all I think about is how bad I kind of want to be on that river in a kayak,” Reynolds said.

This first-time pastor is thrilled to be living in Ennis. Sentiments about the town that came to mind as she described her feelings were ‘enamored’ and ‘in love.’ The move from the south was not as jarring as she expected it to be, but she is noticing the difference in social lives between the city and a small Montana town.

“I’m used to sort of a burgeoning social life and being able to walk out of my apartment and be on a city street around people my age and places where I can sort of easily mingle,” she said.

It comes down to perspective and expectations, though. At 26, Reynolds said just about every pastor knows that congregations are aging and would not take up the mantle if they were not interested in working with people older than themselves. Reynolds described herself as an old soul. “I sort of think there’s nothing nicer than a good cup of coffee early in the morning and quietness and sort of taking life a bit slower than you can on the east coast,” she said.

Reynolds’ first sermon at Madison Valley Presbyterian is on Father’s Day. She tries to have three sessions with her sermon material before presenting it to a congregation.

The first involves reading and familiarizing herself with the scripture of focus for a particular Sunday, then she dives into research. Then, she investigates who may have written the text, what the world looked like when it was written, what language it was written in, and what contemporary adaptations of the text exist. At last, she outlines and writes a draft.

Anyone with a history or liberal arts background looks at that method and feels at home.

“I kind of haven’t stopped smiling since I’ve been here,” she said.

This story was corrected on 6/16/21 to note that Reynolds went to high school in Kingsport, Tenn., not Knoxville.