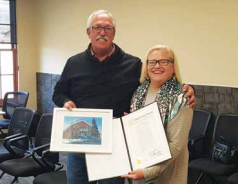 The Hart of the community

Hart was also presented with a framed photo of the historical courthouse, gifted from his fellow commissioners and their staff.

In his tribute to Hart, Sen. Daines shared a common quip commissioners Dan Allhands and Ron Nye often heard Hart utter following the completion of a project: “You done good.” Daines seconded that sentiment regarding Hart’s service, commending the former commissioner for his calm demeanor which “allowed him to rise in stature across our great state.”

In a message to his community Hart recently offered his gratitude as well, writing; “Thank you residents of Madison County for taking in a flatlander from Eastern Montana in 1977. It’s been a Wonderful Life! We worked well together, initially to teach our kids. We played hard, as coaches, teammates, and officials. We sometimes even disagreed a bit, but I’ll always remember shaking hands in the end.”