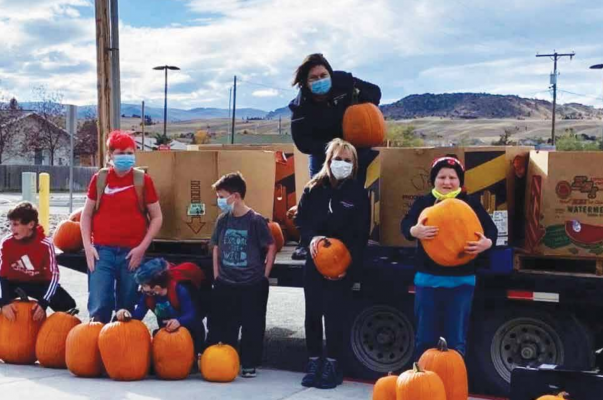 Community comes together for the kids despite Halloween cancellations

“Oh my gosh it was so much fun,” Corinna Christensen, REMAX agent, said. “The kids seemed like they just picked the one that equaled their body mass.”

Madison Foods provided the pumpkins. Christensen expected 300, 6-inch or so sized gourds and when she and Bill Mercer, REMAX owner and the brain behind the giveaway, went to pick them up, they were surprised. Christensen joked that it would take all day and five trucks to load all three pallets of 300 pumpkins.

Christensen Rentals brought over a flatbed trailer and a skidster with forks, helped load the pumpkins onto the truck and made it so the REMAX crew could stand on the trailer and hand out pumpkins, allowing for social distancing while being involved in the fun.

The Halloween kids’ festival typically held in the school gymnasium was canceled this year due to coronavirus concerns. “We were trying to figure out a way to be a part of the community and make the kids feel special,” Laura Gilmore, broker with REMAX, said, while not being able to physically be in the school.

Gilmore, Christensen and Mercer are all part of the Lion’s Club and Gilmore is also a member of the Woman’s Club. Both of these clubs and many others typically host booths at the festival. In a normal year, the gym is full of community organizations getting together to create something special for the kids. In a COVID year where that was not possible, the pumpkin giveaway took its place.

“This has been such a weird anomaly of a year,” Gilmore said.

As with many nonprofits and community organizations, the Lion’s Club experienced a loss of fundraising events. Their auction was canceled, the Fourth of July barbecue was a no-go and the bingo table during the school Halloween celebration did not happen, which is usually one of the Lion’s Club’s biggest fundraisers. Even though fundraising efforts were not ameliorated as a result of the pumpkin giveaway, both Gilmore and Christensen loved seeing the smiles on the kids’ faces.

“It was a lot of fun to see the kids get so excited to pick out a pumpkin,” Gilmore said.

“They were really cute and really grateful,” Christensen said.