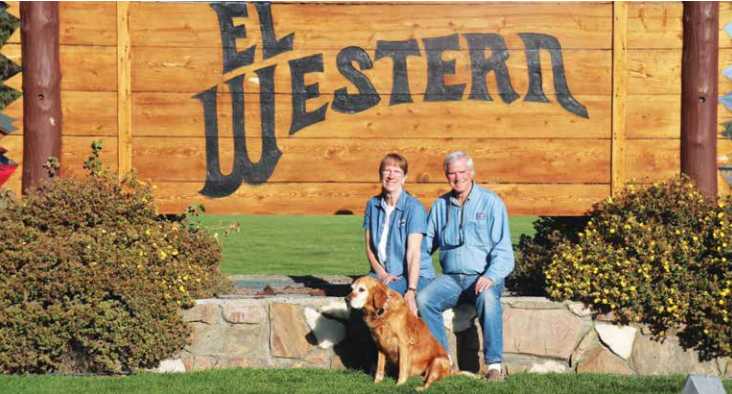 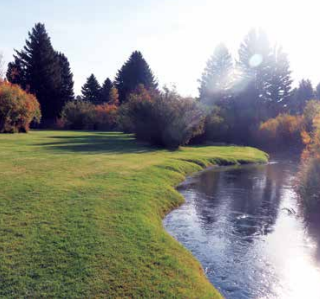 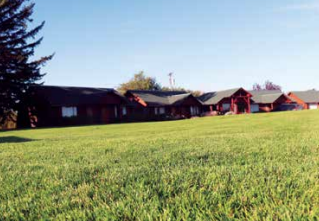 The grass really is greener

One of the nicest gestures El Western owner John Hauck ever experienced was given by a guest who likely had no idea he was being kind. John was watching as the guest paused as he crossed the lawn. The man grabbed his phone, bent over, and snapped a photo of the impeccably tended blades of grass.

“That was a great compliment,” John recalled with a smile. Guests, he said, are drawn to the property by the lush green grass, and they return because of the impeccably clean cabins. He credits his dedicated maintenance team for the landscaping and housekeeping crews for the cozy cabins that complement the head-turner of a lawn.

El Western’s lawn is truly a conversation starter in the Ennis community, and it’s a topic the motel’s owners, John and Kris, are happy to discuss. It all starts with help from Mother Nature: the property’s shallow aquifer, located at just eight feet, is key, as well as the deep, nutrient-rich topsoil.

The lawn takes work and dedication, too. It’s watered daily and mowed every four days in the height of the growing season. It’s fertilized twice a year, aerated in the fall, and thatched in the spring, “And that’s it,” said John, who noted that drainage from the lawn draws the roots deep as the water returns to the aquifer. “It’s a just a lucky location.”

It may come as no surprise that the Haucks receive daily comments on their verdant lawn. Certainly, the lush landscape is a draw to the property, located on the eastern end of Ennis.

The motel’s history, however, deserves some credit as well. That history will take a new turn soon, as the Haucks recently announced they’ve sold the business and will conclude their management of the motel as of Sept. 30. When it comes to the Haucks, the story really began in the late 70s. Kris’ parents, Ted and Bobby Bjork, purchased the El Western in 1979, becoming the third owners of the property which was first opened in 1948. Ted, who had been working as a marketing vice president in magazine publishing, was looking for a new career. On a snowy November day the couple visited the property – the rest, they say, was history.

Over the next 18 years the Bjorks restored and expanded the El Western, turning an unused restaurant, the Country Kitchen, into a tackle shop, adding cabins and improving the lawns.

Their daughter and son-in-law, Kris and John, took the reins in 1997. After more than two decades as “Air-Force gypsies,” the couple, along with their children, Brian and Lauren, settled in a home on the property and, recognizing a need, turned the tackle shop into a conference and events center.

Over the years the El Western has welcomed guests whose stays often last weeks or even span a summer. Some family traditions lasting more than five decades have involved stays at the El Western. Kris can recall many a longtime customer’s request for a specific cabin they’d fallen in love with over the years.

During their final days running the hotel, the Haucks recounted fond memories of happy guests and the relationships they formed with their boarders. El Western is steeped in Ennis history, snippets of which the Haucks learned over the years via conversations with returning guests. Knowledge of the property’s original owners, Neil and Maude Morgan, have been gathered by the Haucks over time.

In fact, the 70-year-old blankets have some noteworthy history of their own. Kris recalled meeting a guest in his 70s who told her all about them – he said he once worked for Jack Frost, the company that made them, and had sold those exact blankets to the Morgans. Jack Frost, said Kris, was eventually purchased by Pendleton.

The Morgans’ son Tom also had a hand in bolstering business in Madison County. In 1973 he purchased R.L. Winston Rod Co., bringing on a partner who introduced bamboo rods, and moving the company from San Francisco to Twin Bridges in 1976.

The steam engine situated in the field across from El Western’s main office is a remnant of the Morgans. Neal was a collector and restorer of old steam engines and once had a number of them lined up along the highway. The one that remains, said John, was likely floated down the Missouri River to Fort Benton and ultimately here, where it was used by the Forest Service to run various implements. It was even used by a McAllister family to run their sawmill until they got a diesel engine.

When the Haucks first arrived on scene John thought it was a good idea to decorate the engine with Christmas lights to make it look as though it was running. It was a festive task that ultimately became a tradition. “Somebody else is going to have to do that,” said John with a chuckle, recalling many a cold year stringing the lights with his wife.

“We got to where we could do it pretty fast,” said Kris.

The Hauck’s memories and relationships related to their muchloved business are innumerable. While they look forward to their next chapter, their nostalgia for all that has conspired at their little green oasis, the place they’ve called home for more than two decades, is strong.

“I’ve told people, in this process, we aren’t selling our business, we are selling our life,” Kris said, tearing up as she sat in the sunny office of the motel. “It’s our roots.”

John agreed, adding, “This has been in the family for 42 years, and has been the home away from home when we were in the Air Force, it’s where we came back to. We have a lot of emotional ties here, and that’s been the hardest part.

” With their days soon to be wide open, the Haucks, who are currently building a home in Ennis, plan to travel and spend more quality time with their grandkids. They’re also looking forward to, after 24 years of busy warm months – including June 2021, the busiest June they’ve seen in four decades – a true summer off.