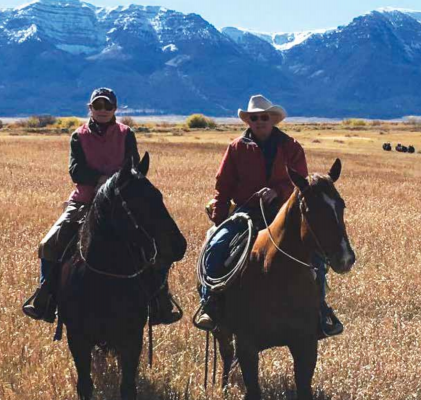 Gary Donald Clark was feeding cows and fixing fences on a Thursday afternoon. “You can always go fix a fence somewhere,” he said.

The Clark family has owned and operated the Quarter Circle One Ranch since 1885 when Clark’s maternal granddad bought the ranch. Morris Kilner had eight siblings and sold his portion to his brothers which included a section the Clarks still ranch today. His dad’s side of the family homesteaded on Indian Creek in the 1900s.

This history along with Clark’s interest in the continuation of ranching culture resulted in his induction into the Montana Cowboy Hall of Fame (MCHF) on Oct. 13. His granddaughter, Taylre Sitz, compiled information for his nomination. One living and one legacy inductee are chosen from each of the 12 districts. Madison County is represented in district 12.

“Gary Clark is a man of many titles. He is a husband, a father, a friend, a mentor, and to his grandkids and friends alike, he is ‘Gramp,’” Sitz said. “He loves cattle and he loves his family. He has worked hard all his life to provide fuel, fiber and food to the world by raising quality cattle and preserving the wideopen spaces of the Madison Valley.”

Clark was not completely convinced he deserved this nomination. Due to the title of the hall of fame, Clark felt he was not a good fit. He was a rancher, not a true cowboy who participated in the sport of rodeo, he said.

MCHF and the Western Heritage Center (WHC)’s mission is to, “honor our cowboy way of life, American Indian cultures and collective Montana Western Heritage.” Both organizations serve as a resource to those who wish to see this way of life passed on.

“Well, that’s pretty much I guess what I promoted,” Clark said after hearing the mission statement.

Clark was in a 4-H program in Ennis when he was younger and raised sheep, cattle and horses. “I think it made you more aware of the production and the animals and I guess more than anything, just being around the animals,” Clark said. The Quarter Circle One Ranch has provided 16 steers to the Madison County fair through the Clark’s four grandkids and both their children, Jennipher and David, raised steers and heifers for 4-H projects.

“If you’re ever involved, you’re always a little bit involved regardless just because you care enough,” Clark said about 4-H.

The Quarter Circle One Ranch shifted through the years to produce what worked for the time, making changes as needed. According to family history, it was the first to raise alfalfa in the Madison Valley. The ranch raised sheep along with cattle until about ten years ago when wolves became too much of a problem.

“It’s not easy after you had them all your life and you can see it’s not economically feasible, and besides the stress that goes with it, you just try something else,” Clark said.

Angus beef has come a long was in the past 40 years from Clark’s perspective. Good carcass traits like marbling and gainability add to the beef ’s productivity, which is typically compared between breeds. The ranch tried a milking/beef crossbreed from Europe at one point when exotic breeds were becoming mainstream.

“The Angus breed has probably done more for the industry than most of them (other breeds),” Clark said. He gradually converted the ranch over to black Angus cattle in the 1970s.

In addition to work-based changes, Clark has bounced back from quite a few personal situations.

He fractured his skull after being bucked off a horse who ended up making it to the National Finals Rodeo in Oklahoma City twice and contracted brucellosis presumably from a cow elk fetus he cut out of a carcass for Jennipher to take to her high school biology class. He received a degree in agricultural production from Montana State University while taking a year off to help his mother run the ranch after his parent’s divorce.

“He is the first to lend you a smile and ask how your day is going when you pull into the yard. He will beat you at chess every chance you get, and if you are running a little late, he is likely to catch and saddle your horse. He is kind. He is humble. He works so very hard, and he is so deserving of the MCHF nomination,” Sitz said.

The extended family is still involved in the ranch. Colten works there fulltime, and the others would show up in five minutes if he called them, Clark said.

“It’s not like they abandoned us or anything, which is really appreciable because without their help we probably wouldn’t be in the ranching business,” Clark said.

“I was really happy for my dad to be honored,” Jennipher Brozovich said. “I feel blessed to have grown up on a ranch and for my kids to have the same experience.”