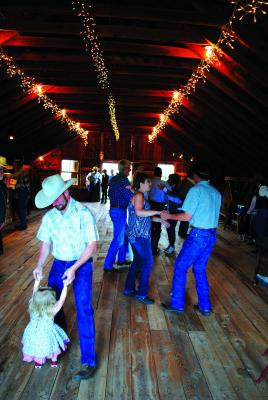 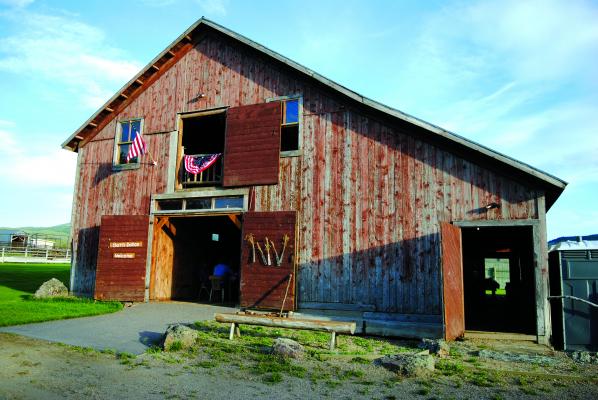 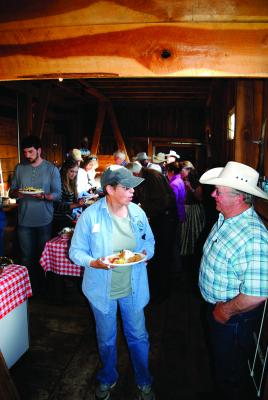 Carrying their contributions for potluck dinner table, they were greeted at the entrance by Barb Pearson, organizer of the event, and Jim Anderson, Ruby Dell’s owner.

“If you haven’t met anyone in the Ruby Valley, this is the place to do it,” Larry said, anticipating a night of socializing and fun awaiting inside the barn.

Pearson explained that the “old-fashinoned, Western, foot-stompin’ barn dance and potluck supper, the first of the year, was continuing event held at Ruby Dell Ranch, that the ranch had been a dance location since the barn was cleaned in 2012.

Anderson explained that the old, two-tier barn had once been used to raise “buggy horses,” Morgan horses, who pulled light, simple, two-person carriages during the 19th and early 20th centuries.

Looking at the short stalls, he believes the barn was a nursery for mares and their colts, as the colts were weaned from momma’s milk. Some 1,000 horses came through the barn, he said.

Anderson’s grandfather bought the property during the 1930s, he said, and the barn came with it.

Since that time it has hosted a wedding – Anderson officiated, and he and Pearson also provided the music for the event, he said – as well as other barn dances.

The order of the evening was eat, then dancing.

While dishes clanked and conversation flowed on the barn’s first floor, the hayloft is where the dancing would take place. The rafters were festooned with Christmas tree lights, and a sound system, drums, guitars, and violin awaited musicians and crew.

After dinner, the loft came alive with the gentle rhythms of good country music – George Hamilton’s 1963 hit, “Abeline” kicked off the music.

Families – mom, dad and kids of several ages, from infants to teenagers – shared the evening and the music, with fun had by all.

Pearson said more barn dances are planned, with another coming up on Labor Day.